Happy Thursday, friends! As always, we have a rhyme to share as part of Angel Sammy's Thoroughly Poetic Thursday challenge.

Every week, our host shares a photo prompt to help guide us on our poetic endeavors. This week's prompt is this image here:

I thought that was such a sweet photo. For one reason or another, it had me wondering how those two individuals first met each other. Then, for another or other reason, that idea snowballed into me thinking of the scene when the two humans first meet in the animated film 101 Dalmatians. Has anyone seen that movie and remember the scene when Pongo and Perdy's humans meet? It has a little something to do with them walking two spotted dogs and literally running into each other. I don't know why that's where my mind went, but my poem ultimately ended up as a silly rhyme inspired by that concept. As always, my poem therefore ended up having very little to do with the original photo prompt. If you care to read my meandering and perhaps boring poem, here it is:

Bongo and Birdy looked forward to their daily walks.
They knew it was walk time when their humans put on their socks.
That being said, Bongo and Birdy did not know each other.
That is, until one fine autumn day in the month of November.

In case you're even the least bit confused,
Let us give a bit more detail about these two.
Bongo, to begin, was one cool canine of black and white.
Birdy was a friendly feline with colors that made the dog and cat a lot alike.

Perhaps we should also give some details on the humans?
To begin, Bongo owned Herman and Birdy owned Susan.
Just as was the case with Bongo and Birdy,
Herman and Susan were strangers, to make it less than wordy.
They were also both proud septuagenarians,
Though they would both admit they were lonely every now and then.

Back to the story at hand, though,
We're on a day in November when a brisk wind did blow.
That time in the afternoon did finally arrive,
When it was time to go outside to stroll in stride.

Herman grabbed Bongo's leash on that day.
Way across town, with Birdy's leash, Susan did the same.
They all bundled up against the crisp wind,
And then, on opposite sides of town, their walks did begin.

They all walked here and there and near and far.
When you have perfectly good feet, who needs a car?
Bongo pulled on the leash in the direction of the park.
Birdy did the same, even though it was growing dark.

Herman and Susan both obliged,
Until they realized their furry friends were increasing their stride.
They were now running and going faster than fast.
At that pace, Herman and Susan knew their legs could not last.

You might have guessed where it's going by now,
But these four met when into each other they did plow.
Bongo and Birdy ran nearly headfirst into each other.
Herman and Susan collided next, neither a runner.

It took some time to untangle the leashes and get to their feet.
When they managed it, though, there came many apologies.
Actually, Bongo and Birdy were not in the least bit bothered,
But Herman and Susan profusely apologized to each other.

Again, you might have guessed it, but this all indeed happened for a reason.
Friends were made on that fine day of the autumn season.
It all may have started as a collision,
But of that fact they all soon lost vision.
Bongo and Birdy began a fun game in the grass in the park.
Herman and Susan took a seat on a bench, not caring that it was now dark.

That evening was the first of a great many,
When the four of them would keep each other company.
They would oft walk together or meet in the park.
It never mattered if it was daylight or dark.
Bongo and Birdy were best buddies from that day.
Herman and Susan, never again lonely, were the exact same way. 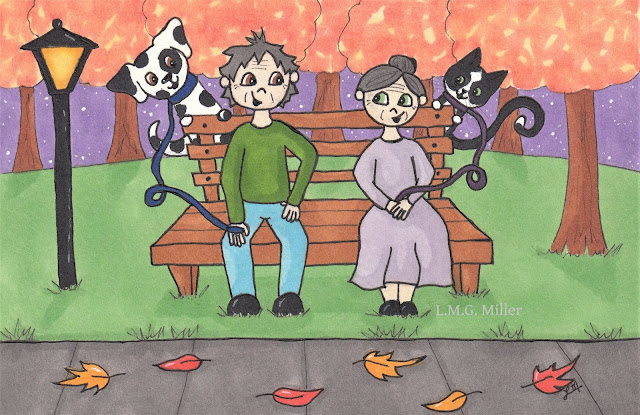 
Now, of course, it's time for Thimble and her Thankfuls on this Thursday. 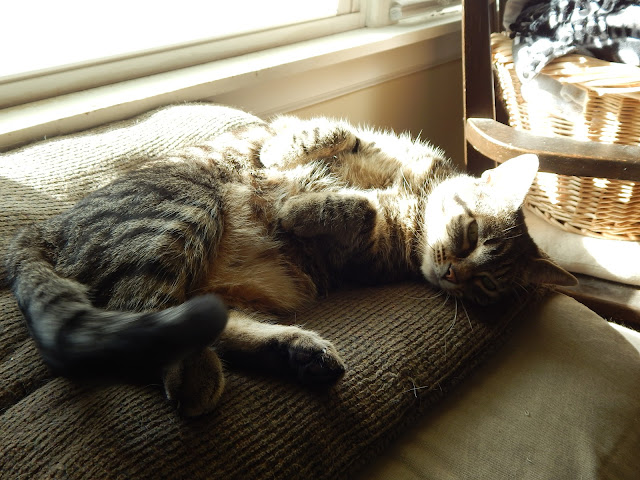 Unsurprisingly, Thimble is grateful for window seats and the glorious sun puddles they provide. Of course, both she and I are also thankful for that adorably fluffy tummy of hers. Thankfully, Thimble loves a good belly rub, which makes this here mom of hers very happy.

As always, we're also incredibly grateful for this wonderful blogging community and the friends it has provided us. Sending all of you purrs!


We're not finished with our Pet Cancer Awareness Month tips just yet. Today, we want to remind you all that, just like us humans, it is possible for our furbabies to be affected by cigarette smoke, and cancer could potentially develop as a result. For this reason, if you smoke, avoid doing this in the home or around your kitty or pup. In addition, when out in public, do your best to keep your furbabies away from areas where smoking is common. Smoking affects more than just the smoker, so for the sake of both yourself and your furbaby, do try to avoid it.
Posted by The Menagerie Mom at 5:36 AM

Oh what a darling poem.............TWO couples rather than one! I love the accompanying doodle too - PERFECT.

Your poems are always so awesome.

I'm all ready for the fill-ins. Thank you for co-hosting the fun.

Bongo and Birdie are such sweeties, we loved your poem and we love seeing the happy Thimble too. Thanks for joining the Thankful Thursday Blog Hop!

Again, our animal companions know more about us than we do!
Lovely story/poem, and your doodle is purrfect.

Such a sweet photo and poem. And Thimble, you're a beauty!

What a happy way to meet! Thimble is beautiful on her window seat.

There, i rhymed and didn't even mean to!

Thimble is such a cutie. I love you fall header and the drawing for this week' poem. Very cute poem too. And excellent tips. I hate cigarette smoke.