We've been sharing guest selfies every Sunday for the past couple of weeks. We're doing this as a way to introduce you to all 12 of my parents' kitties. We of course have more guest selfies for you today, and these selfies star a little lady named Gilly. 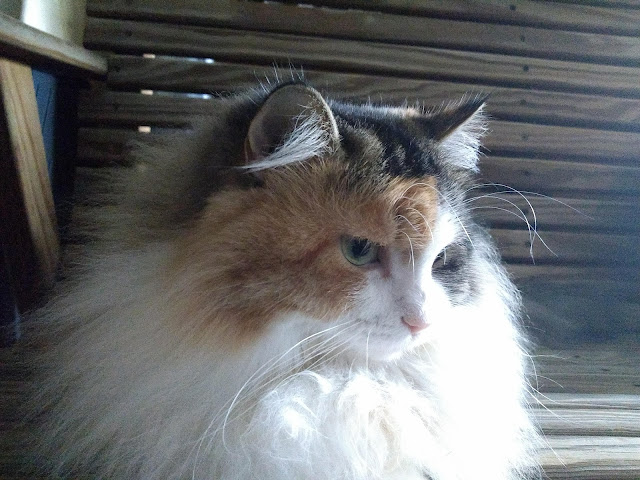 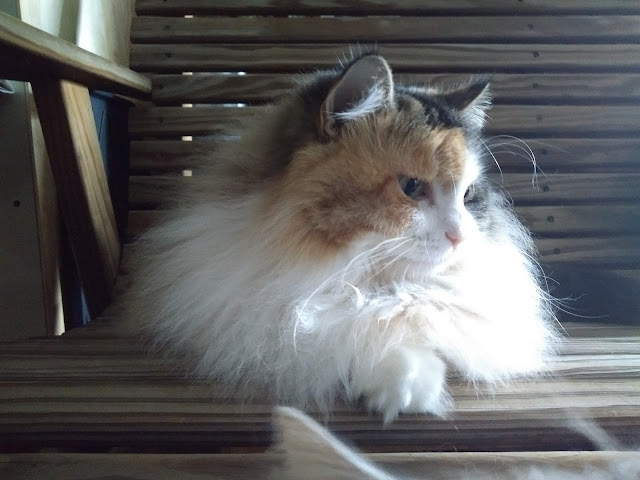 Isn't Gilly one fuzzy gal? Don't worry, Gilly knows exactly how cute she is. If I'm being honest, though, I do wish that Gilly had been a bit more willing to pose for the camera during this photo shoot. She is an incredibly photogenic girl, but she really wasn't into this particular photo shoot.

Now, the story of how Gilly found her way to my parents' home is actually a rather simple one. In short, in the spring of 2016, my twin uncles had a friend who had a cat who had kittens. This friend was trying to find a home for these kittens, and he ended up bringing one of the kittens to my uncles' house. My uncles were not able to home a kitten at that time, though. But that's okay, because my dad saw a picture of the kitten, fell in love with the fluffy little calico, and brought her home literally hours after seeing her photo. 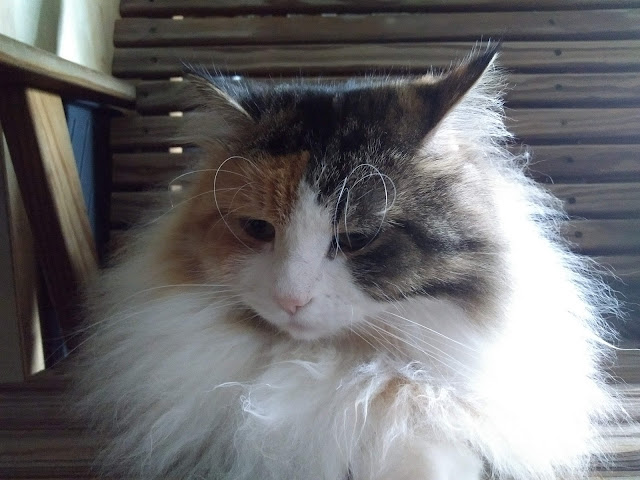 Gilly is by far the fuzziest cat in the entire family. Our housemate Toby is one fluffy boy, but his fur is nothing compared to Gilly's. I'm especially fond of Gilly's stunning tail. So is Gilly. 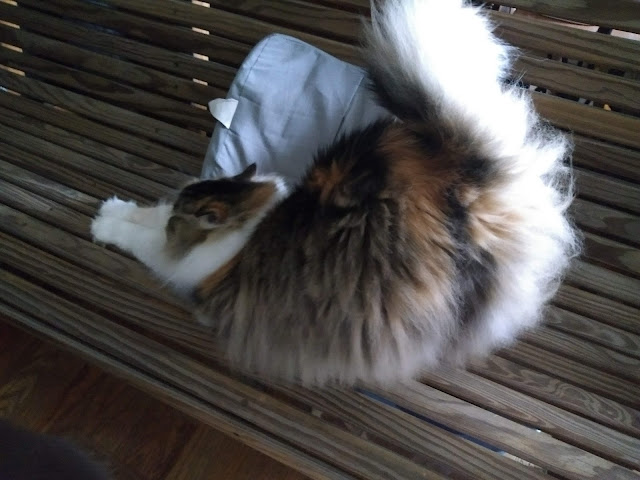 That photo really does no justice to Gilly's tail. I can't believe I failed to capture a better shot of it for this post. I will most definitely work at getting a shot of Gilly's tail that actually does it justice, so that you all can truly see the fuzzy masterpiece that it is.

I always try to share some fun facts about my parents' cats as we introduce them, so I'll share some tidbits about Gilly now. First, as innocent and sweet as she looks, Gilly is known to stalk the other cats in the family. If you see Gilly sitting all cute and sweet while staring at the couch, that means she has someone cornered behind it.

Another little fact about her is that she is deceptively small. All of that fur on Gilly's body makes her look like a decently sized cat. When you pick her up, though, she feels as light as a feather. Even her veterinarian has commented on how petite Gilly really is, though her layers of fur betray that fact.

Oh, and Gilly talks to lights. If the sun hits your phone or anything else shiny, she'll have a prolonged conversation with the resulting lights that dance on the ceiling or wall. The only other time Gilly really talks is when she's playing with toys, especially if she brings you one and wants you to acknowledge her gift.

We hope you all enjoyed getting to know Gilly today! She is a sweet little lady! Except for when she corners other cats behind couches, that is.

My sister and parents are all out of town this week, and I'm taking care of all of their furabies. My sister's cats (Toby and Winky) already live with me, so taking care of them is nothing all that new. But, as I mentioned above in this post, my parents have 12 cats. These kitties are all very well loved and well cared for, and so they're of course used to lots of cuddles, food, and litter scoopings each day. I'll be spending lots of time not only with my furbabies this week, therefore, but also with my parents' kitties. My dad also has nearly a dozen fish aquariums, with more fish than I can even count, and so I'll also be trying to make sure I feed the right fish the food this week. So, since my schedule will be a bit different and perhaps slightly hectic this week, I'm very temporarily cutting back my art time and will therefore be sharing more flashback doodles than usual. Our usual schedule of doodles will resume next week, or more like this upcoming Saturday.

All of the above rambling being said, today's flashback doodle is one that I chose in honor of the fact that I've recently been trying to work through my to-read list. This list is terrifyingly long, but challenges can be fun, right? There's also the fact that crisp autumn days are the purrfect time to read. 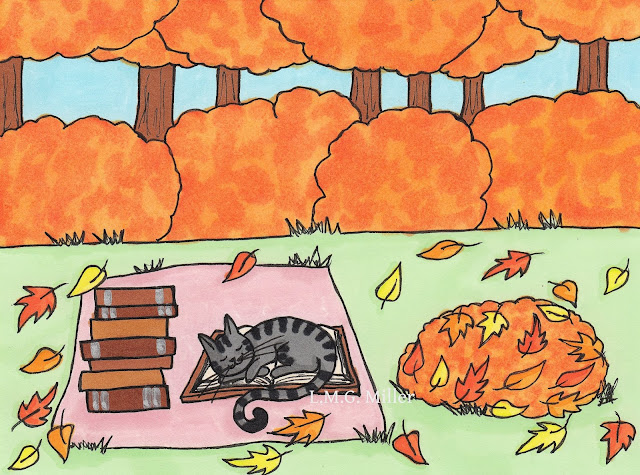 We've been discussing the safety of our furbabies when it comes to common Thanksgiving foods. This topic would feel incomplete without a mention of none other than stuffing. Is this Thanksgiving staple safe for your furbaby? More than likely, it is best that you simply avoid feeding any of that stuffing to your kitty or pup. Why? Because many stuffings include ingredients such as onion, garlic, salt, butter (which could especially be a problem for furbabies with lactose intolerance), and other components that could have uncomfortable or dangerous side effects. If the stuffing is plain, without any potentially dangerous ingredients, then a small taste might be fine for your furbaby. But, more than likely, that Thanksgiving stuffing will contain some ingredients that are best avoided in your cat or dog's diet.
Posted by The Menagerie Mom at 2:39 AM

Gilly really is one fluffy girl, and I can imagine that tail must be a labour of love and a joy to behold.
Lots of appreciative purrs
ERin

Oh what a beautiful and most fluffy little lady Gilly is! Nice to meet you Miss Gilly.

Wow, we think Gilly is the floofiest kitty we've ever seen!

What a pretty and fluffy girl ! Nice to meet you, beautiful Gilly ! Purrs

Gilly you are so beautiful! It's nice to meet you! And you surely are floofy!

Look at those floofy tocks, and it's not even Tocktober - MOL! Gilly is a stunning girl, have a great week pretty one.

Gilly is absolutely adorable. She sounds like a lot of fun too. Sounds like you have your hands full caring for your family's pets, but I am sure it is fun.
I like your drawing, books and cats go together so well. Excellent tip too. XO

A dozen fish tanks? Wow!
Gilly is a floofy princes; love her!

We really enjoy meeting you Gilly. You are one fuzzy feline fur sure. Yes we know the difficulty of catching a photo of a fuzzy tailio. Dad is always chasing Einstein to do just that

What a gorgeous girl she is!!!

Gilly is gorgeous and I bet she knows it too. I love her fuzzy coat and that wonderful tail.

She sounds small but mighty!

Sorry to be so late, I am prepping for a craft fair and got all behind. Gilly looks totally gorgeous, her fur, her colour and her ability to be an elasticat.