We have some guest selfies for you again this Sunday. We've started a bit of series of posts starring my parents' 12 cats, since multiple of you friends of ours mentioned that you'd like to meet this clowder of a dozen. So far you've met my parents' kitties Trapper and Talon, who are the litter mates to my girl Thimble and our housemate Toby. Today, we have two lady cats for you. These girls are Gemma and Freya, and they began living with my parents in July of 2015. We'll start with Gemma. 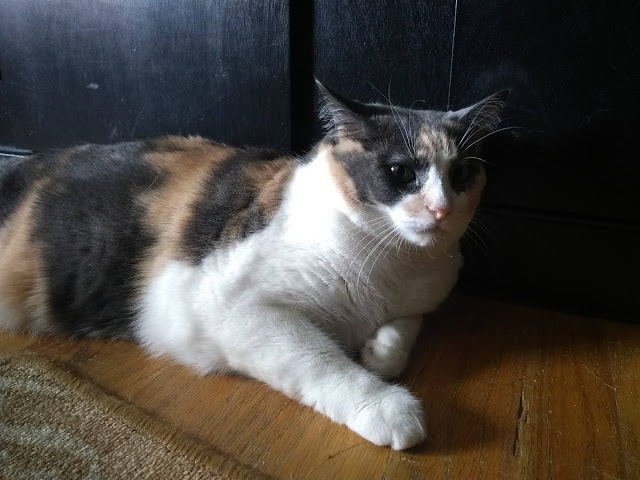 As you can see, Gemma is a gorgeous dilute calico. Gemma was the first calico to join the family after we lost our 21-year-old calico angel Rosie. My mom knew she wanted another calico at some point after losing Rosie, since Rosie gave gorgeous calicoes such a good name. My mom knew a calico would someday enter her life when it was meant to be, but she also mentioned how wonderful it would be if one revealed itself for her birthday.

My mom's birthday is smack dab in the middle of July. So, one day smack dab in the middle of July 2015, I went to the pet store for cat litter. This pet store showcases kitties who are part of one of our local cat rescue groups, to help them get adopted. I walked in that day, and the first thing I saw was a dilute calico kitten face staring at me from one of the cages. My dad was actually with me that day, but he was in the car. So, I of course said hello to all the kitties, got a good look at the gorgeous calico kitten, checked out my cat litter, and went out to the car. I told my dad about the calico kitten, and he immediately wanted to see it. He went in, saw the gorgeous calico kitten for himself, and within 30 minutes he had gone home, gotten my mom, taken her to the pet store, and they were filling out an adoption application.

Guess what, though? Calico kitty had a sister in the cage with her. This kitty was a dilute tortie. Of course, my parents could not allow the sisters to be separated, so there they were filling out two adoption application, one for the calico now named Gemma, and one for the tortie now named Freya. 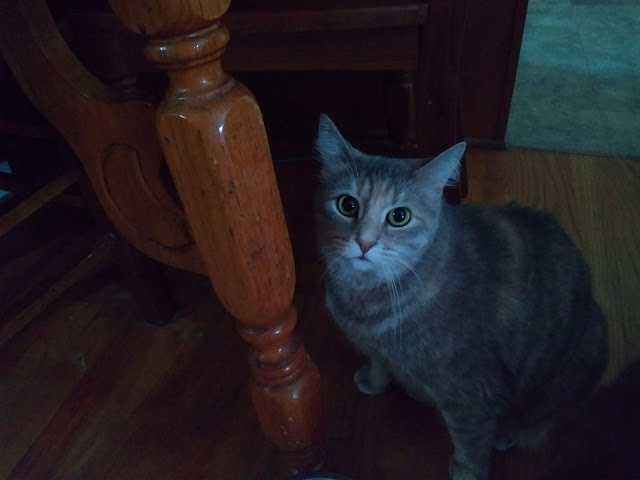 That photo of Freya right there does absolutely no justice to how gorgeous she is. It does, however, give an indication of her personality. You can actually see in both Gemma and Freya's above selfies that they aren't too keen on having a camera shoved in their faces. Actually, they're not too keen on having anything in their faces, not even the faces or hands of the humans they like.

The cat rescue group from which my parents adopted Gemma and Freya were open and honest about the fact that these girls were semi-feral and skittish little ladies trapped out in the country. My parents understood that and were perfectly fine with it. It indeed took a long time for these two little ladies to come out of their shells, especially Freya. Freya actually had to be put on anti-anxiety medications when she was barely a year old because she just needed a little extra help feeling secure. She no longer needs those medications, though, because though she is still a skittish girl on occasion, she is really very happy in her home and loves spending time with her humans. So does Gemma.

In case you're wondering, though these girls were more or less birthday gifts for my mom, they are both complete and total daddy's girls. They love my dad so much. Though they started out semi-feral, they both now enjoy sitting with their humans, but most especially with the leading man in their life. Gemma has actually become quite a lap cat, and you'll often find her sitting on my dad's legs when he's watching TV in the evening. Freya is more likely to sit next to you rather than on you, but you will indeed often find her curled up next to my dad. These girls also both love food, and they're always both first in line to get the daily canned food feedings.

Now, how about a couple of fun facts? When my parents brought Gemma and Freya home, at that time they only had two other cats, those being the boys Trapper and Talon we've already introduced. We mentioned in Talon's post that he loves anything and everything that lives and breathes and moves. Needless to say, when my parents brought Gemma and Freya home, Talon took to them immediately and thoroughly enjoyed showing them around the house. I honestly believe that it was Talon's attentiveness that really helped these semi-feral girls come out of their shells.

Second fun fact? Though it was Talon who showed them the ropes of living in their forever home, Gemma ended up forming a crush on Trapper. She still constantly seeks him out and forces him to cuddle with her. He's given up fighting it, because she is relentless in her pursuit of his love.

And how about a third fun fact? My dad named Gemma and Freya. His main goal in naming was them was to give them pretty names. Why? Because, obviously, they're pretty girls, and my dad knew their names had to reflect that. The cat rescue organization from which they were adopted had given Gemma the name of Mia and Freya the name of Dawn. But, as you can tell, they didn't keep those, and they have been known as Gemma and Freya since they were 10 weeks old.

Okay, that's all the fun facts we have for now. We hoped you enjoyed meeting Gemma and Freya! It's not exactly easy to get selfies of these girls, because anything being shoved in their face is a big no-no, so I don't do it often. But, we managed a selfie of each, and though they look thoroughly annoyed in them, we hope you can also see just how gorgeous they are.

***
Doodle of the Day: Flashback Sunday

I usually share a new doodle rather than a flashback doodle on Sunday. I even have a doodle all planned out for today. That being said, between fun Halloween activities, followed immediately by a really early Thanksgiving family gathering for which I spent an entire day baking pies and an entire day visiting with said family, I didn't get today's doodle done in time to post it today. So, I went through my doodles from last November, in search of one that caught my eye. I ultimately saw one that I'd completely forgotten I'd doodled, but that gave off what I hope might be cozy autumn vibes. I figured that was a good enough one to share today. 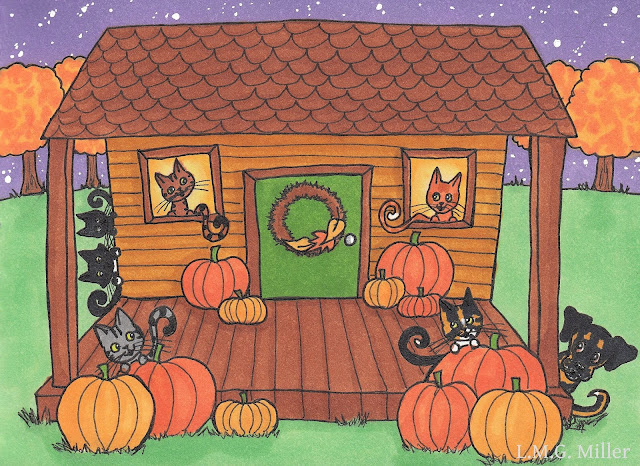 Our pet cancer prevention tip for today is about food. Quality food, that is as natural and nutrient-dense as possible, is important for our furbabies for a variety of reasons. One such reason is to promote a healthy immune system that can sufficiently ward away diseases, including cancer. Foods of poorer quality not only put a kitty or pup at risk of an unhealthy immune and other systems, but can also potentially contain ingredients that are less than beneficial to their health overall. For both our furbabies and ourselves, some artificial ingredients and preservatives in certain foods have even been found to be potentially carcinogenic. For this reason and others, if possible, please do consider a high quality diet for your furbaby. Foods with natural ingredients are most ideal, as these will of course provide natural nutrients that can help keep your furbaby healthy and happy all around. As most of you already know, food plays a large role in life for a vast number of reasons.
Posted by The Menagerie Mom at 4:54 AM

Aww, Freya and Gemma are such beautiful girls indeed. I am also a daddy's girl, when it suits me.

We had no idea your parents had 12 cats! How cool! Freya and Gemma are beauties.

Wow, what an awesome story about how Freya and Gemma came to live with your parents! We loved the part about how Talon helped the sisters know they were safe and loved. Good job on those selfies, too, Gemma and Freya! :)

Freya and Gemma are beautiful. What a wonderful story, your parents are definitely Superheroes! A dilute calico, I'd never heard that before, our Peaches is one too. When a Tortie has white paws, they're called 'Piebald' - horrible name - I refuse to call my beautiful Stella 'Piebald'!

Beautiful girls, both of them! Gemma is a dilute calico just like my girl Asami, though she's got a lot more patches of color than my girl :)
And I love the fun facts about how they integrated into the family :)

Your parents sound like the nicest people- as well as you and your sister too. Such beauties. Dilute torties are my favorite. My Angel Lucy was one and Joanie is too. I don't mind a repeat drawing, especially with a Halloween theme :) Excellent tips too. XO

Gemma and Freya are beautiful ! Nice to meet them ! Purrs

They are absolute beauties and we're so happy to meet them. Did you know that Mudpie's name when I adopted her was Gemma?

Thank you for sharing two more of your extended feline family. They are both beautiful, and in attitude not unlike myself when it comes to folk getting up front and personal, MOL
Have a wonderful and happy week.
Purrs
ERin

Sorry I am late to the Selfies. Work got in the way and it makes stuff a bit of a struggle, but I'm here :-) Freya's picture makes her look a bit mysterious I think.

Have a good week.

Aww, what a cute story about Gemma and Freya's adoption! I know what it's like to fall in love with kitties at the pet store; that's how Da Boyz found us.

What a lovely way to expand your family!