I don't know if this is really a spooky doodle or not, but I was in a spooky sort of mood when I scribbled it up. I was actually watching a show in the suspense and horror genre when I was working on this doodle, and the aforementioned show is largely set in a spooky yet enchanting forest. There are also some creepy crows in this show. That all might explain why my doodle includes some spooky trees, and a crow. Don't worry, though, because of course I also included a kitty in the doodle. 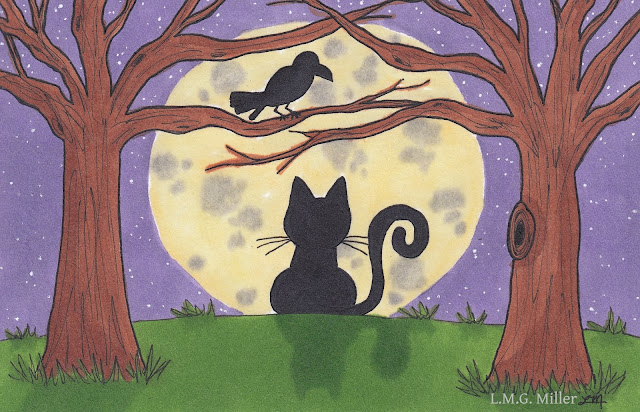 If you're curious what show I'm referring to above, it's a French show that has been released on Netflix in English. It's called Black Spot in English, but its French title is Zone Blanche. I admittedly enjoy the suspense and horror elements it has to offer.

Of course, the above doodle is our contribution to Athena's Caturday Art Blog Hop!

As further explanation, cats' claws curve downward in a way that makes climbing up a tree relatively easy for them. This is because the curved claws can hook into the tree as the cat scales it. This same curvature of the claws, though, can make climbing down a tree headfirst difficult if not impossible for a cat. The curvature of the claws would instead make it easier for a cat to climb down a tree backwards, as that would allow the claws to hook into the tree. When it comes to Norwegian Forest cats, though, they're somewhat known for successfully traveling down trees headfirst. This is quite possibly due to their ancestrally inherited hefty musculature and strong, thick claws, which could allow them to better grip a tree even when going down it headfirst.
Posted by The Menagerie Mom at 2:36 AM

We like the doodle a lot. Intresting about the Norwegian cats. I sure didnt know that about their claws. You all have a Super Saturday.

This is why there is a whole network of folks who volunteer to rescue cats stuck in trees! If scared, they race upward, but then don't know how to get back down; going tail-first is too scary!

Love Norwegian Forest cats......have that little bit of "wild" in their look and beautiful fur...........as for the doodle - I like spooky but this doesn't seem spooky to me - just "watchful" !

Very nice doodle. I may need to get Netlfix for that show, it sounds good. I did not know that about the Norwegian Forest Cat.

We didn't know that about the Norwegian kitties. It's furry interesting.

We like your doodle furry much. We get lots of crows around here.

That’s spooky in a not overly frightening way.

That doodle is adorable and the show sounds great! Wow, I did research for a Purrfect 10 post on Norwegian Forest cats and never saw that about their tree climbing!

Cool spooky art. You should have done the crators as cat's paws. MOL! My cousin Julie is a Norweigen Forest Cat.

It might be a little spooky, but we think it's more cute and awesome! :)