I want to begin by thanking you all for your purrs, prayers, and good thoughts for Thimble yesterday! Her dental went well, and she had a crown amputation on the expected upper premolar as a result of resorption. It was also discovered that's she's already lost two lower premolars to resorption, and those teeth were already goners. This girl probably isn't done dealing with tooth resorption, so this was very likely not the last dental Thimble will undergo in her lifetime. Isn't she a lucky girl?

Honestly, though, I am so thankful for all of you and your kindness, and for our wonderful veterinarians. I'm happy to have Thimble home and recovering. She has been requesting extra of her favorite treat, that being baby food, and she's not be denied.

Now, of course, it's time for the Friendly Fill-Ins challenge. In case you missed the fill-in statements yesterday, I'll share them again below. Ellen of 15andmeowing came up with the first two, and I came up with the second two.


I again challenged myself to in some way relate all of my answer to my furbabies, and my answers are below in bold.

2. I know it's time to crank the a/c when Toby or Astrid sprawls out in front of a floor vent.
(Toby is the fuzziest furbaby in the house, and he gets warm relatively easily. Pup Astrid also gets warm easily, especially after walks. If either of them seeks out an air register, which sometimes they'll even do if it's not yet running, I'll make sure the a/c runs for them so that they can enjoy a cool breeze. We don't want the furbabies to melt! I generally keep the a/c set to 72°F or 73°F, and if it gets adjusted from that setting it's likely because a furbaby requested it.)

3. Others come to me when they need their kitty's nails trimmed.
(I'm the designated trimmer of cat nails in my family. This is in large part because I used to work at a cat clinic where nail trimming was one of my primary tasks. I don't mind. I always cuddle the kitties when I'm done trimming their nails, and since there are 18 cats between myself, my sister, and my parents, I regularly get tons of kitty cuddles in return for tons of nail trims. Not that all of the kitties are willing participants of the nail trims, though, or of the cuddles.)

4. We should never take time for granted.
(Time is a precious thing. I especially always try to remind myself of this when it comes to my furbabies. Unfortunately, our kitties, pups, and other furry friends aren't on this earth as long as most humans. Sometimes my furbabies want something at a time that might not seem ideal to me, but then I always try to remember that I don't have forever with them, and I want them to know how much they mean to me for as long as possible. That's why I sometimes find myself agreeing to play fetch while also trying to eat lunch, or being held hostage on the couch when I'm hungry or should actually be cleaning the house, or halting an arts and craft session so that a kitty can play with a marker or two. Make every minute count!)


It's not even the official day of bloopers, but that's what Eddy has to share with you all today. Then again, is that really all that surprising? This is Eddy we're talking about, after all. 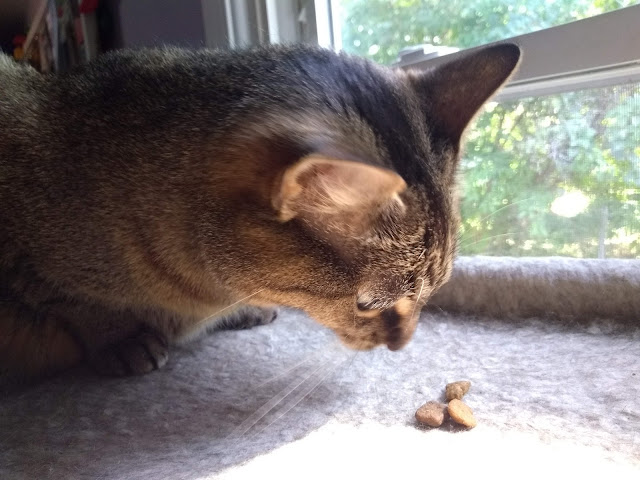 I have a problem saying no to my cats, Eddy of course included. Ever since it was discovered that there's one type of treat Eddy will actually eat and that she actually loves, I've been failing at telling her no when she asks for them every half a second. The fact that I need to keep an eye on her weight aside, I often try to use Eddy's favorite treats to distract her for photo shoots. That's usually a great big fail. 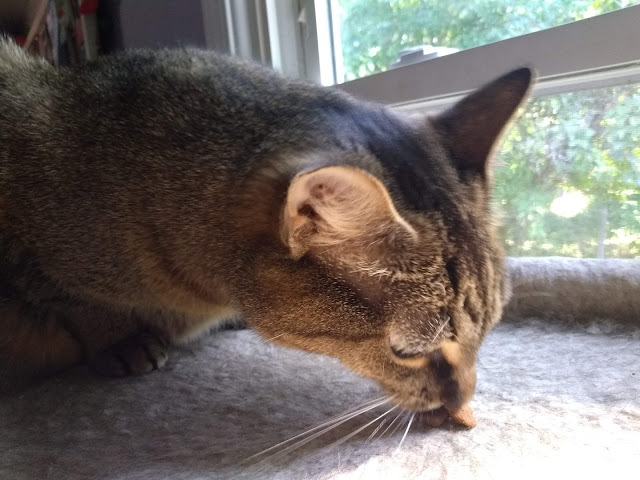 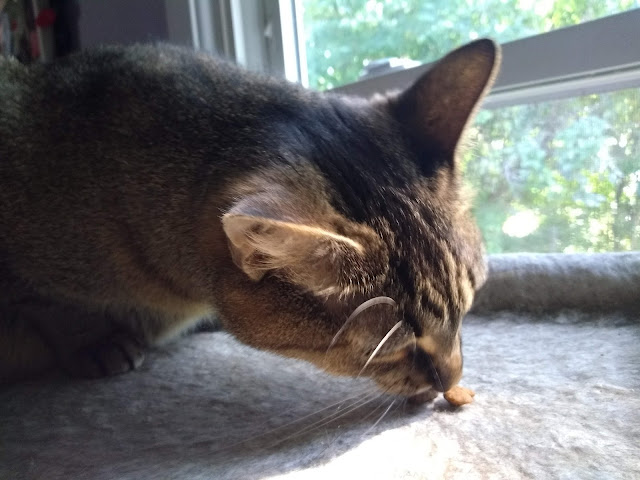 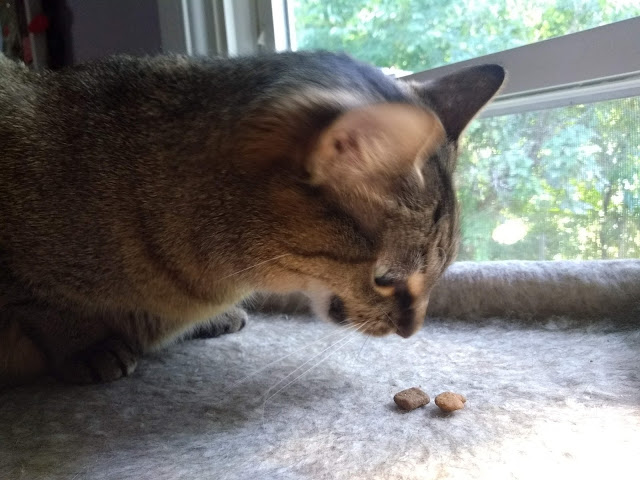 Eddy hopes you all have a treat-filled Friday!


In honor of Thimble's dental yesterday, today's flashback doodle is one from May of 2017, in which I drew Thimble as a nurse. 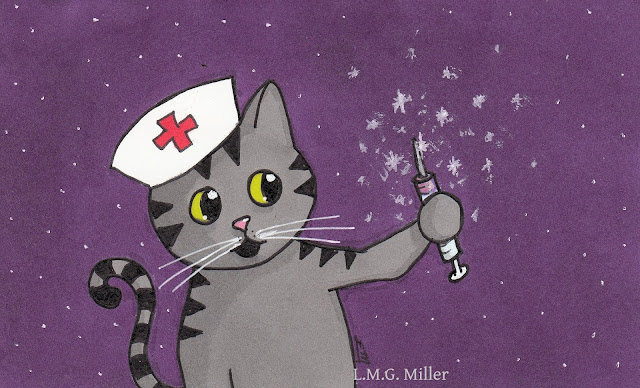 Truth be told, I still remember regretting that syringe I drew the second I finished this doodle a couple years ago. It wasn't even the needle that caused my regret, but the color of the substance in the syringe. I drew the contents of the syringe as pink because rabies and other various vaccines are pink in color. I immediately realized, though, that the drug used for euthanasia is also often pink, and so I immediately wished I had chosen a different color. Let's just pretend it's the rabies vaccine Nurse Thimble is sporting, though.

Did you know?
Did you know that cats bite their nails like some humans do? Cats have a good reason and purpose for their nail-biting, though. Cats will chew at their toes not only for basic grooming, but also to help remove the old, dry outer sheath of the claw. Beneath that old and dry sheath is a sharp and fresh nail. In addition to a cat chewing its nails, the basic act of scratching on a post or other surface is another way they help remove old nail sheaths in order to expose the fresh claws beneath. This shedding of the outer sheath of a nail is a perfectly normal thing in cats, and it's why you'll sometimes find dried husks of cat claws around the house.
Posted by The Menagerie Mom at 4:36 AM

Thimble I'm sure you're happy that's over with - we are glad you did well with the procedure and hope you're all healed up before you know it!!!

So important to keep those teeth clean. Healthy teeth make for a healthy kitty.

Love all your fill-ins.

Have a fabulous day and weekend. Scritches to your babies. ♥

I am glad Thimble's dental went well. Great answers to all the fill-ins. I am impressed at all the nails you trim. And I completely agree with #4, our pets are with us for such a shorty time that they deserve all the time we can give them.
Great shots of Eddy too, she is a cutie. And I like the drawing, I Never made that awful connection to euthanasia, yes, it is a rabies shot.
Have a wonderful weekend! XO

18 cats! WOW! And I heard a good line while watching an old cowboy TV show rerun: We don't own life; we only rent it. So giving hugs, and smoochies, and smiles is always the bestest thing to do!

Poor baby! I hope any pain she was in is completely gone now. If only they could tell us when something isn't right! Love your #4...SO true.

That's most welcome news, that Thimble came through it well.

Great answers for the fill ins, and of course that is a rabies vaccine.

Glad Thimble survived. Amen to your answer 4. I keep telling Pop that when he refuses to work from home. I'm getting up there in years. BTW, you are needed to cut my claws. They catch on everything.

We hope Thimble hangs in there. Bear knows how difficult tooth resorption can be. He's had five or so dentals in his lifetime - all with extractions. And one tooth that literally fell out on its own. I still brush his teeth though, so I guess it could be worse.

I'm glad I found this blog through messymimi and others on writing prompts. Love your cat doodle!