First of all, Evan and I thank you all for the purrs and prayers yesterday! As we mentioned yesterday, Evan went to the vet for an area on his left side that he licked to near baldness. My wish was that there was a simple and manageable reason for this, and my wish pretty much came true. 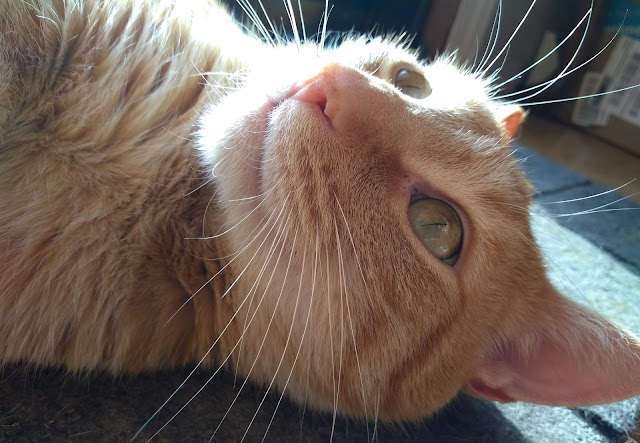 That there boy of mine was diagnosed with licking and hair loss that's of a psychogenic source. In other words, Evan has possibly decided to lick that particular spot on his side when bored or anxious. The strange thing is that, in general, Evan is my calmest cat. He's the one cat in the house who will happily spend hours curled up on the couch next to me or napping on my bed. He's usually a pretty chill fella, but apparently he's become a tad bit neurotic nonetheless. 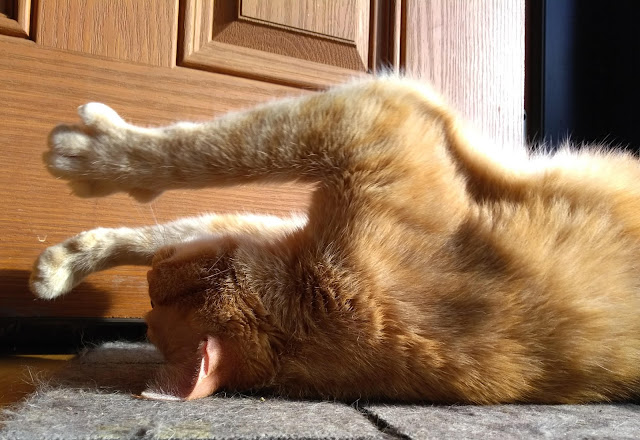 The vet prescribed amitriptyline, a drug that can help treat anxiety in cats. I'll be giving him the transdermal version in his ear, and we're going to try that for a month to see if Evan stops licking his left side bald. After that month, depending on whether or not the amitriptyline has helped, we'll decide how to continue.

On a side note, a conversation I had with the vet today made me realize something I've never really clarified here. As most you have probably noticed, I often refer to Evan as hind limb paralyzed here on our blog. He is that, but also not exactly. In his hind legs, Evan technically has what's called paresis, or partial paralysis, rather than full paralysis. 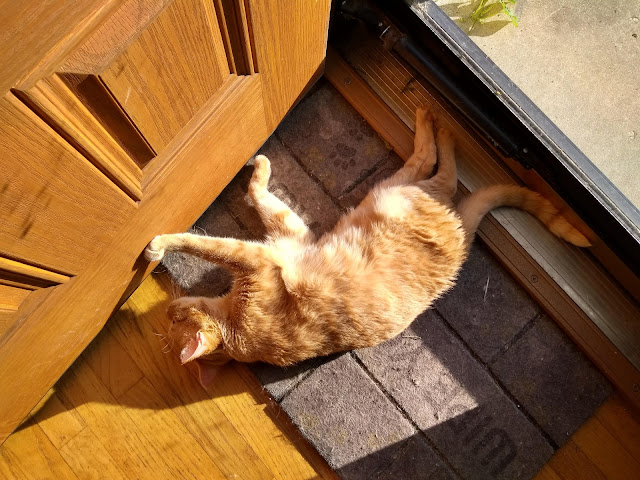 Evan most definitely cannot walk on his back legs and instead drags them behind him when he walks, and he also cannot pull them up to scratch his ears or anything of that sort. That being said, although it is minimal and delayed, Evan actually does have some minor feeling and minor neurological responses in his back legs. If his back toes are pinched for a few seconds, he will ultimately make a sort of twitchy attempt to pull his leg away, or he will sometimes spread his toes. Because Evan does have even this minor feeling and these minor neurological reactions in his hind legs, his condition is technically paresis, or partial paralysis, rather than full paralysis of the hind legs. I do most often refer to him as hind limb paralyzed when speaking of him, though, because that just makes things quick and easy and requires less explanation. But, I thought I'd throw this out there since somehow I don't think I've ever fully explained that.

I've been sharing forest doodles for the past couple of days. That's why I decided that for today's flashback doodle I'd share yet another forest doodle, but of course this time one from the past. The one I chose was scribbled up in June of 2018, and was actually created to illustrate a poem I wrote for Angel Sammy's weekly Thoroughly Poetic Thursday challenge. The poem was titled "Finnigan in the Forest". 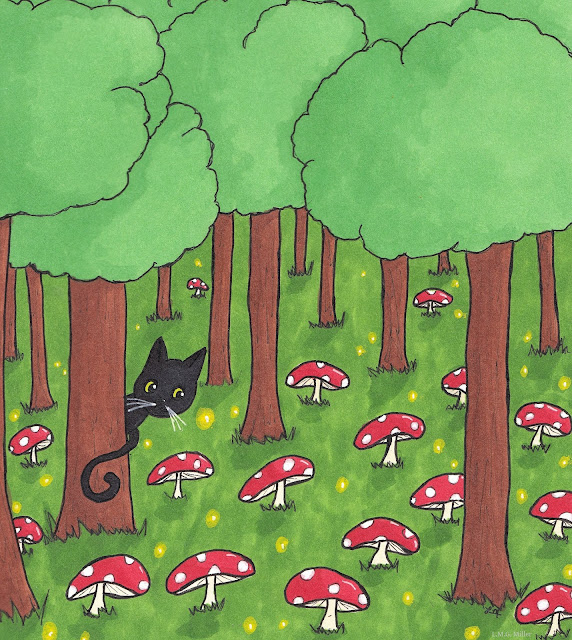 ***
Did you know?
Did you know that a French cat named Felicette was the first cat in space? On October 18, 1963, the French sent Felicette into space, and she is said to have been in space for 13 minutes. Electrodes were implanted on her skull, which sent neurological signals back to earth. Most of the data retrieved from this feline space trip was of good quality, and Felicette survived the flight. As another fun fact, Felicette was a tuxedo cat and the media of her time began calling her Felix after the cartoon Felix the Cat, who we mentioned in yesterday's fun fact. Given that Felicette was a female, though, Felix became Felicette.
Posted by The Menagerie Mom at 12:41 AM

Bear overgroomed his belly for years. He'd take much of his fur off his belly - and under his arms. Our vet didn't think we needed to treat it - just keep an eye on it. I don't know what changed - but I noticed a couple years ago that he wasn't doing it anymore. Maybe adding The Boy to our household? Or Bear's sister? Cats are so fascinating - it could be anything!

Well Evan we hope here that the medication will help you feel less anxious so your furs can grow back and be that beautiful gingery color ALL over you!!

We hope the medicine helps. Sometimes it's those seemingly calm ones that keep all their anxiety inside.

Evan I was over grooming when I was stressed from brofur Einstein. I stopped without medication after Dad did a lot of positive reinforcement of my being his special kitty and giving Einstein other things to do besides bother the rest of us. We purr you are back to better in a month or so. It took me about 4 to stop and grow back in.

Hmm, I wonder now if I should try the CBD oil cat chews that I've purchased for my two old lady cats, Sweetie and Angel...and give one to The PO'M every day! How can an outside cat be stressed, but he is definitely licking his belly clean of fur. Thank for the the added info about Evan, but I agree with you that simplest is best when describing health issues.

I hope the meds will help Evan. I did not know that Evan had any feeling in his toes, that is interesting. I also didn't know about the first cat in space. Cute drawing. XO

WE so hope that Evan will stop licking himself so much. That is very interesting that he is a little feeling in his toes. Sending lots of purrs to you Evan.

We knew about the French kitty in space, but thought she had not survived so we were glad to read that !
With Evan having soe feeling in his legs, it's good to know that he can feel some things, which might help keep him from getting hurt.

I'm so glad you got some answers. Aren't transdermal meds the greatest thing ever? What did we do without them...

Enigma SissyCat used to overgroom her tummy, and it would get red and inflamed. The vet gave us a salve to put on it, and she stopped and hasn’t done it since. Let’s hope Evan is the same, he will stop with treatment.

Thank you for the clarification about Evan's hind legs. We are glad there's some diagnosis about the licking. We sure hope that transdermal medication helps!