Is anyone else ready to rhyme today? We're ready to rhyme, and thanks to Angel Sammy's Thoroughly Poetic Thursday challenge, it's the perfect day to do so.

Each week, our poetic host shares a photo prompt to guide us. This week's prompt is this historically intriguing one here:

So many things went through my head when I saw that image. I don't even know how to explain how all those things running through my brain matter resulted in the poem below, though. I'll just let you all read it and judge me as harshly as you'd like.

On the edge of town there stood a tower.
The sight of it made the townsfolk frown and glower.
After all, a wicked witch lived behind its stone walls,
Her heart surely as cold and decayed as her tower so tall.

Everyone in town knew to avoid the tower like the plague.
No one would be caught dead there, night or day.
That's why the children of the town found themselves in a pickle,
When their kite landed atop the witch's tower after flying quite fickle.

"Well, that kite's a goner," little Jimmy did say.
Young Ingrid shook her head and replied, "No way!
That kite was a gift from grandpa.
I'm not going anywhere without it back in my claws."

There was squabbling between Jimmy and Ingrid and their friends Mo and Flo.
Ingrid insisted she would not abandon her kite, no, no, no!
Jimmy threw his hands up in the air and huffed.
He said, "Go get your kite, Ingrid, if you're so tough."

"No one can even prove the witch in the tower is wicked."
Those words from Ingrid's mouth left her friends stricken.
"Of course she's wicked," Flo said in a whisper.
Mo added, "The evidence could not be any crisper."

"Mo and Flo are right, you know," was Jimmy's reply.
"The witch is wicked, and that's no lie.
Do you not see the tower's ghosts and demon eyes?
If the witch feasted on children, I wouldn't be surprised."

Ingrid sighed and made a firm shake of her head.
"I'm getting my kite," was all she then said.
Her friends watched after her as she approached the tower.
She could see her kite's tail waving above in the wind's power.

Ingrid tiptoed toward the tower and devised a plan.
She would climb the tree that next to the tower did stand.
As soon as she reached that very tree, though,
She wondered if Jimmy was right about those demons and ghosts.

Night was approaching and the tower's windows suddenly glowed,
And in that golden light forms began to move to and fro.
Then Ingrid saw those flickering eyes.
They watched from the windows, and then from the ground nearby.

Ingrid stood frozen, one hand on the tree.
Should she climb, or should she run and scream?
Before Ingrid could make up her mind,
There came a sight that nearly struck her blind.

With a poof and a flash, a wild-haired old lady stood right there.
It was like she appeared out of nothing but thin air.
"Ingrid, run, it's the witch!" her friends did shout.
They were shrieking and running here, there, and all about.

"What are you doing with my tree?" the witch asked.
Her grey hair went all the way to the ground and hid her face like a mask.
Ingrid was almost surprised she didn't wear a pointy hat on her head,
But at present the girl was also more worried she would end up dead.

The witch repeated the question she had said already.
"What are you doing with my tree?"
Ingrid gulped and opened her mouth.
"My kite," was all that finally came out.

The girl pointed to the top of the witch's tower.
The kite's tail could be seen even in the light of that late hour.
"Oh," the witch said with a nod, "I see."
Then she did something Ingrid could hardly believe.

With the snap of the witch's crooked fingers,
Atop the tower the kite no longer did linger.
Rather, it quickly floated right up into the air,
Until it landed in the hands of the witch with the long hair.

The old woman handed the kite to wide-eyed Ingrid,
And then she even smiled a smile quite kindred.
"Are you going to cast a spell on me now?" Ingrid blurted out.
The witch tilted her head and said, "What on earth are you going on about?
I was actually going to offer you a piece of chocolate cake.
I have plenty, since I quite enjoy taking the time to bake."

With the same poof and flash as before,
The witch was gone and then returned once more.
In her hands she now held a plate with a piece of cake.
The witch handed it to Ingrid as she pushed her long hair out of her face.

Again, Ingrid could not help but blurt out a perhaps rude question.
"Do you have ghosts and demons?" was the suggestion.
The witch laughed and laughed and finally said,
"What on earth would I do with demons and the dead?"
Ingrid shrugged and shook her head.
She pointed to the eyes that glowed nearby,
And to the glowing windows through which figures moved inside.

"Oh, goodness me," the witch laughed,
"You're just seeing my pumpkins and my cats."
As if a light suddenly and magically illuminated them,
Ingrid saw that the glowing eyes belonged to carved pumpkins with stems.
And when she looked to the forms in the tower's windows,
She could now clearly see the forms of cats prancing to and fro.

In case Ingrid had not made the proper revelations,
The witch snapped her fingers and made the facts plain as day.
In her arms, she suddenly held a black cat and a carved pumpkin.
"The pumpkin is Jack," the witch said, "and the cat is Duncan."

Ingrid eyed the cat and the pumpkin, intrigued.
Eyeing the pumpkin, she said, "It's not even Halloween."
"No," the witch replied, "it is not indeed.
But, I like to celebrate all the days in between."

As Duncan the cat moved to perch on the witch's shoulder,
The old woman reached for Ingrid's hand with one much older.
Ingrid at first feared the witch was going to drag her away.
She feared she'd be locked in the tower to never again see the light of day.

What happened instead was that the witch shook the girl's hand.
"You should probably get home," the witch said from where she did stand.
"It was a pleasure to meet you, though, my dear.
I don't get many visitors around here."

Ingrid glanced at the tower before thanking the witch for her kite and the cake.
When the witch smiled, Ingrid thought she at least owed the woman her name.
"I'm Ingrid," the girl said, still more than a tad bit puzzled.
The witch tucked her long hair behind her ear and said, "I'm Rapunzel." 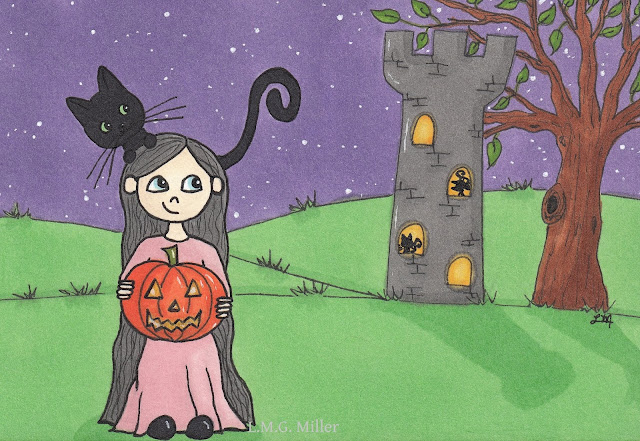 Yes, I did indeed throw a bit of Halloween into the mix. I have a problem. Admitting is the first step.


Now, of course, it's time for Thimble and her Thankfuls. Truth be told, today Thimble is thankful for one of the things she's been thankful for again and again lately. Her gratitude might seem like a broken record, but these things make her happy, so she hopes you don't mind. 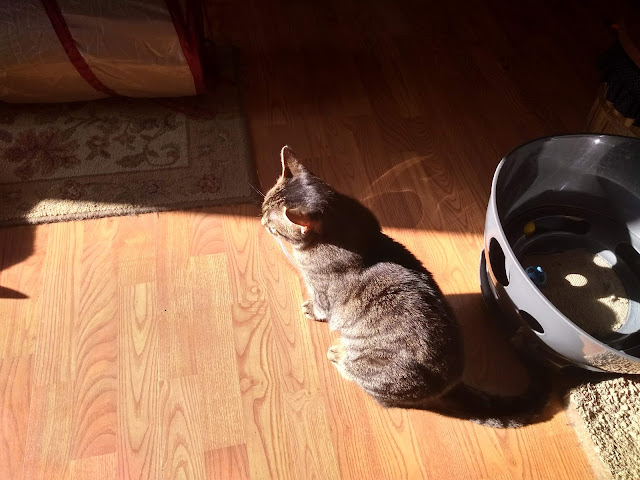 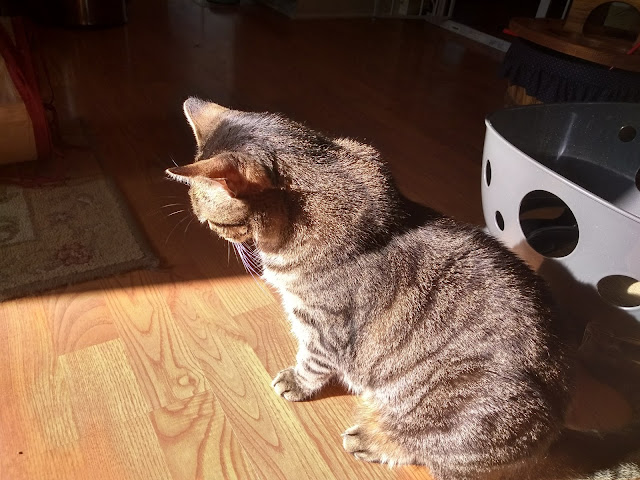 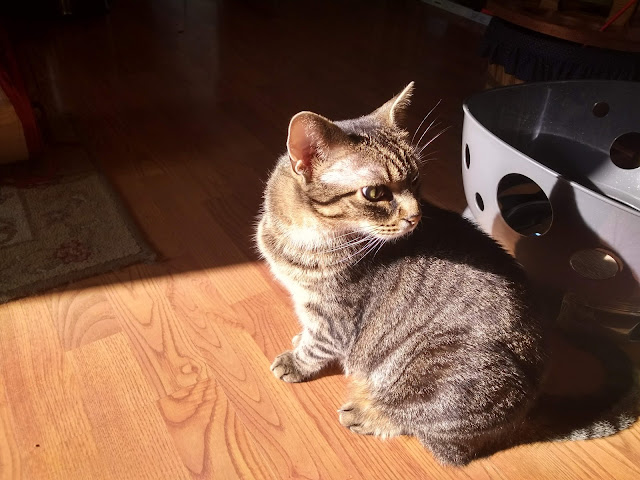 Indeed, Thimble is again thankful for that beautiful sunshine, and for the sun puddles it provides, and for one of her favorite doors that allows the sun into the house. Both she and I are also quite happy with Thimble's adorably good looks. We're not biased, of course.

As always, we're also of course thankful for all of you and your friendship. Thank you for visiting us and putting up with us!

This post wouldn't be complete without the fill-in statements for tomorrow's Friendly Fill-Ins challenge. Ellen of 15andmeowing came up with the first two, and I came up with the second two.

Did you know?
Did you know that snacking on pumpkin can help dogs and cats lose weight, have regular bowel movements, and reduce the number of hairballs vomited? These results of eating pumpkin are all primarily due to its high fiber content. Eating foods high in fiber can help a dog or cat, or even human, feel full, thereby helping them snack less and lose weight. The fiber in foods like pumpkin can also help move things more efficiently move through the intestines, resulting in regular bowel movements as well as hairballs making their way through without a hitch.

Of course, always be sure to monitor how much pumpkin you might be feeding your pup or kitty, and also ensure that you're only feeding pumpkin prepared in a safe and healthy manner. Plain pumpkin puree without any additives, therefore not pumpkin pie filling that also includes spices and the like, is the safest type of pumpkin to feed your furbaby. That being said, pumpkin cannot treat or cure all issues related to the intestinal tract, and it may not be safe to regularly consume for all dogs and cats. If you have any concerns about your furbaby's health, always discuss this with your veterinarian.
Posted by The Menagerie Mom at 6:42 AM

Yikes on all that hair. That would take two days to dry after a wash.

I'm all ready for tomorrows fill-ins. Thanks for co-hosting.

Have a fabulous Thursday. ♥

That was a totally terrific poem and the every beautiful Thimble is such a sweetie. Thanks for joining the Thankful Thursday Blog Hop!

Thimble you are so precious!

Thimble always looking lovely in the sunshine. The poem was just wonderful and we loved the Halloween themed doodle already. Thank you for sharing. Have a fantastic day.
World of Animals

Mudpie is quite thankful for the sun puddle situation as well! That lady's hair makes me think of Crystal Gayle. I loved her as a little girl because of her hair!

That is a wonderful poem and it sure ended up well for that brave Ingrid who met that famous Rapunzel! Great! Thimble it looks like you are having a fine day too

I am glad Thimble got her sunshine :) Great shots of her. I love the poem and the Rapunzel twist at the end. Cute drawing too. And I did know about pumpkin- none of my cats will eat it though.

That poem was fun, and i’m thankful for Thimble and her sunny pictures!

WOW.....I had a feeling Rapunzel would make it into your poem and indeed she did. LOL Loved this story - it was your usual fabulously creative storytelling that gave it a life of its' own. The photo was quite interesting we thought and it sure inspired some GREAT poetry this week! Thanks for playing along with Angel Sammy every Thursday.