It may not be Toesies Tuesday, but my mancat wanted to show off his toesies anyway. 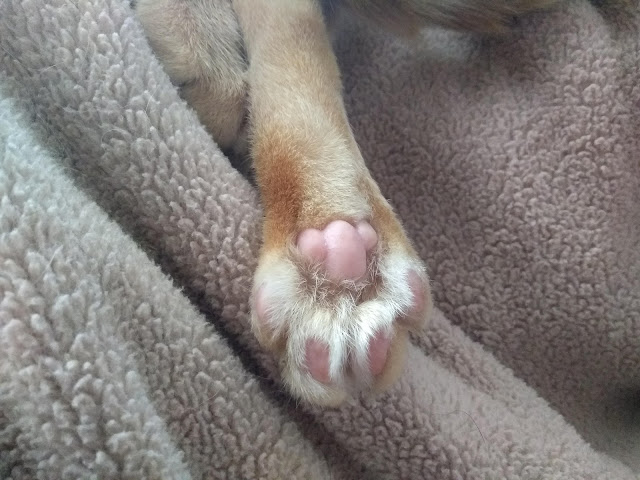 Those are indeed the toesies of one of my boy Evan's paralyzed back legs. I love these toesies.

On another note, I apologize if the lighting is off in some of my photos these days. For some photos, I still use my usual camera. For other photos, I'm trying to learn the ropes of the camera on my new phone (the new phone I had to get because I yet again dropped and broke my other phone). I haven't yet managed to find 99% of the phone's camera settings, so the images I take on it are with whatever settings the camera is choosing without my consent. I feel like the above photo, for example, is perhaps too blue in lighting. Maybe one day I'll figure it out.

Happy Monday to all!

Today's doodle is another wacky summer image with a side of weird wishful Halloween thinking. The only autumnal hints in this one, though, are in the "Hawaiian" shirt that the doodled up Toby is wearing. 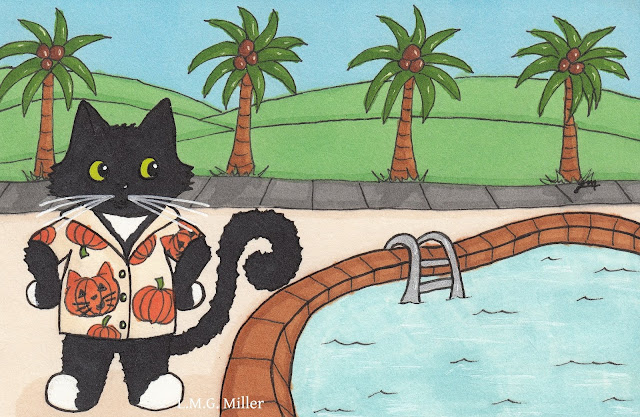 ***
Did you know?
Did you know that a cat's paw pads contain large concentrations of nerve receptors? These receptors allow the paw pads to sense various textures, pressure, and pain. These nerve receptors are also why some cats don't like their paws to be touched. Different cats have different tolerances to their paws being touched. If your kitty doesn't like holding hands, though, it's probably because of those sensitive paw pads, and it's kindest to respect that.
Posted by The Menagerie Mom at 12:03 AM

Those are some cute toesies. Bring on the fall!

What a sweet photo of Evan's sweet toesies!

My favorite thing to do, is to gently poke my finger into my cat's paws, so they then curl their paw around my finger! Love that!

Evan has very cute toesies. Nice drawing. And I did not know that about cats' toes. Most of mine don't mind my touching them though.

Evan, those are some mighty good looking toesies. We really like the drawing too. You all have a super Monday.

Beautiful toesies! Good to know to respect the pads.

Awww, those are some lovely toes.

And yes, it's important to be careful with them.

I want to tickle those toesies!!! And I want a Hawaiian shirt just like that! MOL

Those are some super cute jelly beans! They are the perfect shade of pink. :)