It's Thursday, which means we're ready to rhyme. Thanks to Angel Sammy and his Thoroughly Poetic Thursday challenge, we get to be poets every week.

Our host always shares a photo prompt to guide our poetic endeavors. This week's prompt is this fun one here:

I honestly don't really know how I got from that prompt to my poem. I started out with a dog walker, and ended up with Fang. If you'd like to know more about this Fang, feel free to read my wacky poem below.

Ronnie walked furry friends for a living,
A job for which he gave great thanksgiving.
He loved nothing more than to go on long walks,
Especially when in the company of a furry flock.

Ronnie would never turn away a new furry friend,
And so every call he got was happily answered with a yes.
He got one such call on one fine summer day.
"Can you walk my boy Fang?" the caller did say.
"Of course I can!" was Ronnie's reply.
The thought of a new furry friend always made him smile.

The next day, Ronnie headed out to walk his furry friends.
After all, that had become his favorite daily trend.
He was excited to meet his new friend name Fang,
Whom he had eagerly agreed to walk each and every day.

Ronnie first picked up a mutt named Chuck,
Who also lived with short little pal named Puck.
Then Big Bernie joined them with a wagging tail,
Followed by a hound of a gal named Abigail.
Right after Ronnie and the rest gathered up Dane,
They arrived at the house of none other than Fang.

The new furry friend they found was a bit unexpected,
Though of course Ronnie was not about to reject him.
The original gang of Ronnie's furry friends all jumped back.
They all thought, What on earth is that?

Fang waltzed right on out of his house,
And insisted he be taken on a grand walkabout.
Unlike the pack of pals Ronnie usually walked every day,
Fang didn't act or look any canine sort of way.
His ears were pointed but small.
Except for his tail, he did not stand very tall.

Ronnie's usual furry friends gave this strange Fang plenty of space,
In no small part because of the giant fangs that adorned his small face.
Indeed, this orange and striped newbie named Fang,
He had giant fangs that quite suited his name.

Do you get the picture?
Are you absolutely, positively sure?
Fang was a feline with big, pointy pearly whites,
And they gave Ronnie's usual pack a bit of a fright.

As Ronnie and his furry friends headed out to walk,
Not a single one of them could manage to talk.
They all simply proceeded in silence and held back,
While the newbie named Fang walked at the head of the pack.

Fang pranced and strutted right along,
All while announcing his presence in a song.
He jumped on rocks and fences and deemed everything his.
Not a single thing in his path did he skip or miss.

Still, the usual members of Ronnie's pack gave Fang plenty of space.
They certainly didn't want to get close that fanged face.
In truth, the usual pups of the pack were ready to go home.
They no longer wished to follow frightening Fang as he roamed.

Before they could request their freedom, though,
Off into a patch of grass Fang did scurry to and fro.
He looked back over his shoulder and did say,
"Hey, guys, come join me over this way!"
Fang sprung onto the grass and began to roll.
The meaning of this none of the pack did know.

Fang again requested, "Come on, guys, it's fun!"
Rather than join him, they all wanted to run.
That is, until they realized that Fang was, in truth, having great fun.
It was the hound of a gal named Abigail who first tiptoed over.
Fang stopped his rolling in the grass when he noticed Abigail draw closer.

He asked her,"Would you like to play?"
Abigail didn't seem to have anything to say.
That is, until Fang's fangs were hit by the sun and shone brighter,
And Abigail simply had to ask, "Are you a vampire?
Do you bite?
Do you star in Fright Night?"

"What?" Fang asked with a tilt of his head.
"Oh, no," he said, "I've never turned anyone dead."
Abigail pointed to the fangs and asked, "Then what's up with those?"
With a fanged smile, Fang said, "These are just super-erupted canines, I'm told."
Then he added, "They're no more dangerous than my little pink nose."

When the rest of the pack saw that nothing was amiss,
And that fanged Fang didn't let out even a single hiss,
They joined him and Abigail, though not too quick.
Seeing them, Fang said, "Hey, guys, look at this!"
Again he rolled in the grass with a great deal of fun,
And soon enough the rest of the pack had to play along.

During this break on their nice little walk,
To Ronnie's pack Fang could not help but talk.
He even asked, "Hey, guys, wanna be friends?"
And indeed, they were all friends when this story ends.

After all, Fang's fangs had no reason to offend,
And he made a mighty fine fanged little friend.
Judging a book by its cover is simply not right,
Just like how Fang's fangs truly offered no fright. 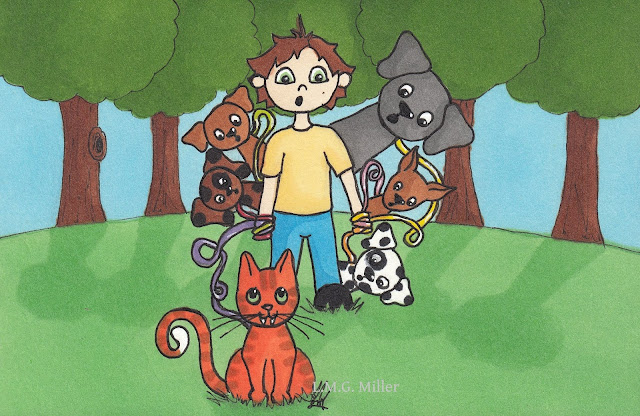 
What's up next? Oh, of course, Thimble and her Thankfuls! 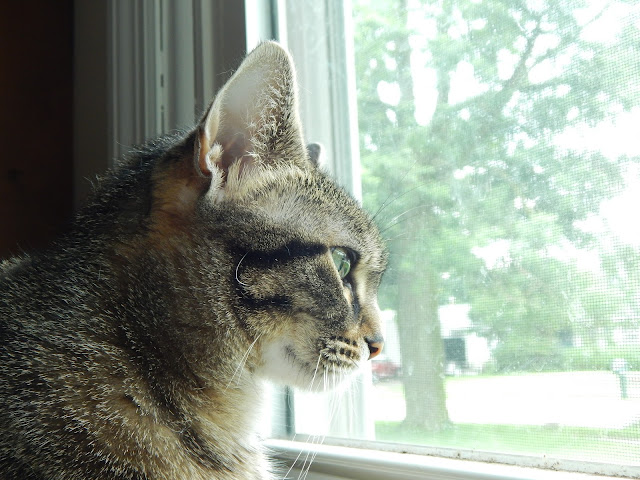 Thimble is thankful for window views, and for neighbors in need of snoopervision. 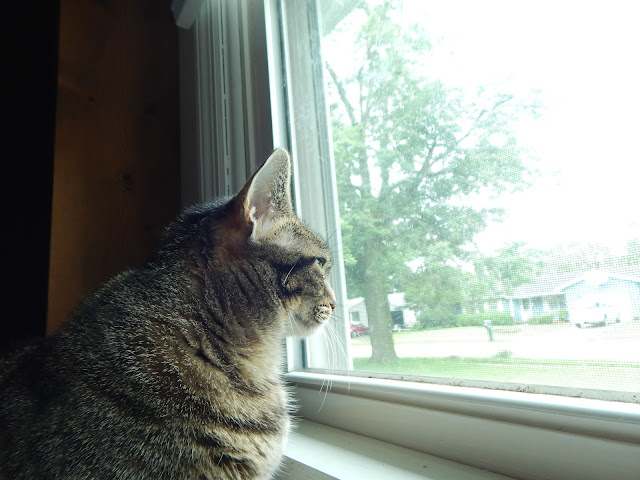 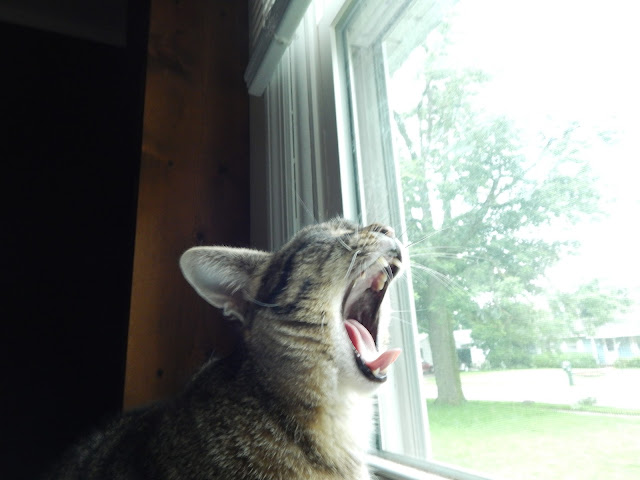 That tongue's pretty darn cute too, isn't it?

And of course we wouldn't go without saying that we're so very thankful for all of you. Thank you for being our friends!

Did you know?
Did you know that a cat's fang-like canine teeth are embedded in sensitive tissue that allows them to know when they're gripping something? The canine teeth are what cats use to kill their prey. Thanks to the pressure sensitivity of the canines, cats can proficiently do just that. The pressure sensitive nature of cats' canine teeth might also be why cats can often refrain from breaking the skin when using their mouth while playing with other cats or humans. Without the ability to know how much pressure they are applying, cats could do significant damage with their canine teeth even just while playing.
Posted by The Menagerie Mom at 6:11 AM

The PO'M lets me put my fingers on his canines, since he so often has them sticking out! Love Fang's story/poem!

Fangs for the cool poem, it was fun! You're always fun to see too sweet Thimble! Thanks for joining the Thankful Thursday Blog Hop!

Thimble doing a great job with snoopervising. It must be some hard to do and after that big yawn. Thanks for sharing the poem and loved doodle. Thanks for the share. Have a wonderful day.
World of Animals

Sweet Thimble, you are so precious! I have a Vampire cat, didn't know there was a term for it - Ebby's gone love the moniker!

That's quite a reaction to your neighbors, Thimble! MOL Love the poem.

That’s a fun poem with a moral to the story, i am glad they became friends. And of course some cats do like to take walks on leashes.

Thimble, i’m sure the neighbors are glad to have such a good snoopervisor next door, or they should be.

Had no idea about cats having pressure sensitive canine teeth!

I LOVE your poem, you are so creative. Cute drawing too. Ad Thimble is adorable. I did not know that about kitty teeth. I look forward to your fill-ins tomorrow. XO

The prompt pic had me in fits of giggles! You did so well with your poem.

What a wonderful story about Ronnie and Fang and the gang. It's also got an excellent message about not judging a book by its' cover. You again knocked it out of the park with this super story-poem! We just love it.