I never have to do anything alone at my house. I don't eat alone, I don't sleep alone, I don't go to the bathroom alone, and I don't doodle in my sketchbook alone. 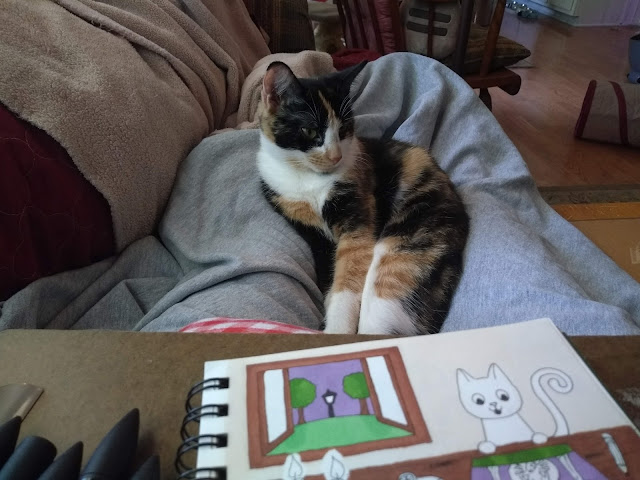 I have a desk that is supposed to be the place where I sit to draw. Said desk essentially never gets used. If I sit at said desk, I get climbed on, jumped on, and all that jazz. Some kitties in the house, such as a certain calico named Tonks, will pretty much demand I go sit on the couch instead so that they can lounge on top me. Tonks especially loves for me to stretch my legs out on the couch so that she can snuggle in between them, which is what she's doing in the photo above. It's not really very easy to doodle while sitting on a couch, and it often involves using a pillow and clipboard as a makeshift desk. In truth, though, the couch time kitty cuddles make it totally worth it.

Today's flashback doodle stems way back to November of 2016, and is an example of how my style has changed here and there over the years. 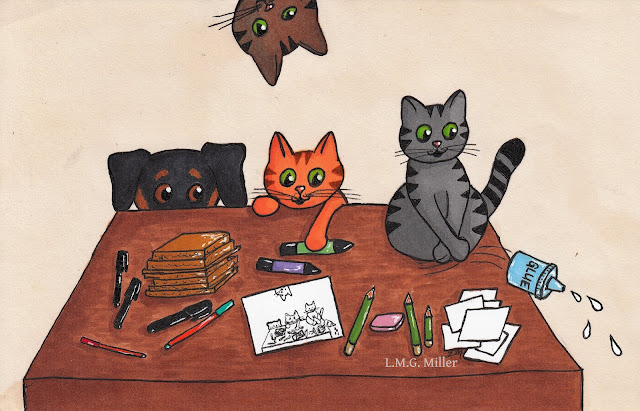 Nowadays, I'd never intentionally doodle a cat without a tail. Even cats ducked behind something, such as the table in the above doodle, or even in the case of the kitty peeking down from the top, would get a tail in my current style of doodling. It kind of drives me nuts to look at my old doodles in which cats were not always given tails. And even when a cat was given a tail in my old doodling days, it was doodled in a very different style.

***
Did you know?
Did you know that there have been multiple painters in the history of art whose paintings almost exclusively depicted cats? A couple such painters include Henriette Ronner-Knip, Louis Wain, and Theophile Steinlen. Painting isn't the only art form in which cats have been stars for centuries, though. For example, our current generation isn't the only one with folks who are obsessed with cute photos of cats. In the 1800s, a photographer named Harry Pointer snapped hundreds of photos of cats. Some of these photos include cats dressed up or posed in anthropomorphic manners. Such artists have helped the world fall and stay in love with cats for centuries.
Posted by The Menagerie Mom at 6:35 AM

May I suggest a lapdesk? Hard top, with a pillowy under; purrfect for working while held down on the couch by a kitty!

It’s never easy to work when you have a cat climbing on you, but i can’t tell my cats that, either.

Some of those cat photos with the animals in clothing are both funny and painful.

That looks so cozy! I bet you wouldn't have it any other way, either!

We are the same way too. We have a desk but never use it. We are always on the couch doing everything. Tonks looks like a great kitty to have around during doodle time. Love that photo. Thanks for sharing. Have a great one.
World of Animals

I am never alone either-it is wonderful :) I like the flashback drawing. And I did not know there were so many painters that used cat as subjects. :)

Good helping, Tonks! We like to help our mom and dad, too, when they are working at home. :) XO - Gracie and Ava

Tonks, you are a great helper! We're glad that you watch over your Mom and keep her safe.