It's time for some Friday fun! Let's start with the Friendly Fill-Ins, shall we? In case you missed them yesterday, I'll share the fill-ins statements again here. Ellen of 15andeowing came up with the first two, and I came up with the second two.


I answered these myself, and my answers are below in bold.


1. My favorite Peanuts character is Snoopy.
(If there's a furry character, they're going to be my favorite. I also love Woodstock. Though, perhaps my answer should be World War II. If you don't know what I'm talking about, you can refer to our "Did you know?" trivia at the bottom of this post.)

2. I knew I was no longer a child when I felt excitement over getting a new vacuum cleaner.
(Nothing buries your childlike lease on life more than feeling excitement at the prospect of sucking pet hair and dirt off of a rug with high-powered efficiency.)

3. I was shocked when I learned that Eddy will eat her own vomit as if it's a grand feast.
(Eddy is my only vomit-eating furbaby. She will eat the entire pile if you don't get to it in time. It's quite gruesome to witness. To clarify, though, she will only eat her own vomit. She won't touch anyone else's vomit with a ten-foot pole.)

4. I always feel frustrated when I try to eat tuna.
(Can you guess why? Because a certain calico of mine tries to take it straight out of my mouth. Tonks turns her nose up to all kinds of cat foods, but she'll never turn away an offer of tuna. And if I don't offer it to her, she'll straight up steal it from me.)


The next bit of Friday fun is none other than the Pet Photo Fails! Blog Hop, hosted by Melissa and Mudpie of Melissa's Mochas, Mysteries, & Meows. 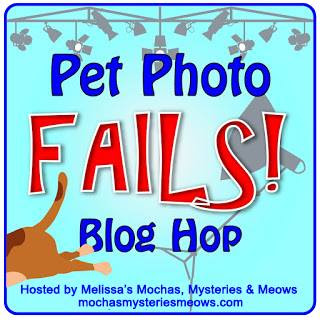 I can always count on my girl Eddy to offer up some bloopers, no matter how hard I try to get a decent shot of her. I often find myself trying to distract Eddy during photo shoots, sometimes with an open window, sometimes with the one and only type of treat she'll eat, and sometimes with both. More often than not, neither distraction does me any good. This time around, I first ended up getting a blurry shot of the top of Eddy's snacking head. 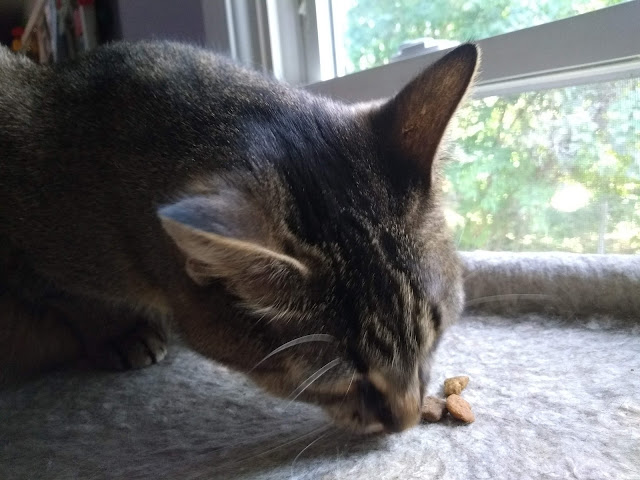 Then there was a blurry shot of the side of her snacking head. 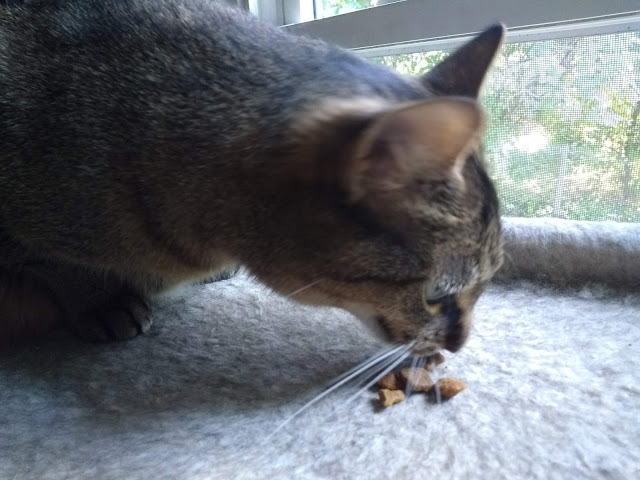 And then, well, she got a bit distracted elsewhere. 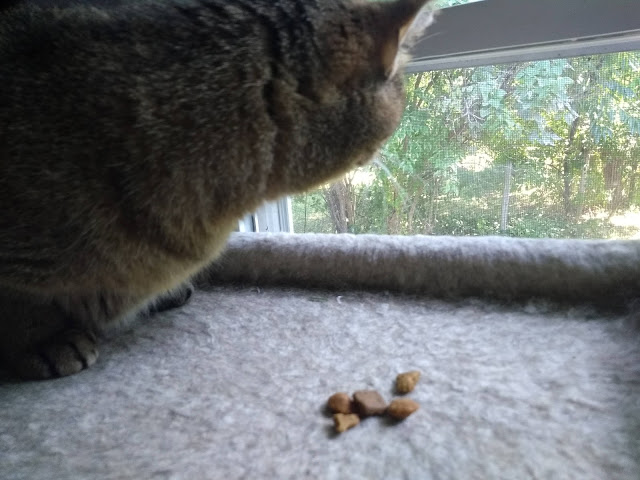 At least this failed attempt at a photo shoot gave us some usual Eddy bloopers to share. We're never wanting for those, it would seem.

Today's flashback doodle is one I first shared almost exactly a year ago to the day. It was created for a series of doodles in honor of my angels Rosie and Sammy, since this brother and sister duo would be celebrating their birthday on September 1. This flashback doodle is kicking off the memorial birthday series I'm doing for Rosie and Sammy this year. We adopted these two kitties when I was just 4 years old. Sammy, sadly, only lived to 5 years of age due to a heart condition. Rosie, as many of you know, was with me for 21 years. They were both the best of friends to me, and they always kept me company. 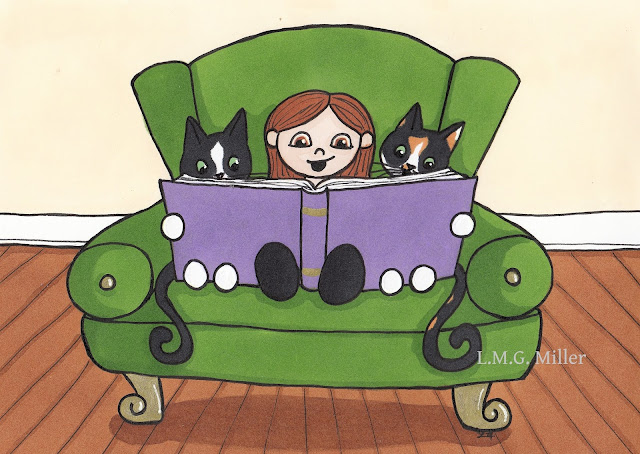 Did you know?
Did you know that an unseen cat lives next door to Charlie Brown and Snoopy in the Peanuts comics? Peanuts fans might very well know this, but for those who didn't know, it's true. The unseen neighbor cat was largely part of the storyline in the 1970s, but Charlie Brown mentioned "the cat next door" as early as 1958. Snoopy was known to send verbal taunts the cat's way, but the cat often got revenge, such as by destroying Snoopy's doghouse. In the October 20, 1976, comic strip, the cat's name was revealed to be World War II.
Posted by The Menagerie Mom at 5:24 AM

Nice fails there but alas I suspect nature was more interesting. A treat can be a fine thing, but show me a mouse or a sparrow going free and my attention goes elsewhere, Mol
Purrs
ERin

Love all your fill-ins and especially #4. Some kitties love tuna and one of yours will just steal it. That made me laugh out loud.

When Da Boyz were in our home in the beginning, they would steal our sandwiches right out of our hands, and run across the room with their stolen goods! They don't do it anymore, but I wonder if they had a hardscrabble existence in their past.

Snoopy is the best, and yes, i remember his fighting with the cat next door. Every once in a while one of the characters would con him into holding her cat while she was busy, that was funny, too.

Eddy is beautiful even when blurry.

I am joining you today and I enjoyed your answers. Such a great variety of them! Have a wonderful Labor Day weekend. HUGS

Great answers! We have a vomit eater too- Prancie, and she will eat any other kitty's too so we have to move fast to clean it up. Getting a new vacuum is exciting :)That is funny that Tonks is so into tuna. And I did not know about the cat in Peanuts, very interesting. Nice drawing and adorable Photo Fails of Eddy. Have a nice weekend! XO

Pawsome bloopers (and doodle)! Thanks so much for joining us. Last week Mudpie regurgitated some treats...and tried to eat them back up again. I was horrified! LOL

That cat next door is my fave character altho someone told me about another cat that Freda the curl haired girl had.
I thought only dogs ate cat bomit and poos.
Thanks for hosting.

Wow. I had no idea there was a cat in Peanuts. I always enjoyed when Snoopy took to the sky to battle the Red Baron :)

Eddy has made me smile :-) Perfect no? But soeone is getting a treat - which is a good thing.