We're ready for another Thursday of rhyming. Are you? After all, it's time for Angel Sammy's Thoroughly Poetic Thursday challenge.

As always, our host shared a photo prompt to help guide our poetic endeavors. This week's prompt is this magical image here:

I really enjoy images like this. That's probably the fantasy fanatic inside me. That being said, this image gave me all sorts of different fantastical vibes, but then my poem veered way off the path I originally intended for it to take. It's another weird and wacky one. It's also needlessly long, and the title sounds like that of a cheesy Hallmark movie. I'll just leave all the weirdness below as it is, though, and let you all judge it as harshly as you'd like.

Magic in the Maples

Maplewood Forest was filled with none other than maples.
Of course, magic was another one of its staples.
That was indeed the norm there, all the magical things,
Right down to the fairies and their fairy rings.
There were of course also witches and their cats,
And a gnome or two who popped up here and there for a chat.

The only catch was that this forest and its magic was invisible to mortals.
Well, that is, at least sort of.
Most humans simply couldn't see the magic,
Which really was something downright tragic.
But every once in a while a human stumbled upon Maplewood Forest,
And that's exactly what happened to young Nellie Norris.

Nellie was simply walking home from school one day,
Taking her usual path beneath the blue sky's bright sun rays.
The next time Nellie looked up, though,
She did not know where she was, no.

All around Nellie stood maple tree after maple tree.
They were beautiful, yes, but they were not usually there to see.
Nellie had simply been following her usual boring path home,
And then somehow into a mysterious forest she had roamed.

She could not deny the magical magnificence of this forest,
But there was a worrisome mother at home expecting Nellie Norris.
It was a bit alarming that Nellie now could not find her way out.
She could not unsee or escape the maples that were strewn all about.
She had heard stories of magic in mysterious maples,
And now she hoped they were graceful without being fatal.

Nellie had to admit that she was in need of help.
She felt so lost she thought she might let out a yelp.
She walked a few yards further,
Hoping beyond hope she wouldn't find anyone keen on murder.

Nellie caught sight of a quaint little cottage,
Surrounded by a fence that was just a tad bit rotted.
She passed through the white pickets of the fence,
Which led to a home that she was certain must belong to a witch.

Truly, Nellie could not help but assume a witch lived in the little house.
If she wasn't correct, then she was a mouse.
After all, the wreath on the door was none other than a pointed hat,
And on the fence outside sat a blue-eyed black cat.
That's all not to mention the cauldron sitting over a fire in the yard,
And it certainly wasn't a simple pot of lard.
A green liquid bubbled in the pewter confines,
Giving off the aroma of chocolate and plums and brine

In truth, Nellie tried the neighboring home first,
Since it looked just a tad bit less cursed.
It was a giant toadstool with a door,
Surrounded by smaller toadstools galore.
No one answered when Nellie knocked on that door, though,
So she simply had to resort to asking a witch to help her return home.

It took a great deal of courage for Nellie to finally knock knock knock.
She wasn't sure whether to feel fear or relief when she heard the door unlock.
A woman with blonde hair and a blue dress stood across from Nellie,
Holding in her hands a sandwich lathered with peanut butter and jelly.

Nellie decided she should probably just cut to the chase,
So she asked her question with a smile on her face.
"Can you please help me find my way home?
I sort of just appeared in this forest in a manner quite unknown."

The blonde witch took a bite of her sandwich as she looked Nellie up and down.
"Yes, you certainly don't seem to belong here," she said with a smile and then a frown.
"The only problem is that I can't really leave home right now.
I have a potion brewing, and if I leave it unattended my house will turn into a cow."

With another bite of her sandwich, the witch added,
"But don't go feeling upset and rattled.
Good ol' Roger can help you, Nellie Norris.
He knows all the ways out of Maplewood Forest."

Nellie was going to ask the witch how she knew her name,
But she figured any answer would just be one in the same.
So Nellie instead asked, "Who's Roger?"
"Oh," the witch said, "he's that cat over yonder.
Don't worry, he doesn't usually scratch,
And he bites even less than that."

Nellie thanked the witch and turned on her heels.
The black cat still sat on the fence and watched her with eyes of steel.
"You're Roger?" Nellie asked.
"Obviously," was how the cat answered that.
"You can help me get back home?"
"Yes. I don't know why you'd want to leave, though."

Roger the cat jumped from the fence and pawed at its slats.
Nellie had more than a few questions about this cat.
After the cat slapped at the fence with a rhythmic tune,
He said, "I expect I'll be seeing you again soon."

The fence swung open of its own accord.
Nellie wasn't sure if she was meant to wait or move forward.
Roger the cat answered her unspoken question with a sigh.
Then he said, "I thought you wanted to leave. Goodbye."

Roger pushed Nellie's legs forward with none other than his head.
With that, she was quickly and thoroughly through the opening of the fence.
She turned around to ask Roger what that was all about,
But there was no Roger, no fence, and no witch's house.

Nellie stood upon the usual path she took home.
Amongst maples she no longer did roam.
She had returned to one world from another,
And she did so just in time for supper.

Are you curious about Nellie Norris?
Do you think she ever again found herself in Maplewood Forest?
We'll give you a spoiler, if you'd like.
She did indeed return, and far more than twice. 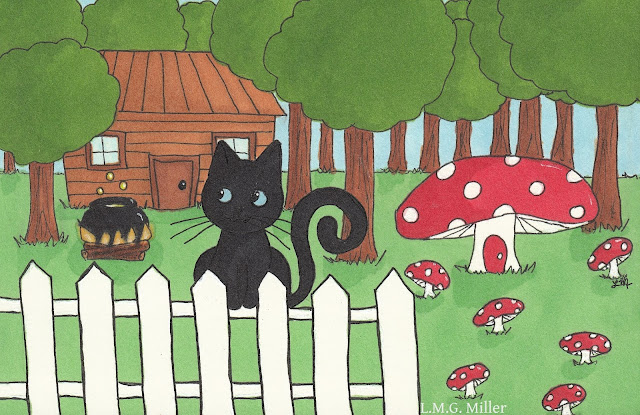 
And now it's of course time for Thimble and her Thankfuls. 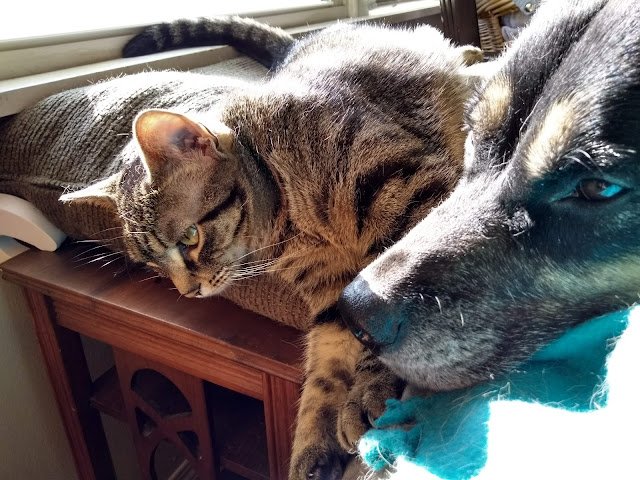 This little lady cat wanted to share yet another photo from the same photo shoot we've been sharing for the past couple of days. With this photo, Thimble wanted to show how thankful she is for her pup Astrid. At the same time, she's also thankful she is that she almost always wins the window seat when she and Astrid vie for it.

Thimble is sorry that her human couldn't manage better lighting and other photography skills for this photo. But, this is what Thimble wanted to share for Brian's Thankful Thursday Blog Hop, even though this here human made it less than an ideal shot.

And, of course, we're also thankful for all of you!

Did you know?
Did you know that studies have led scientists to conclude that, historically speaking, cats have proven to be better hunters than dogs? The studies in question looked at 2000 ancient fossils, and it was these fossils that led to the conclusion that species in the feline family have historically been better hunters and have had better survival skills than species in the dog family. How, exactly, did the fossils lead to this conclusion? In studying these fossils, researchers found that there used to be at least a couple dozen species of wild canines, whereas today there are more like 10 canine species existing in the wild. Cats were a significant reason for this decline in canine species. Researchers have gone as far as to conclude that species in the feline family led to the extinction of 40 different canine species throughout history. Members of the canine family, on the other hand, are believe to have not led to the extinction of any feline species. Historically, feline species competed for food sources with canine species, and it would seem that the feline species often won the prey in the end.
Posted by The Menagerie Mom at 7:29 AM

That really was a magical poem and we love seeing you and your woofie together sweet Thimble. Thanks for joining the Thankful Thursday Blog Hop!

I love that photo - the light just makes it more interesting. Precious Thimble and Astrid - have a wonderful day sweeties.

What a wonderful story - you captured me from the very beginning! I had this feeling you would REALLY get a lot of inspiration from this magical picture and you sure did. Thanks for playing poetry with us every week.

I'd like to see the witch's house turn into a cow!

Those two are so sweet together! That really is the perfect image for your creative mind :)

That was a fantastic poem. Your creativity amazes me. I like the drawing too. And Thimble is adorable. Very interesting hunting facts.

What a fun poem, and by the way Thimble wins the seat she wants, i believe cats do a bit better than dogs in the survival skills area over the long haul.