We've made it to Thursday. Whew. That means we've reached Thoroughly Poetic Thursday, hosted by none other than Angel Sammy.

As our always, our host shared a photo prompt to help us get poetic. This week's prompt is this entertaining image here:

Truth be told, the first thing I thought of when I saw that image was the movie Home Alone. In that movie, there's a misunderstood, lonely old man who lives next door. So, I sort of went with that thought for my insanely long poem this week.

It snowed all through the night and into the morn.
School was even canceled thanks to the blustery storm.
That fact made little Joey happier than happy,
Because it meant he could stay home with his black cat Scrappy.

By late afternoon, Joey and Scrappy had grown bored inside.
They let this be known with perfectly dramatic sighs.
Though she had discouraged it in the morn as the snow piled higher than high,
Joey's mother finally suggested Joey and Scrappy bundle up and play outside.
Neither Joey nor Scrappy argued that.
They were a snow-loving boy and his snow-loving cat.

Bundled up and ready to play,
Joey and Scrappy headed out to enjoy the snowy day.
They of course started with building a man out of snow.
When they finished, a smile lit Joey's face all aglow.
Scrappy, though, he was not happy, no.

The cat hissed at the snowman in a manner quite loud.
He then let out a much less than happy sort of meow.
Joey nodded and said, "Yeah, you're right, Scrappy.
This snowman also makes me unhappy."

So the boy and the cat set out to fix the snowy figure.
They started off by packing on more and more snow to make it bigger.
Then they grabbed some little twigs and of course gave it whiskers.
Last but not least, they turned their attention to the snowy head up top,
Onto which two pointed ears of snow they of course did plop.

"There," Joey said, a great big grin on his face.
"I think our snowkitty would easily win first place."
Scrappy the cat let out a happy mew and purrs upon purrs.
He rubbed against the snowkitty, leaving behind his black furs.

Next the boy and his cat turned to the garage,
And from it the Christmas decor they did quickly dislodge.
The festive holiday was not far off at all,
And so Joey and Scrappy began to happily deck the outdoor halls.

Then, just like that, Scrappy snapped his attention elsewhere.
The house next door was where Joey saw that his cat now stared.
Curious what his feline friend did see,
Joey turned and saw Old Man McGee.

That particular neighbor was a curmudgeon with a chronic frown on his mug.
The old man's favorite words were probably, "Bah! Humbug!"
He was also nothing if not a tad bit unorthodox,
Which was probably why he was shoveling snow in a bathrobe, slippers, and socks.

At the strange sight of Old Man McGee,
Joey shook his head and whispered, "Sheesh."
Scrappy, though, pranced over to the snow shovel by their own front door.
He then chirruped, meowed, and smacked a paw at the shovel with great force.

Joey looked at his parents' driveway and sidewalk covered in snow.
"Should I?" he asked. "I guess so."
Joey picked up the shovel and began removing the snow in front of their house.
Scrappy gave a shriek far louder than that of even the biggest mouse.
"Scrappy, what on earth was that?"
Joey covered his ears as he addressed his cat.

The cat plopped himself in front the shovel in Joey's hands.
Scrappy glanced over at Old Man McGee, and Joey did understand.
"I don't think so, Scrappy," Joey said.
"Old Man McGee is mean, and he's older than dead."

Scrappy slapped a paw at Joey's leg.
He hissed and growled at everything Joey then said,
At least until his words were, "Fine. All right. I get it."
Scrappy now purred instead of offering his boy a slap or a hit.

Hanging his head and drooping his shoulders,
Joey dragged his feet and shovel to Old Man McGee's, one house over.
The old fellow did not even notice Joey and Scrappy approach.
He was too busy shoveling the other side of the driveway in his bathrobe.

Taking the opportunity to avoid a conversation with the scary old man,
Joey began secretly shoveling the other side of the driveway where he did stand.
The boy had half the driveway and the sidewalk done before Old Man McGee turned around.
The wrinkled face then looked at him with both a scowl and a frown.

"What are you doing?" Old Man McGee snapped.
"Helping," was Joey's nervous answer to that.
Joey smiled and added, "We thought it was a good idea, me and my cat."
"I don't need help," the old fellow growled. "No, no, no."
"We thought otherwise," Joey said, "since you're out here in, well, a robe."
Night had nearly fallen, and it was growing colder than cold.
The old man in his robe really was being quite bold.

"I didn't ask for help and don't want it," the old man grumbled.
"I'm not paying you for help I didn't want," he added in a mumble.
Joey hid a frown and instead smiled and shrugged.
The old man grunted and said, "I'm going to get myself hot cocoa in a mug."
The old man turned on his slippered heels.
Then he quickly added, "I'll bring you some cocoa, if you stay here."

Joey considered running away to his home,
But he ultimately couldn't turn down a cup of hot cocoa.
Old Man McGee quite quickly returned with a tray and three mugs,
Hot cocoa in two, and warm milk for Scrappy in the third one.

Also on the tray was a plate of gingerbread cookies.
Joey thought maybe this old man wasn't really all that kooky.
After taking a gingerbread bite and smiling wider than wide,
Joey said, "These are delicious, and that's no lie!"

"I quite enjoy baking," Old Man McGee did admit.
He continued, "Making Christmas cookies is my absolute favorite.
I make dozens of cookies every single year.
I never have anyone to share them with, though, I fear."

That conversation quickly came to a very happy end.
With Old Man McGee, Joey and Scrappy's time was then quite often spent.
They soon put up the old fellow's Christmas decor,
And even built for him a snowkitty to see from his windows and door.
They also never failed to shovel Old Man McGee's snow,
And afterwards they of course always feasted on cookies and hot cocoa. 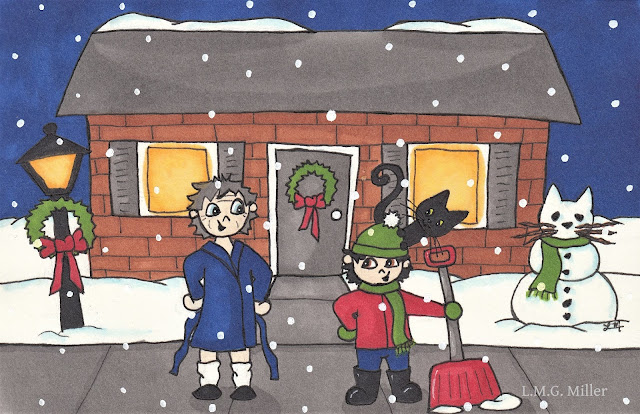 
Up next is, of course, Thimble and her Thankfuls. 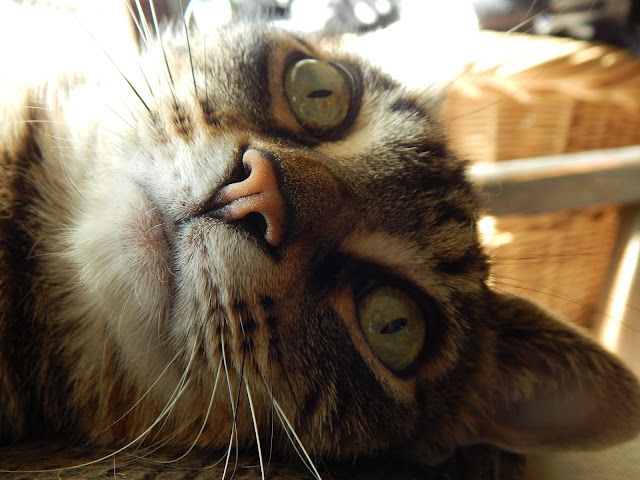 We're also, as always, so very thankful for all of you!

Continuing on with our Thanksgiving dinner tips, yet another common holiday dish is white potatoes, such as mashed potatoes. When it comes to feeding your furbaby white potatoes, those that are cooked and plain can be a reasonable treat in moderation. When additional ingredients are added, though, then you have to start being extra cautious about offering potatoes as a treat. For example, butter or sour cream might cause gastrointestinal distress, especially for cats and dogs who are lactose intolerant. In addition, as we've said before, added ingredients such as garlic, onion, or excess salt can potentially be dangerous if consumed by a kitty or pup. So, you  can let your furbaby try out those mashed potatoes, but first make be sure to take into account how they're prepared.

In addition to white potatoes, Thanksgiving is also often a popular time for sweet potato dishes. If plain and simple, sweet potatoes can make for a great treat for a kitty or pup. They are a great source of fiber and vitamin A, as well as vitamin C, potassium, and a variety of other beneficial nutrients. Plain steamed, baked, or mashed sweet potatoes would be a great treat to allow your kitty or pup during that Thanksgiving dinner. That all being said, though, do be cautious of dishes such as sweet potato casserole. These altered versions of sweet potato often contain added sugar, sugary marshmallows, and other potential seasonings or ingredients that could be unhealthy or lead to gastrointestinal side effects. So, sweet potatoes are a great treat to offer that furbaby in your life, but do be sure it's of the plain and healthy variety. Just as with white mashed potatoes, make sure you know how sweet potatoes are prepared prior to letting your furbaby have a taste.
Posted by The Menagerie Mom at 5:50 AM

Such a sweet poem! It made me very happy :)
A little kindness can go a long way!
And Thimble is certainly quite adorable indeed :)

A terrific poem/story! We've been shoveling our neighbor's walkways; she doesn't appear to be home. She lost her husband a couple of months back.
By the way, I posted about your Eastside Cats doodle today! Thanks again; I'm considering how I'm going to frame it; think it should float on a mat to leave the edges showing. Lucky for me, I used to be a framer in a previous life!

What a wonderful poem/story.....it's great to have a helpful neighbor and I think this old guy really DID appreciate the help even though he had a bit of a hard time SAYING that at first. Thanks for playing along with us every week - as you know we always look forward to your entry AND the doodles!

Love the fill-ins. Thank you for co-hosting the fun.

You do always have the best poems and Thimble is always such a cutie. Thanks for joining the Thankful Thursday Blog Hop!

That poem was darling and put me in the mood for some gingerbread and cocoa on this cold day! We are thankful for Thimble and her adorable parts too.

Beautiful Thimble! Your amazing poems play out like movies! Love them.

Home Alone is one of my favorite holiday movies. I love your poem, very sweet. Thimble is a cutie. I like the drawing and tips too. I look forward to your fill0in answers tomorrow. XO

Sometimes when you reach out, you find a friend in an unexpected place. Thimble is beautiful!