Happy Thursday! As we do every penultimate day of the workweek, we've done some rhyming for today. After all, it's time for Angel Sammy's Thoroughly Poetic Thursday challenge.

Our host always helps us out by sharing a photo prompt. This week's poetic prompt is this fun image here:

When I first saw that there image, I'll be honest and admit that the first thing that came to my mind was Bobby Pickett's song "Monster Mash". Halloween, as you probably know, was not that long ago. During that frightfully festive season, I always listen to and watch music that is all shades of spooktacular. Some of the videos that kept popping up on my Halloween playlist were Bobby Pickett's "Monster Mash" series of songs, and those wonderfully old-fashioned videos were filled with black and white scenes of monsterly dancing. I guess that's why "Monster Mash" popped up in my mind when I saw the lively image above.

Anyway, I decided to go along with that first thought that came to my mind when I saw the photo prompt for today. That being said, as much as I love me some Halloween, I didn't want to leave out the upcoming holidays from today's poem. So, I did a sort of holiday mashup and ended up with this silly little rhyme and equally strange doodle below:

Jack and Sally were the best of friends.
They spent their days together when classes did end.
When school was out for the holiday season,
The two friends sought something to give their days meaning.

Sally settled on a class she believed both Jack and herself would deem fun.
She signed them both up and in a happy circle she spun.
The two friends found themselves some fancy dancing attire.
When the night of the class arrived, they needed no reminder.

That night, Jack and Sally scurried and skipped to the studio.
How to dance was something they both longed to know.
They entered the building and felt great excitement.
That is, until the others in the dance studio came into sight.

What on earth is going on? Jack and Sally both thought.
"Welcome to the class!" someone said in a voice rumbling and soft.
Jack and Sally turned to the voice and their eyes grew wide.
The speaker purred, "I'll be your dance teacher on this very night!"

The teacher was just as confusing as the others they had seen.
Something about this whole scenario seemed a tad bit obscene.
The teacher was not only a cat, but also had a carved pumpkin for a head.
The other dancers in the class spurred equal feelings of confusion and dread.

There was a walking, talking scarecrow moseying about,
As well as a skeletal sort of man with a black suit and black hat he did tout.
Then there was the fuzzy fellow with eyes of gold and fur of green.
He sulked and frowned and honestly looked meaner than mean.
Jack and Sally could not bring themselves to approach the green man, no.
They decided they shouldn't touch him with a thirty-nine-and-a-half foot pole.

Before they could flee and run out the door,
They were shuffled to the center of that terrifying dance floor.
The moves they learned were just as strange as the rest of the situation.
There were wild and chaotic twists and rotations.
Jack and Sally were pulled this way and that,
The entire dizzying dance led by the pumpkin-headed cat.

In between two particularly nauseating moves, Jack asked,
"Sally, why on earth did you pick this crazy dance class?"
Sally yelped, shrugged, and groaned.
She said, "The details were something I did not know.
It was at a reduced price as a holiday special, this class.
I never should've signed us up for something called the Monster Mash!" 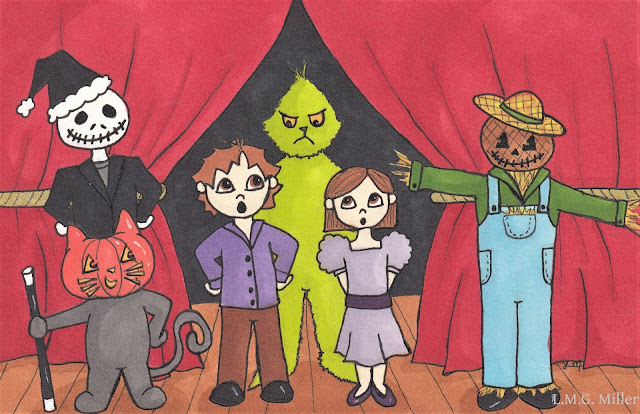 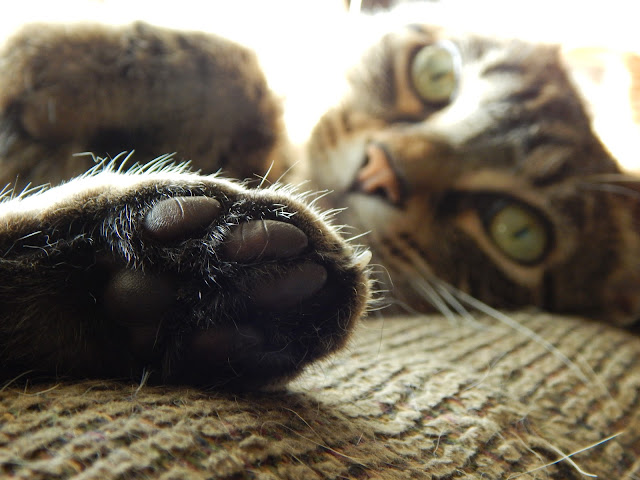 Today being Brian's Thankful Thursday Blog Hop, Thimble of course wants to express her gratitude for her adorable toesies and all they allow her to do. This mom of Thimble's is also so very thankful for toe beans like these.

We're also of course thankful for all of you! Thank you for making this blogging community the wonderful place it is!


And now we have the fill-in statements for tomorrow's Friendly Fill-Ins challenge. Ellen of 15andmeowing crafted up the first two, and I came up with the second two.

We've been discussing foods that may or may not be safe to share with your furbaby on Thanksgiving. Keep in mind, though, that food safety isn't just related to food preparation and eating. Safety precautions should continue even after you've finished your meal. What are we getting at? We're reminding you to be aware of dishes in the sink and food scraps or wrappers in the trash. Illness and emergencies can result if your furbaby licks off of plates in the sink that contain remnants of dangerous foods, or if they find their way into the trashcan where scraps or bones reside. So, be aware and take precautions to keep your pup or kitty safe from dangerous foods even after the feast is over. Immediately rinse or wash plates and keep the sink clear of dangerous food debris. Also take out the trash if it contains dangerous food items, or keep it securely hidden away from your furbaby.
Posted by The Menagerie Mom at 4:59 AM

Terrific poem and we love the Monster Mash. Hey sweet thimble, if those adorable toe beans get cold you can track down Bobby and borrow some socks. Thanks for joining the Thankful Thursday Blog Hop!

The Monster Mash! Lets go and DO IT! Dad says he loved this song and the dance and looked forward to it yearly on Halloween. Love those toesies Thimble. Purrs friends

You know I like the pumpkin-headed kitty!
And hey, monsters need to have fun too...

Look at that precious little girl! What a fun photo prompt and poem. That picture screams the 1950s and I love it...I was SO born too late. Crazy about that era.

That was a great poem. I love the drawing too- especially the Grinch :) And Thimble, you are a cutie from you toes to your nose. Excellent tips too.XO

Ah, Bobby "Boris" Pickett... It caught on in a flash. And who can forget "The Crypt-Kicker Five" who backed him up? Sort of.

I think I still have that single around somewhere... TBT

There's a Monster Mash fundraiser down here in the swamps, i understand it is a lot of fun. Although such gyrations would certainly throw my back out.

Thank you, Thimble, for the lovely pose!