Woof Woof Wednesday with a Kitty on the Side

Yesterday we shared some photos of Thimble and pup Astrid posing their toesies together. I briefly mentioned that while the photos looked like a cuddle fest, it was actually the result of the two girls battling for the favorite window seat in the house. Can you guess who usually wins this battle? 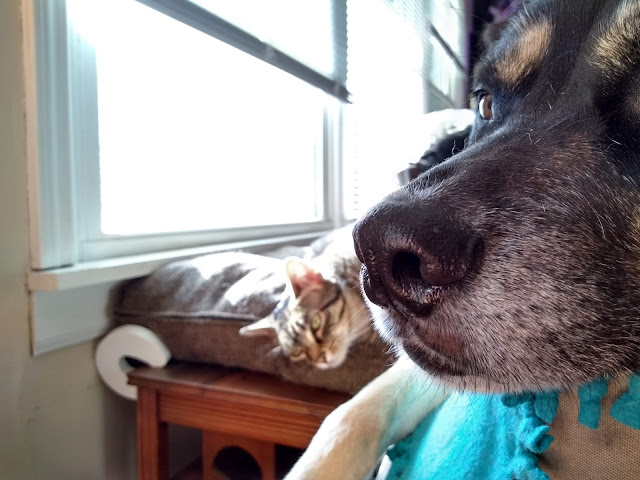 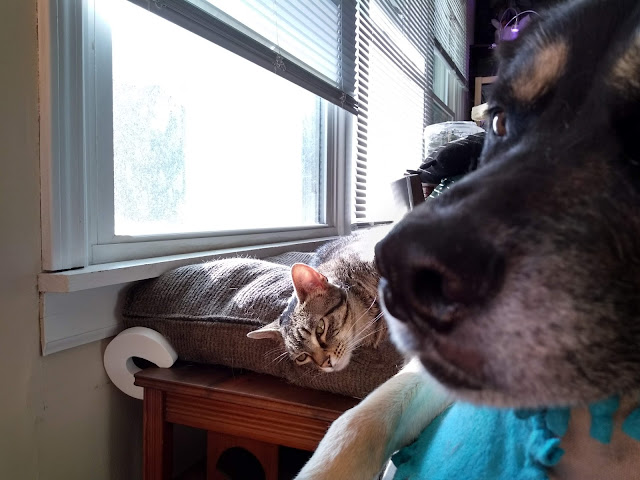 Yep. Though pup Astrid outweighs Thimble by over 60 lbs, Thimble wins the window seat probably 9 times out of 10. Don't let these girls fool you, though. There are enough windows in this house for all the furbabies to nap in, they just like to fight over this one because what's life without sibling rivalry?

P.S. In case you're not sure what sort of a furniture configuration you're seeing in the above photos, it's all simply proof that my house is decorated around the furbabies. There's a couch, which is what Astrid is lying on. Thimble is on a pillow that is on top of a small table, and that table has a white foam buffer on it, because Astrid is known to slide tables into walls. Can you believe that Astrid was once so eager to get in the window seat that she literally punched a hole in the wall getting up there? So, we use foam and other protectors when and where we can, for the safe of both the furbabies and the house itself.

I'm trying not to turn my inner Halloween eagerness into blatant Halloween doodles just yet, but a lot of good I'm doing with that. Today's doodle was inspired by none other than a Halloween decoration I recently saw at a Michaels craft store. This decoration involves a fake typewriter with a skeleton hand posed on top of it, as if typing a frightful tale. I pretty just drew my rendition of the decoration, but of course added a kitty and a pup to the mix for good measure. 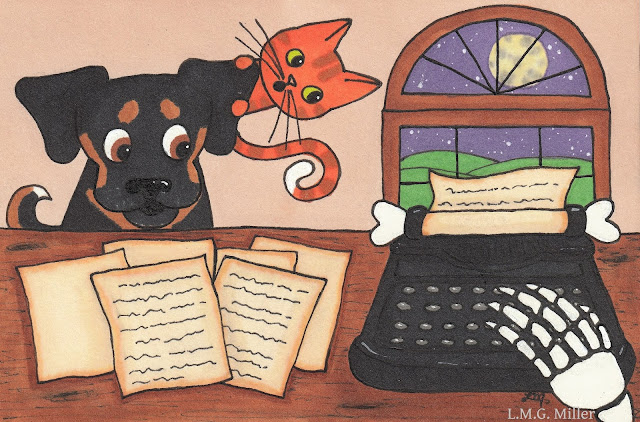 ***
Did you know?
Did you know that dogs are long distance runners while cats are sprinters? This most especially refers to the way dogs and cats catch their prey. Especially when considering dogs and cats in the wild, they catch prey in relatively different manners. Dogs are primarily landbound and are more disposed to running long distances to chase and catch prey. When it comes to cats, on the other hand, they can more easily climb and jump, and they therefore often hide and catch prey by surprise. When cats need to run after prey, they are more so sprinters than long distance runners, unlike dogs. Both dogs and cats are considered predatory species, but when you think about it, their predatory ways are not necessarily the same.
Posted by The Menagerie Mom at 1:47 AM

Of course the kitty wins! ;)

Yes, our home too is set up for maximum cat enjoyment, while human needs run second in that race!

If a house is not set up for the children, fur or human, it's just not a home!

Cats ALWAYS win!!! And I actually have that typewriter with the skeleton hand on it!

Astrid is such a sweetie to let Thimble bully her :) I love the drawing- very creative typewriter. XO

Astrid, you sure are a nice woofie to let Thimble have some window time. <3