Today's selfie is a flashback one, but a fun one. 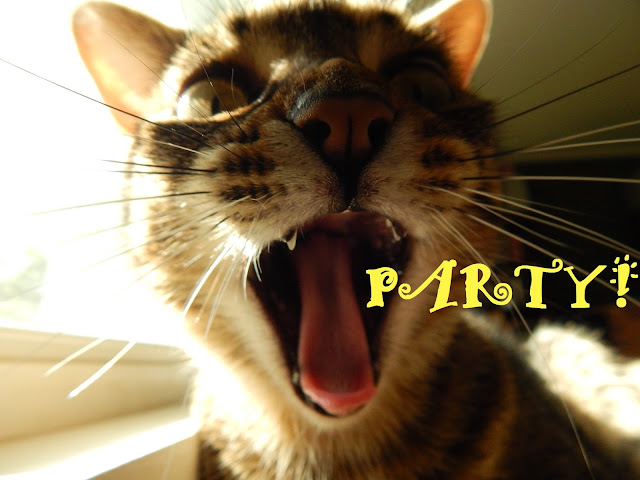 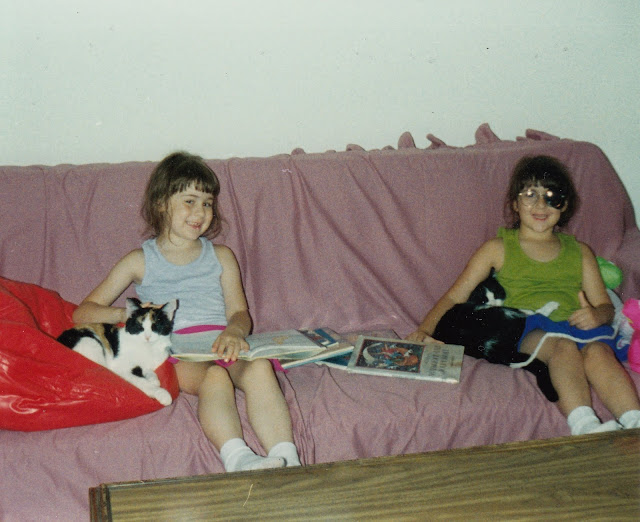 That there is a photo from the olden days. On the left is Rosie sitting with my sister, and on the right is Sammy sitting with me. I am indeed wearing an eye patch, in case you had or hadnd't noticed, thanks to a childhood eye condition. I remember feeling insecure about that eye patch, but I never minded wearing it around Rosie and Sammy, because they never judged.

My angels Rosie and Sammy were born on September 1, 1993. My family adopted them when I was just 4 years old. Sammy only lived to 5 years of age, sadly, due to an undetected heart condition. Rosie, however, lived to the wonderful age of 21.

Though I wish my angels Rosie and Sammy could have lived forever and that they were still here with me, I won't feel sad today. I'll feel happy that these two angels filled my childhood, and my adulthood, with more joy than I can ever begin to express.

Happy birthday, my sweet angels! I love you forever! 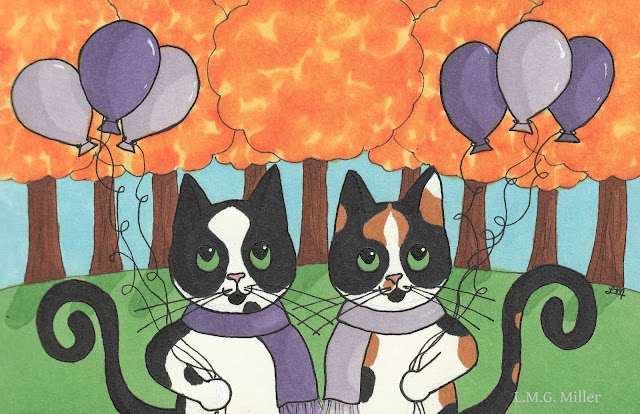 In case you were wondering, we do know for a fact that Rosie and Sammy's birthday was September 1. That's not a guess, but an actual known birth date. I always loved that that was their birthday. Autumn is my favorite season, I start celebrating it on September 1. Rosie and Sammy have always been my autumn angels.

***
Did you know?
Did you know that the oldest recorded age for a cat is 38? A cat named Creme Puff was born on August 3, 1967, and she lived until August 6, 2005. Her owner was Jake Perry, who had another cat named Granpa. Granpa was said to  have been born in 1964 and to have passed away in 1998 at the age of 34. It has been pondered whether the diet of Perry's cats had anything to do with their longevity, as it is said he fed them turkey bacon, eggs, asparagus, broccoli, and even coffee with heavy cream.
Posted by The Menagerie Mom at 6:50 AM

This is such a sweet post and doodle, and such a wonderful way to celebrate Angel Rosie and Sammy's birthday! Happy birthday to them both. <3

What a happy party face Thimble! Love the doodle and the sweet memories - Happy Birthday!

A lovely Birthday Memory selfie of two darling felines. Times may move on, and we grow, but our love never diminishes.
Purrs
ERin

Happy Birthday to Angels Sammy and Rosie!
I wore a patch as a kid too, so I know how you felt!

Happy Birthday at the Bridge, Sammy and Rosie!

You have posted a couple of childhood pics before, i remember you talking about how much the cats meant to you in part because they didn't care about your eye condition. They were beautiful and i'm so glad you had them in your life.

Happy birthday at the Bridge to your precious angel babies!

Happy Birthday in Heaven sweet Angels Rosie and Sammy. Thanks for sharing their past photos. Having the cats in your life was sure a blessing. Purrz from the Katie Katz

That is such a sweet photo of you and your sister. Happy Birthday in Heaven to your 2 angels. Cute drawing too. I always ask people what they feed their cats when I hear of them living to a ripe old age.

What a lovely picture. Such smiles and lovely cats too.