In the United States, today is Labor Day. As the name suggests, this is a day to honor the labor force. It is a public holiday, which means this here human is happily enjoying a day off of work. Mancat Evan is just as happy that I'm home, because he's my shadow and my buddy and will be spending his day more or less attached to my hip. I don't mind that one bit. Let's face it, for the most part, Evan and I will be vegging out on the couch, enjoying cuddles and window whiffies. 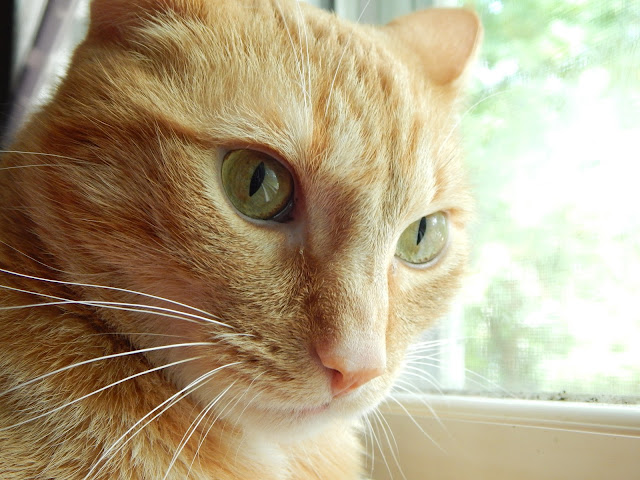 To all of our US friends, we're wishing you a relaxing Labor Day! To all of our friends outside of the US, we hope your Monday is magnificent!

We're still sharing doodles from our series in honor of my angels Rosie and Sammy, since their birthday was yesterday. Of course, these doodles are inspired by these two angels as well as the wonderful season of autumn. 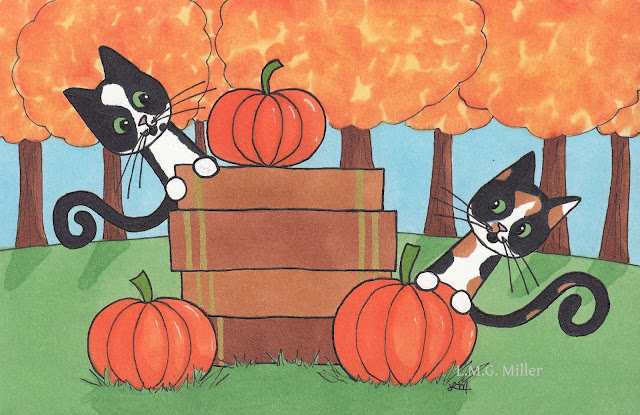 ***
Did you know?
Did you know that more than one cat in history has served as a town's mayor? For roughly 20 years, from 1997 to 2017, a cat named Stubbs served as mayor of Talkeetna, Alaska. He was first elected as a write-in in 1997, and maintained his mayoral position after multiple uncontested elections. Omena, Michigan is another town with a furry mayor. For the past decade, Omena and its roughly 280-person population has had an animal serving as mayor. The most recent election had all animal candidates, including 2 cats, 13 dogs, a goat, a chicken, and a peacock. The winner and therefore new mayor was calico cat Sweet Tart. Do you think these towns are onto something?
Posted by The Menagerie Mom at 1:39 AM

We'll be doing much the same today. Happy Labor Day!

Enjoy your holiday Evan! You sure look handsome today. I've been to Talkeetna Alaska, a darling town that was the inspiration for that quirky t.v. series 'Northern Exposure' - I'm not at all surprised they had a cat for a mayor for 20 years.

Evan is a cutie. Glad he gets to enjoy you all day. Great drawing. And I think every town needs a cat mayor.

Happy Labor Day, and I'm off to find out where Omena, Michigan is...I'll go there and visit the mayor!

We're staying home today and hubby is going to BBQ baby back ribs for dinner. Outside of that we're going to rest and enjoy the day.

Have a fabulous Labor Day. Scritches to the furbabies. ♥

Have fun with Evan. Nothing like lazing with a kitty on a quiet day

We are all laboring at relaxing today.

Hope you are having a fabulous, restful time! And yes, i wish i lived in a town so forward thinking as to have a cat mayor.

Happy No Labor Day! Take it easy (but take it)!