On Sunday, I shared some photos of my parents' cat Foggy. Those photos were from a visit I paid to my parents' house last week. On that same day, I arrived at their house to find quite a sight. 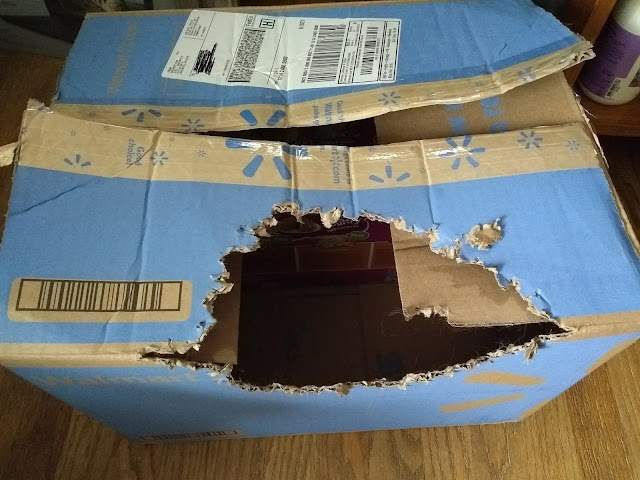 Good grief, did a shark attack that box? Oh, my bad. Nope. It was just one of their cats. 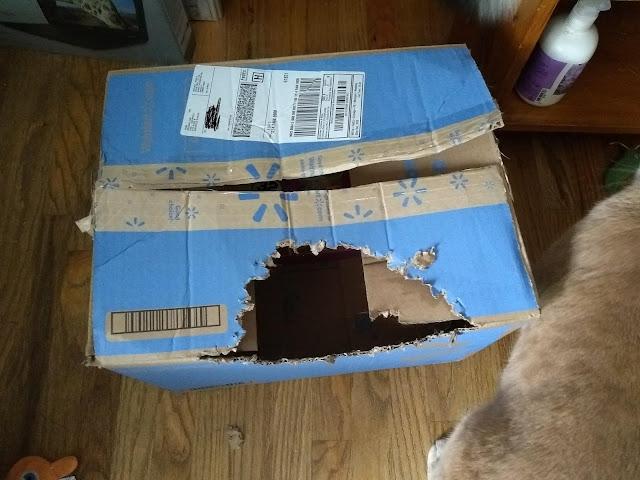 My parents have a cat who likes to tear up cardboard with his teeth whenever and wherever he can find it. He has never been found to have anything amiss going on to cause this, but instead he just really seems to enjoy throwing shreds of cardboard everywhere. He doesn't even eat it, he just finds joy in destroying boxes and covering the house in cardboard shreds. 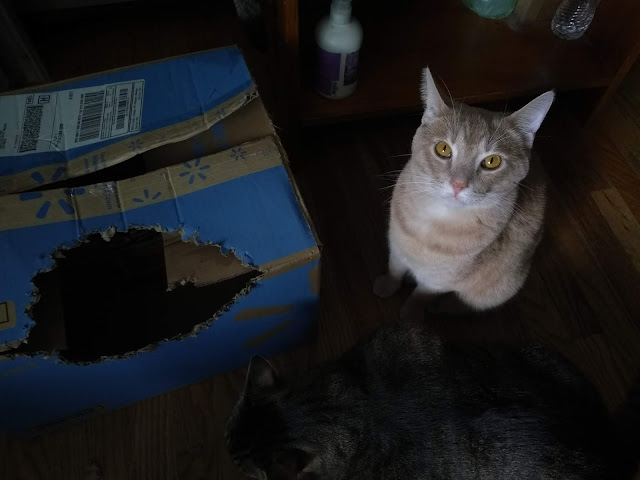 Do you see the culprit coming out of the shadows in that poorly lit photo? That's Kipper. He loves him some cardboard. He's also a really sweet and social cat, but definitely don't try to pick him up, because he is really not into being held. Things get ugly if you try to hold this boy. 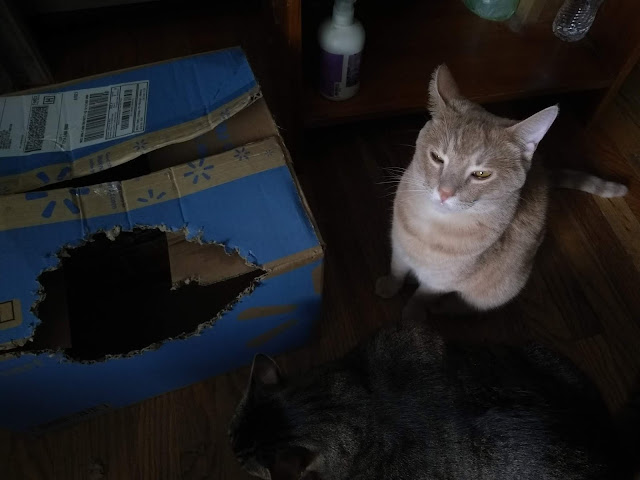 I asked Kipper if he ever feels remorse for his treatment of innocent cardboard boxes. 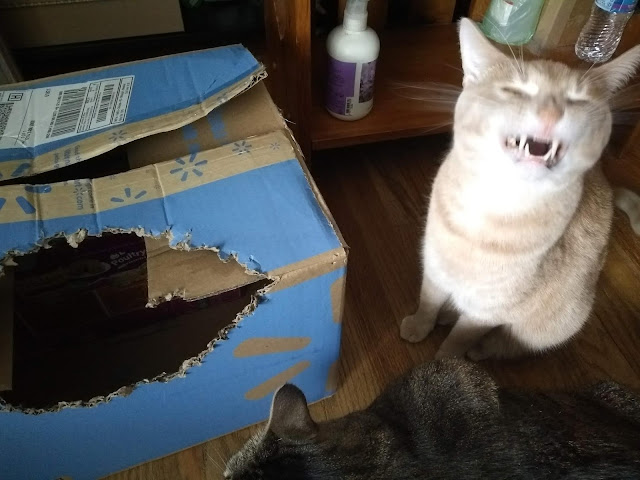 Nope. Apparently this boy has no regrets. Fair enough.

For Kipper's safety, my parents don't leave many cardboard boxes out and about in the house. What a strange thought. They have 12 cats, but cardboard boxes are scarcely found. If you do find a box, it usually looks like a shark took a bite out of it, and you'll find shreds of cardboard anywhere and everywhere throughout the house. That's how Kipper rolls.

Today's flashback doodle is actually the image I scribbled up last September to use as last year's autumn banner for our blog. It's almost time to put up this year's autumn blog header! 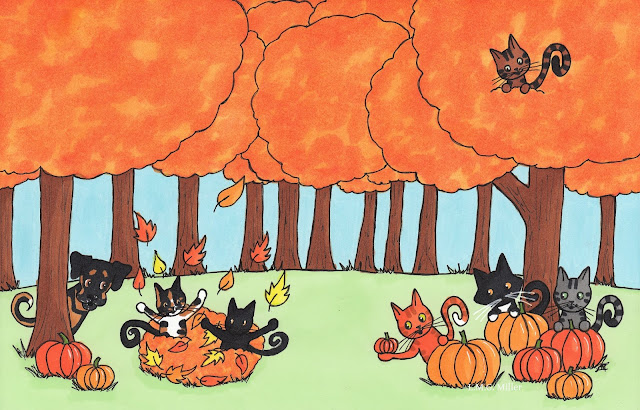 That doodle was scribbled up just a couple months after newbies Tonks and Winky entered the family. Everyone was still trying to sort out the new norm after new girls' arrival, and still no one was really quite sure of the young kittens who seemed to never sleep. Eddy despised the kittens then just as much as she despises them now, which is why I decided to draw her nestled up in a tree in this doodle. After all, that's the kind of distance Eddy likes to put between herself and those pesky newbie cats even to this day.


***
Did you know?
Did you know that the term pica refers to the act of chewing or eating nonfood items that provide no nutritional value? Cats and dogs can exhibit pica for a variety of reasons, some simple and some serious. For example, some furbabies will find and eat items throughout the house out of boredom or when anxious. Some kitties and pup might even have a simple predisposition or quirk that prompts them to seek out nonfood snacks for no apparent reason.

In some cases, though, pica can be the result of something more serious. Certain nutrient deficiencies or diseases, for example, might prompt a cat or dog to attempt to eat items that are not in fact food. There have been veterinary cases of cats who ate litter and were thereafter found to be anemic, and treating the anemia resolved the litter-eating habits. Showing an interest in eating cardboard, grass, rocks, and a variety of other items can potentially be a sign of deficiency in fiber, vitamins, minerals, or other various nutrients. In other cases, cats or dogs with diseases such as diabetes or brain tumors have presented with pica. The important thing is to always be aware of what your kitty or pup is eating, to keep unsafe items out of the reach especially of animals who are known to eat nonfood items, and to seek veterinary care for pica as needed, so that you can work to keep your kitty or pup safe and healthy as best as you can.
Posted by The Menagerie Mom at 5:08 AM

Oh, that's hilarious! That poor box looks like it did suffer so. I've heard my dad lament how I'm not much of a "holder" either. He wonders about my upbringing and how my previous slaves treated me. Apparently his old pal Orbit loved to be held and carried around. Oh well, not me. And that's that.

Some of the cats here like to chew on cardboard too but have never chewed a hole in something. You all have a really good day.

Looks like Kipper was doing some remodeling on that box...make that demolitioning!

We give the cats lots of cardboard boxes, and just clean up the detritus! Especially the cardboard scratcher, that seems to have chunks sliced out often. Thankfully, I have a never-ending supply of cardboard from my office, so once a box is destroyed enough, we recycle it and put out a new one.

Kipper might just be one of those cats that sees a cardboard box as prey and wants to tear it apart. A friend of mine has a cat who does that with paper bags, and my friend says the cat is "defeathering the bird."

It's obvious that Kipper loves a cardboard challenge!

What a cutie pie!!! No one would know he's so destructive, MOL!

Lexy used to do that all the time! For some reason she stopped.

Kipper is a cutie. He is clearly an artist sculpturing the boxes. I love the drawing. And I have heard of pica, but luckily none of my cats have experienced it.

Dang! Kipper busted up that box something fierce!

Ellie all of a sudden started chewing boxes maybe 9 months ago. She checked out okay too. For her, I think it's behavioral. She seems to do it more when she wants attention and can't get it. And attention she gets because it cracks me up. Though I don't enjoy picking up the pieces of cardboard she spits out all over the place.

Well he's too cute to get mad at for the box-shredding but funny how some cats (and dogs) just can't resist cardboard!!