You're about to see a handsome orange tabby. 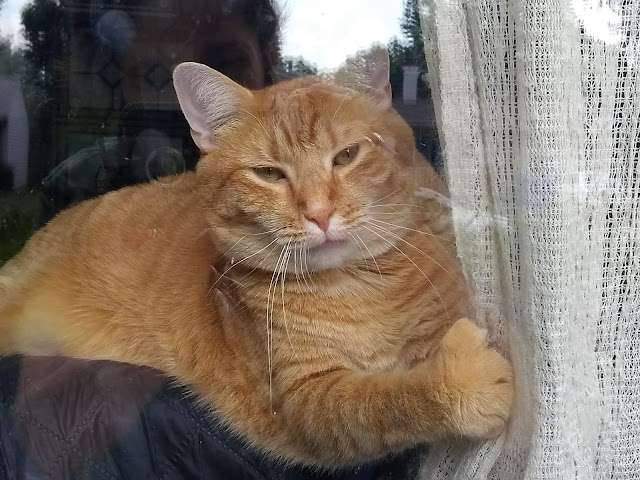 But, wait, that's not Evan! 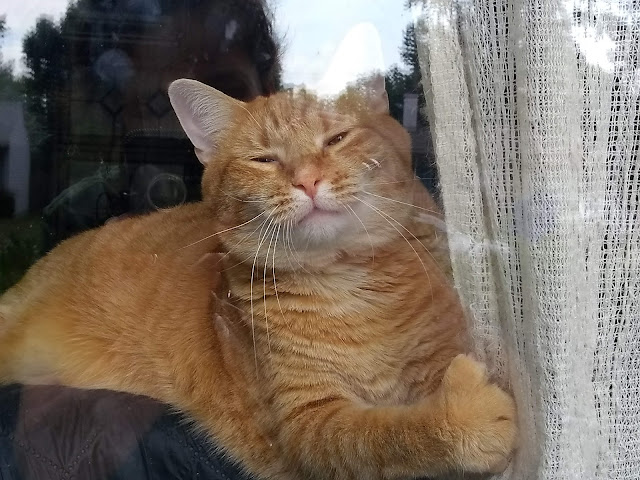 That there is my parents' cat Foggy. He always welcomes me and bids me farewell from my parents' front window when I come and go from their house. I apologize for the quality of these photos, because they were indeed snapped from outside the window, on the other side of which Foggy was bidding me farewell after a visit. 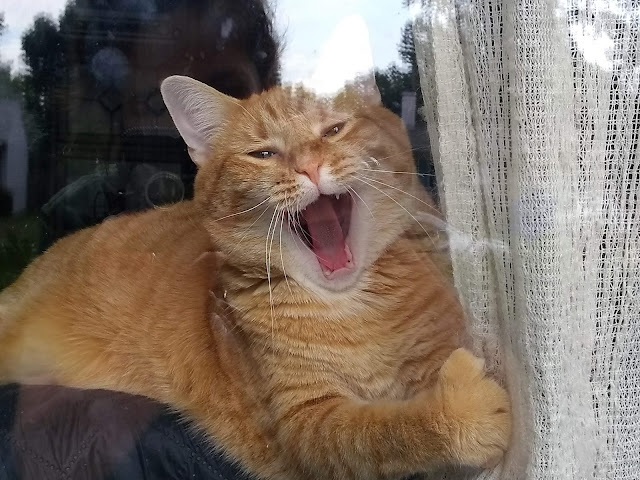 I tend to get attached to each and every cat I meet in my life. That being said, Foggy is one of those cats with whom I have somewhat of an extra special bond. I'm actually the one who found Foggy. On a dark and stormy evening in October of 2016, I was at my parents' house and heard what sounded like a cat crying outside the front door. I opened the door, expecting to see the neighbor cat asking for his usual treats. Instead, I saw a fuzzy orange rump scurrying beneath my mom's van. Long story short, after a small game of cat-and-mouse with the scared little fella, I caught the little guy you see in the photos above, who at the time was only about 5 months old.

My mom and I fruitlessly searched for an owner. We assume he had one, because from day one he's been incredibly friendly and affectionate. After checking for a microchip that didn't exist and posting about him online as well as around the neighborhood and at local veterinary clinics, no one came forward. Perhaps he was set loose or dumped, which is just as well, because by that point my dad had fallen in love with the orange boy and claimed him as his own. If my dad hadn't formed an immediate bond with Foggy, I'd have another orange tabby. My dad especially fell for this boy because he reminded him of his childhood orange tabby named Gus. Foggy loves his dad very, very much, so I know he's in the right home.

Want something a little extra fun? As I've mentioned before, I back up all of my photos to Google Drive, and Google often creates fun little somethings for me using my photos. Google yet again created a bit of an animation for me, this time using the above photos. See?

And don't worry, Foggy's claw is not stuck in the curtain in those images. He is notorious for reaching out and grabbing the curtain, but he's never gotten stuck. In fact, he's quite proficient at moving the curtain aside if he thinks he doesn't have a good enough view out the window.

Foggy and all of us are wishing you a happy Sunday! Of course, Foggy's also entering his handsome self in the Sunday Selfies Blog Hop, hosted by the Kitties Blue of The Cat on My Head.

It's all about the orange tabbies today. And pumpkins, of course. 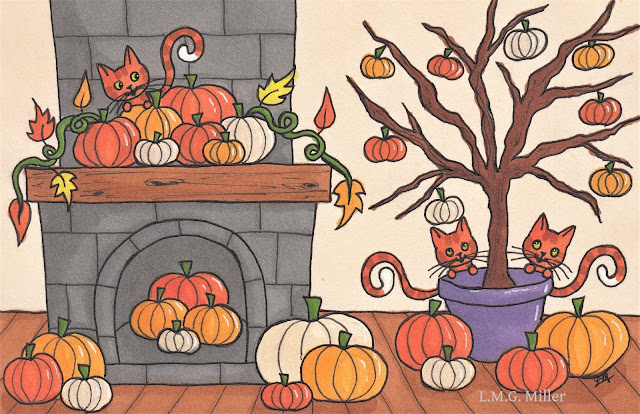 Foggy sure is one handsome dude. Love the selfie effect, and a great rescue story with such a happy gingery ending for one and all.
Purrs
ERin

The pictures need no excuse. They show a fine cat and a ginger ninja!

Foggy is one gorgeous hunk of ginger mancat! Love the animation by the way, and the artwork is, as always funtastic.

Foggy is handsome as only ginger cats know how to be!

Foggy is so handsome! What a great way to be greeted!

Foggy is such a handsome mancat ! Purrs

What a beautiful Foggy! He looks like he is full of personality, what a precious boy.

Aww, we love Foggy! We loved hearing his rescue story, and about your special bond with him. Thank you and your Mom for saving him! XO

Foggy is one good looking fellow.

You have a Halloween Tree!

Oh Foggy, you are one handsome boy. We do love orange kitty kats Great pictures. Have a great day.

Foggy is one great kitty !

I just love this orange boy just from your description of his and his adorable photos. I love his name too, Foggy! I would end up calling him Fogsy lol. I love all the illustrations!
Have a great week xx

Foggy is a cutie. I love gingers. Very cute drawing too. I need to get more of my kitties microchipped.

We love orange tabbies. I am one after all. We tend to talk a good bit and it seems so does Foggy. Good to meet you

Since we never intend to move again, I won't worry about updating the kitties chip info, and you know what? I have The PO'M and Sweetie chipped too! Although they stay close to home, one never knows, and let's face it...they belong to us!

He is gorgeous and the animation made us smile!

Such a sweetie💗Pawkisses for a Happy Day🐾😽💞