Evan is taking a page out of pup Astrid's book. He found out she likes to pose in the window for an unreasonably large number of photos, and so now he decided he's going to make you all see him in the window for roughly a gazillion photos in a row. So, here's a selfie of Evan yet again posing in his favorite window. 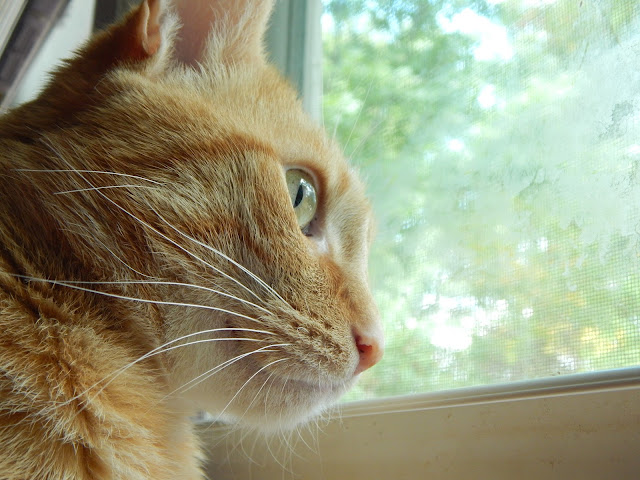 In yesterday's doodle, angel Rosie was hanging out with some pumpkins, and she appeared to have some plans. Want to see what she had up her furry sleeve? 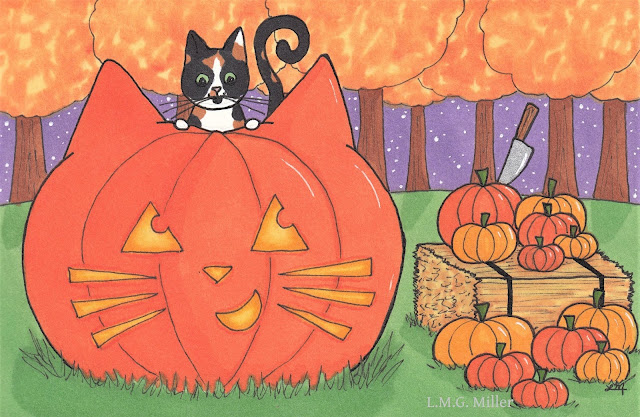 ***
Did you know?
Did you know that big cats can't purr? Lions, tigers, and essentially every big cat except for the cheetah are incapable of purring. It is believed that when small cats purr, the larynx vibrates, which causes the hyoid bones in the neck to vibrate, and purring results. In big cats such as lions and tigers, though, tough cartilage runs up the hyoid bones, preventing purring. That being said, this aspect of big cat anatomy is also why they have the ability to roar.
Posted by The Menagerie Mom at 12:00 AM

As long as there's something fun to watch out a window - why move? Right?

We bet there's something really interesting out there, right, Evan?

Evan! We bet there's awesome stuff to see outside that window, so we can understand why you've decided to stay put. :)

We love what Rosie did with that pumpkin! :)

Can never have too much of Evan, or a good window view come to think of it, MOL. Maybe both of you can do a shared window shot next week?
Purrs
ERin

Evan, just do what you want to do!
I love cat-eared pumpkins!

What do you see out there handsome boy? Too bad that big cats can't purr, I bet it would have been like a Ferrari engine!

We always love seeing you in your window, Evan!

Evan brightens up the window just like Astrid does.

Such an interesting fact that big cats cannot purr. The doodle is totally adorable, and Evan is super handsome in his photo. Thanks for hopping with us. XOCK, angel Lily Olivia, Mauricio, Misty May, Giulietta, angel Fiona, Astrid, Lisbeth, Calista Jo, Cooper Murphy and Sawyer

Evan is such a gorgeous cat I love the portrait.