It's Thursday! That means you guys get to sit through one of my ridiculously long and loony rhymes again! It is, after all, the day of Angel Sammy's Thoroughly Poetic Thursday challenge.

Our host never leaves us stranded, but instead every week provides us with a photo prompt. This week's prompt is this interesting image here:

I won't lie, this image made me feel a little anxious. I find the thought of hitchhiking a tad bit scary for everyone involved. Perhaps that's why it took me a long time to brainstorm how to make a poem out of this, especially one without a storyline fit for a horror movie. The result was this here:

The Adventure to Autumn

Fiona had somewhere to be,
But she was faced with an obstacle unforeseen.
Her car chugged and left her stranded on the road.
The engine sounded like it might explode.

Fiona grabbed her bags and traveled by foot.
After all, her car had just completely gone kaput.
She still had a few hundred miles to go,
And she wondered if anyone would help make her travels less slow.

As she walked down the road with her bags over her shoulders,
Fiona admired the distant canyons and their impressive boulders.
She quite enjoyed this sort of scenery,
But she nonetheless still had somewhere else to be.

She walked and held her thumb out toward the road.
Fiona wished for a ride, but not to encroach.
After an hour, one car finally slowed upon approach.
It was an old blue car as hefty as a boat.

Behind the wheel sat a smiling old man.
He said, "I'd like to help you, if I can."
"Why, thank you," Fiona said. "I'm heading all the way east.
Is there a chance you're headed that way, please?"

The old man's smile widened and he waved her inside.
He said, "I'm headed east, if you're in need of a ride."
Fiona nodded and took a moment to think.
She indeed knew stranger danger was a real thing.
At the same time, she really did have somewhere to be.
She hopped in the car and took a seat.

The old man's car radio was playing jazz,
Which he turned down after a bit of time passed.
"If you don't mind my asking," he said, "what in the east do you seek?"
"Autumn," Fiona replied. "Autumn is in the east."

The old man looked out the window as he drove.
He asked, "Isn't that autumn right out there, though?"
Trees with orange leaves stood here, there, and everywhere.
Autumn filled every bit of the land and air.

Fiona nodded, smiled, and admired the sight.
She said, "Autumn out east, though, is completely different all right."
The old man shrugged and nodded at the same time.
"I guess I can't argue that," was his reply.

The drive continued for hours and more hours on end.
Fiona worried a trip this long wasn't what the old man did intend.
When Fiona spoke up and said this concern aloud,
The old man shushed her and said he was happy to drive beneath any clouds.

They drove through autumn in a great many village and town.
Fiona didn't think it was possible to look at such a sight with a frown.
She smiled the wider and wider as they neared her destination.
The old man asked her for the exact location.

She gave him the address and he drove the final mile.
The sight of the building brought forth Fiona's biggest smile.
It was built of red brick with a sign that made the sight even better.
On that sign above the door read the words, ANIMAL SHELTER.

"Thank you for the ride, good sir!" Fiona declared.
She flew from the car and into the autumn air.
"Will you be needing a ride back west?" the old man asked.
"I'll indeed be headed back that way next."

Fiona was really quite glad to hear him speak those words.
At present, she had no other way to head back homeward.
With but a few more words the old man happily said he'd be waiting outside.
Fiona was beyond grateful to know she'd still have a ride.

She ran to the brick building and did what she came east to do.
She was happier than happy, let us tell you.
Back outside, indeed the old man waited in his car.
It would seem he truly didn't mind a journey that far.

Fiona skipped to the car on two happy feet.
She peered in the window and said, "I have someone for you to meet."
In her arms she lifted a cat with fur of brown and black.
The old man smiled and laughed, "Would you look at that!"
"This is Autumn," Fiona said. "She's my new cat." 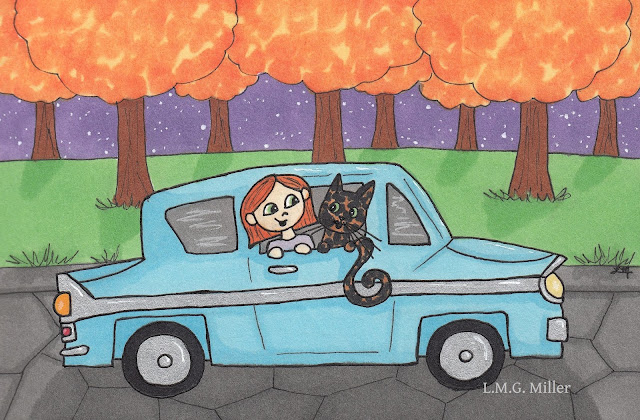 
It's now, of course, time for Thimble and her Thankfuls. Thimble had to think on what she was going to share for Brian's Thankful Thursday Blog Hop today. She finally decided, though, and can you guess what she settled on? 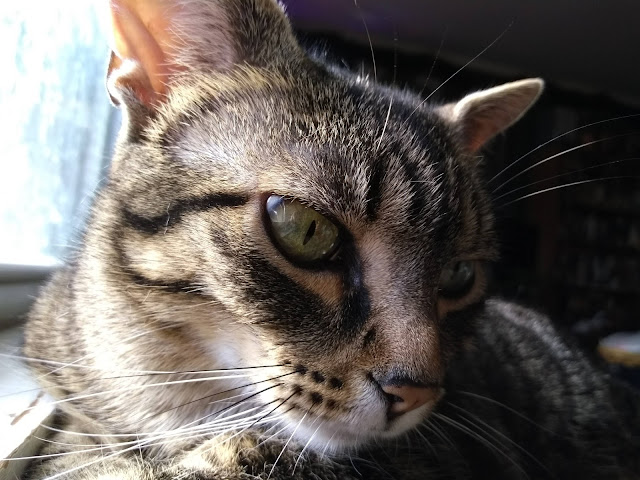 Those whiskers! Those big ears and eyes and nose aren't too bad either. But, today it's all about the whiskers. 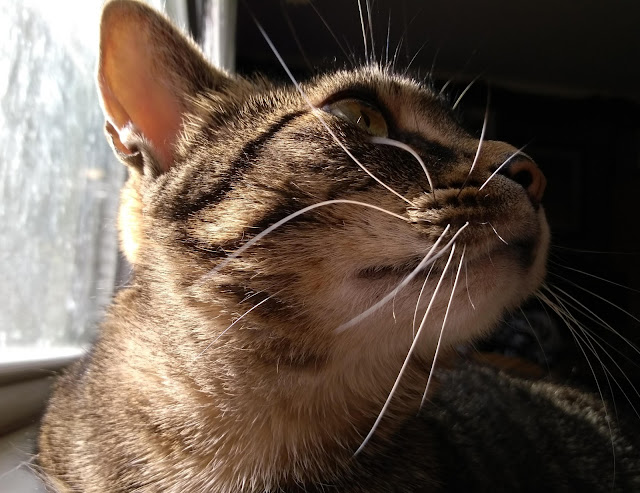 Without those whiskers, Thimble would feel lost. Many cats would feel lost without their whiskers. They're just such handy things to have attached to your face!

It's not just whiskers we're grateful for today, though. We're also so thankful for all of you!

We of course now have for you the fill-in statements for tomorrow's Friendly Fill-Ins challenge. Ellen of 15andmeowing is the mastermind behind the first two, and I came up with the second two.

Did you know?
Did you know that the whiskers of a cat, or other mammal, are also known as vibrissae? In Latin, vibrissae most literally translates to "nostril hairs". A cat's whiskers are, after all, much like the hairs you find in human nostrils. That fact aside, though, vibrissae also stems from the Latin word vibrare, which essentially means "to vibrate". This also makes sense, since a cat's whiskers send vibrations to the nerve endings in their follicles when they touch something. Hopefully you were looking for a Latin lesson today, because that's what we had to offer.
Posted by The Menagerie Mom at 12:03 AM

I'd be lost without my whiskers too!

What a great poem - I knew this photo would be a challenge but you got there with no problem (!!). Always a pleasure to "see" what you "see" in the photos.........love your Thimble closeups today too!

Perfect Thimble. You should write a book of those poems/stories. Wow.

You are beautiful and have great whiskers! Mom used to have a kitty that looked a lot like you.

Those are blue ribbon whiskers Thimble! Have a wonderful day cutie.

Your poem was totally amazing and so are your beautiful whiskers sweet Thimble. Thanks for joining the Thankful Thursday Blog Hop!

That is one terrific poem. We love your whiskers, Thimble. You all have a super day.

Thimble we love those whiskers and ears too. Great poem and goodness that was serendipitous

Such a great poem and those whiskers are adorable!

Oh! Your story/poem but a lump in my throat! HOW WONDERFUL!

Love the poem. You do these so very well.

I'm all ready for Friendly Fill-ins. Thanks for co-hosting the fun.

Have a wonderful Thankful Thursday. ♥

An adventure worth taking, i'm glad she found her Autumn.

Whiskers are so important, it always makes me concerned when i see kittens that are barbering each other.

You have beautiful whiskers, Thimble!

Oh I just love how you turned this into an autumnal tortie post!

Excellent poem! This is one of my favorites. Very clever twist with the word autumn. The ride reminds me of the 6 hour drive my mom and I took to adopt KaTwo in NJ at a shelter. Nice drawing too. And that is a fine set of whiskers on Thimble. I look forward to your fill-in answers. XO

Great answers too. I am sorry I didn't ask more about my parents' lives too.

Thanks for sharing and hosting.

Beautiful doodles! The warm colors are soothing too.