Happy Thursday! Shall we kick off the day with Angel Sammy's Thoroughly Poetic Thursday challenge?

As always, our host shared a photo prompt to guide as a we rhyme. The prompt for this week is this interesting one here:

As a kid, I watched the 1994 The Little Rascals movie more times than I can count. The movie involves the rascally children partaking in a go-kart race. The little vehicle in the image above very vaguely reminded me of their go-kart, so I sort of started with that thought and went from there.

Little and the Rascals

Little Billy was the son of Big Billy,
But that was a mouthful and sounded quite silly.
That's why their names simply became Little and Big,
To make things much easier and far more quick.

Little was only that by name.
Though just a boy, daring was his claim to fame.
There was not a single challenge Little did not accept.
He never wanted to seem a failure or inept.

Little's next big challenge was inching closer day by day.
It involved an event with pumpkins, apple cider, and hay,
This event being the local fall festival on an approaching October day.
The fall festival would of course include its annual race,
With go-karts trying to reach the fastest pace,
And a giant trophy for the one who sped to first place.

Little would of course be partaking in this autumn derby.
He planned to win that trophy, and in a hurry.
Luckily, Little was not a team of his own.
He had two good friends waiting for him at home.

In case you weren't aware, Little's best friends were furry and feline.
They were also loyal and smart and would help Little in no time.
Little's friends had names just as confusing as the very boy and his dad,
Because the name game really can get that bad.

Both of Little's feline friends had the name of Rascal,
And yes, that really was sometimes quite a hassle.
It didn't help that the cats were also identical.
They were oft called Rascal One and Rascal Two.
The Rascals was the collective name for the friends who mewed.

The fall festival was rapidly closing in.
Little was certain losing the go-kart race would be a sin.
He worked on his race car day and night,
Of course with the Rascals right there by his side.
Soon enough, Little believed his go-kart was perfect,
It was the Rascals who gave it that one final check.

Finally, the day of the fall festival arrived.
To it, Little gave his go-kart a drive.
The Rascals had seats of their own in the car,
And they seemed content to ride along no matter how far.

Little was ready at the start line long before the race began.
He wasn't about to be a tardy racing man.
The other racers now took their places as well,
And Little geared himself up to start the race out out swell.

Truth be told, Little was perhaps a tad bit cutthroat,
Though you might cringe to hear that unfortunate note.
Little even thought he'd trained the Rascals to do what needed done,
To do what was needed to ensure that they won.

When the race began, Little put the pedal to the metal,
All while checking to see anything that might knock him down a level.
When he saw a thing or two that caused him concern,
To his furry race friends he immediately did turn.

Little never thought the Rascals would disobey, not ever.
He didn't think twice about asking them to hop out and see to the competitors.
He told Rascal One that young Rudy's car needed its brake line severed.
And loosening speeding Ollie's wheels was Rascal Two's instructed endeavor.

Did the Rascals obey Little, though?
They most certainly did not, no.
Rather, they purred and purred and yet again purred,
While quite clearly enjoying the wind in their fur

In the end, the race was thrilling and a close one at that.
Little came in second, which to him was dead last.
His shoulders fell and he frowned as he sighed,
Though he dared not lot any tears fall from his eyes.

Little wondered if the Rascals were upset by the loss,
Though perhaps they would have won if they had let him be boss.
When he turned and caught sight of his two furry friends,
There was a shift in his mood and mind right there and then.

They had not won the race as Little had wished,
But the Rascals tails still happily swished.
They pranced this way and that with their heads held high,
And even offered glad tidings to the driver of the winning ride.

Little watched as the Rascals did all those happy things.
To them, not coming in first was not even remotely a sting.
Little wondered if the Rascals knew more than him about winning.
Little thought that perhaps a trophy meant nothing.
Perhaps the joy of it all was what really meant something. 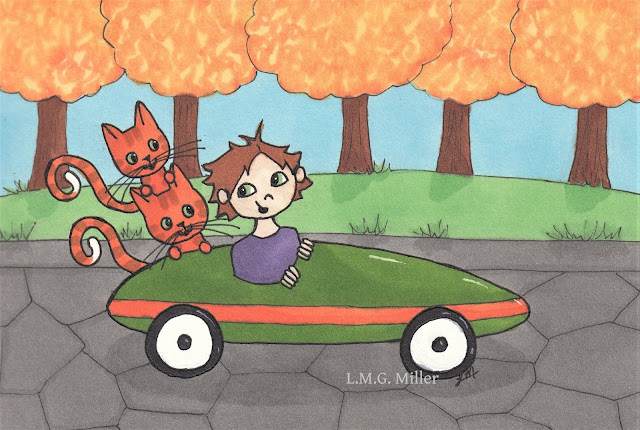 
Now, what does Thimble have to share today for Brian's Thankful Thursday Blog Hop? 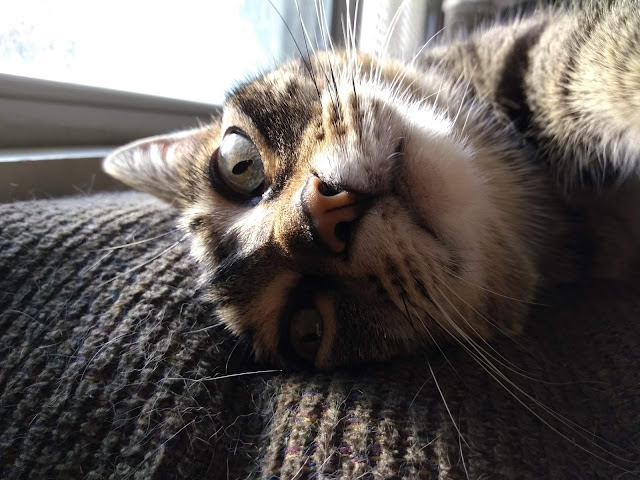 Thimble is so very grateful for all the sunshine we've been having lately. It may be 90°F outside, but Thimble is enjoying that sun from her favorite air conditioned window seat. 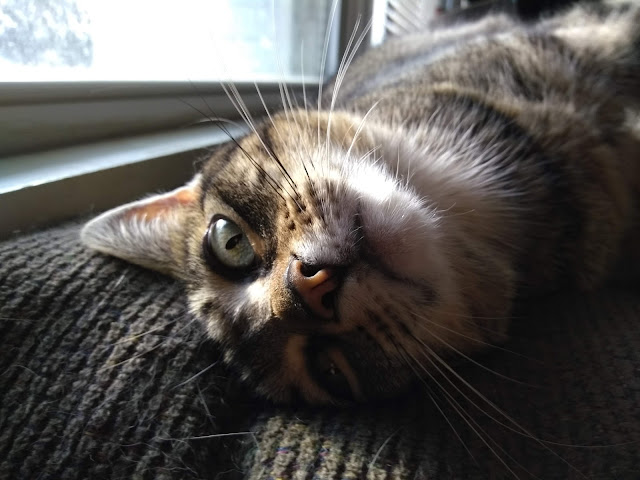 We're of course also so very thankful for this wonderful blogging community!

My Friendly Fill-Ins challenge co-host, Ellen of 15andmeowing, is taking a break from blogging to spend time with her dear cat Noel, whose health is declining. Please keep Noel and Ellen in your purrs, thoughts, and prayers.

***
Did you know?
Did you know that observations in the wild have concluded that a cheetah can go from 0 mph to 60 mph in just 3 seconds? Cheetahs are said to be capable of reaching speeds up to 75 mph, albeit in short bursts. We've mentioned in a previous post that a house cat can reach speeds up to approximately 30 mph. That is more similar to the speed of a tiger, which is said to be able to reach maximum speeds of 30 or 40 mph. Lions, as another example, can reach speeds up to roughly 50 mph. Do you think you could beat a cat in a race?
Posted by The Menagerie Mom at 12:00 AM

I think every kitty loves a good sun puddle. We have lots of rain this week, so our kitties are being deprived of sunshine.

What a happy baby! Enjoy your sunpuddlin' today sweet Thimble.

Love your poems. You're a wordsmith extraordinaire.

Sun puddles and kitties and pups just go together.

I'm all ready for the Friendly Fill-ins. Thanks for hosting this week.

That was such a fun poem and Thimble, you're totally adorable girl! Thanks for joining the Thankful Thursday Blog Hop!

I have yet to attend a soapbox derby, even though one is held in my city every year! One depends on gravity, and car design, to make it first down the hill.

Thimbles sunny photos are so cute - obviously she's loving that sunshine! As for your poem this week - it's terrific - I remember that go-kart from Little Rascals and remember my own brother making one that looked a lot like this Velomobile from our prompt photo this week. It looks like it might be fun but I have to wonder about aerodynamics and just how much more WORK it is to pedal this thing than a regular bike?!?! Thanks for "playing poetry" with us every week.....

What a funny tiny car, and what a wonderful poem ! You look so happy, Thimble, enjoy your sunpuddle ! Purrs

Thimble, i'm thankful for you and for your mother's fun poems!

Great poem! And I love the drawing to go with it. Thimble is always adorable. Thank you for coming up with 4 statements and hosting along- great job! They look like fun ones. XO

You're one of the most creative people I've ever known! We're thankful for all these sunny days too, not so much the hot temps that returned yesterday!