Happy first day of autumn! I think I'd feel a tad bit more festive if it wasn't still over 80°F. Apparently I need to get used to it, though, because the temperature isn't supposed to dip below 80°F for at least another week here in our corner of the world. Come on, Mother Nature, show a little mercy. 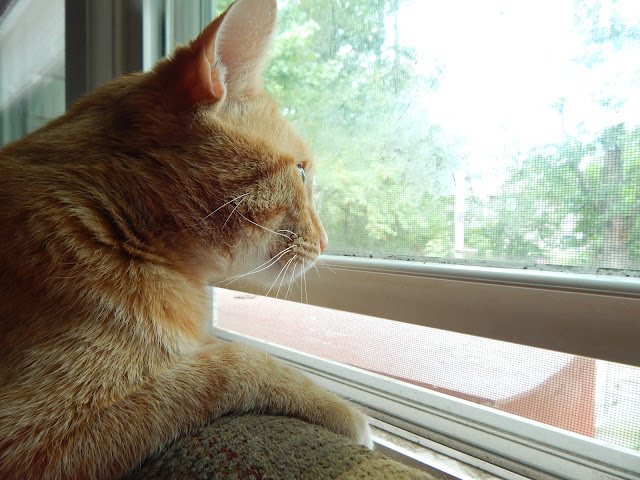 Evan is curious, though, if you all see the same issue he does here? Evan is not impressed with how much, or more like how little, his mom here opened the window. Talk about stingy. 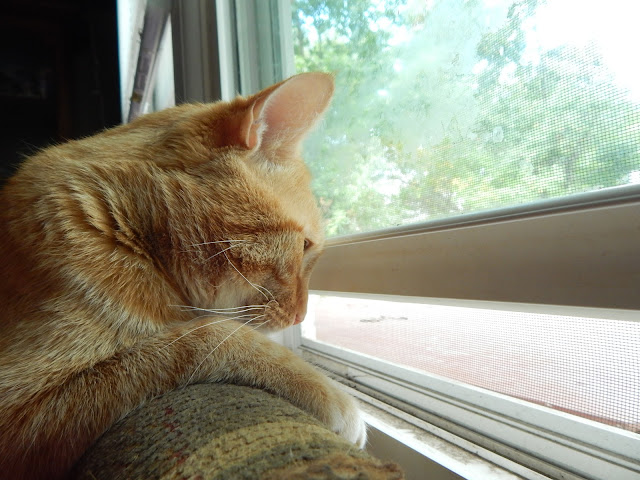 This human here gets nervous opening the window any more than that. One main reason is because a certain skinny little calico named Tonks can fit in the window if it's open farther than that, and I don't trust her to not push her way through the screen. Sorry, Tonks. And sorry, Evan.

Has autumn arrived for any of you? Are you enjoy some autumn window whiffies? We sure hope you are!


***
Doodle of the Day: Flashback Monday

I don't usually share a flashback doodle on Mondays. I usually do that on Tuesday and Friday. Honestly, though, my weekend went a bit haywire and I didn't yet get the final touches put on my doodles for this week. So, it's a flashback doodle today, and then new doodles over the next couple of days.

That being said, today's flashback doodle was originally scribbled up last September. As you'll see, it involves a scarecrow. Truth be told, I have mixed feelings about scarecrows. I've always liked the concept of them, but a lot of scarecrow decor out there kind of freaks me out. Perhaps for the same reason that I'm not a fan of clowns or most dolls, scarecrows with certain types of faces just don't do it for me. Ultimately, I've decided that I primarily prefer scarecrows with a quirky sort of twist on them. This flashback doodle from last year is an example of a type of twist I enjoy in a scarecrow. 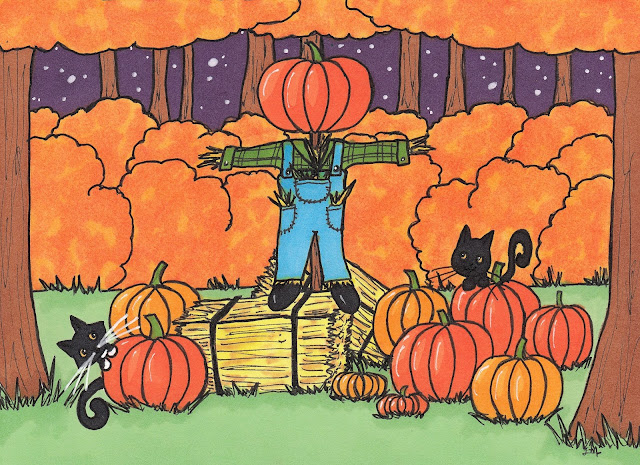 I love pumpkins, so obviously a scarecrow with a pumpkin for a head is the way to go. Of course, adding some black cats to the mix makes things even better.

***
Did you know?
Did you know that you can purchase window screen repair tape? I've mentioned this in the past on more than one occasion. We're referring to a kind of tape that is manufactured out of a material much like window screen. This is a topic we thought worth discussing because of how much cats enjoy watching out windows, but also because their claws sometimes simply don't mix well with window screen material. If your window screen does become torn, perhaps by something such as cat claws, maybe try patching it up with window screen repair tape. Of course, always test to ensure that the tape is holding the screen as is necessary, especially if a furbaby is going to be enjoying the window. Also, though, be careful that your furbaby does not eat the tape, as some cats are drawn to adhesive material.
Posted by The Menagerie Mom at 12:44 AM

I'm also too worried to open the window any more than a smidge. We live on the second floor and we can't risk one of our babies trying a daredevil jumping stunt.

I wouldn't trust Teddy at a window open any more than you keep yours open - he would muscle his way right on through. He gets to go out for walks on harness/leash so that seems to satisfy his "need" to be out thankfully. No sign of Fall here yet really other than some leaves changing - it's still HOT and we really need some rain so we'll have a "pretty" Fall. So far no sign of that!

Still in the 90's here - hoping for autumn to arrive soon! Our windows are opened no more than yours, gotta keep the babies safe. I love these Evan whiffles, he is such a cutie.

Evan is a cutie. We had a taste of fall and today it is so humid that we have the central air on. I love all your drawings, especially all the fall ones. I knew about the tape. And last year we learned how to completely replace the screen , all you need is so little tool that pushes it in.

We have a bit cooler temps now, but the sun is still hot as blazes...and I'm wearing all black today! I never really liked scarecrows either, but this doodle is fab.

Our fall looks like a nice warm Summer. Evan, you're so cute, enjoy your window whiffies ! Purrs

We had the hots all weekend but fall brought us some cooler weather today.

My Angel Tara pushed through the screen once! I'm extra careful now and it's super duper reinforced.

Windows are fun but a great temptation. It won't be autumn here for a bit of a while.

The weather is playing games with us. It hasn't rained in 7 weeks. But the temperature goes up and down. It was 90F today. Usually we have had lots of rain, the grass is green and the mousies are out in the daytime. Not this time.

We would be glad to accept a week of HOTS if it meant it also rained. Normally, we dont like rain all that much, but everything is so crunchy outside. We dont like crunchy grass and leaves unner our paws...