Caturday Art in the Kitschy Kitchen

This summer, I created a series of doodles that, at least in my head, were set in various rooms of a quaint and quirky little house. In my mind, this house was the kind of place where a nice witch might live with her family of cats. Makes perfect sense, right? Anyway, I decided to recreate some of these doodles, but this time with the quaint little home's rooms decorated for autumn. In other words, there are pumpkins everywhere. See? 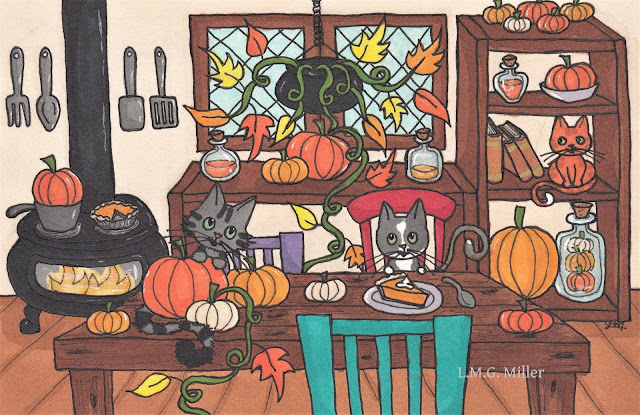 That is one busy doodle, isn't it? Can you even tell what's going on in that room? Probably not, because I can't even tell what's going on. Truth be told, I spent far longer on this doodle than I have on most of the other entries in my sketchbook. When I add that many little bits and bobs and pumpkin craziness to a doodle, it takes a relative eternity to color it all in. I enjoyed it, though, because creating anything related to autumn, and of course cats, always makes me happy.

That hectic pumpkin doodle up there is our contribution to Athena's Caturday Art Blog Hop.


***
Did you know?
Did you know that famed scientist and engineer Nikola Tesla had a childhood cat who helped spark his fascination with the concept of electricity? It is said that Tesla once wrote of how he petted his childhood cat, Macak, on a cold, dry winter day. When he petted his cat on that particular day, there was a resulting static shock that greatly intrigued young Tesla. At the time, Tesla did not know what had caused the spark of light and crackling jolt that occurred when his hand touched his cat, but he was determined to find out. It was his father who who told him that such a thing seemed like electricity, equating it to a storm hitting trees. It's been said that from that day on, thanks to his cat Macak, Nikola Tesla became invested in learning more about electricity.
Posted by The Menagerie Mom at 5:55 AM

Very interesting fact about Tesla. And I love your art with the touch of turquoise on the chair. :)

Awesome art! I love the colors.

I always wonder how cats feel about those sparks! I certainly hope they don't hurt!

Tesla was amazing, i'm glad he had a cat that pointed him in a good direction.

We always look forward to your doodles!

That cozy little kitchen looks like heaven on earth to me!

Lots of pumpkins and pumpkin pie. That would make a pawsome coloring book page. Did you ever think of making and selliung one?

We always love your artwork, and this one is right up there among our faves for sure. Busy or simple, it's amazing how talented you are!

Lovely art ! We always love to see all the details in your doodles. Purrs

Great doodle. Love looking at it and find all the different items in it. You all have a terrific Sunday.