I'm not sure anyone enjoys a good sun puddle more than Evan. 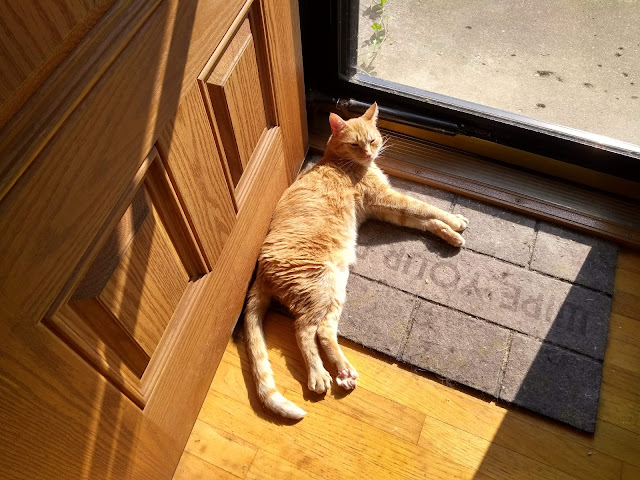 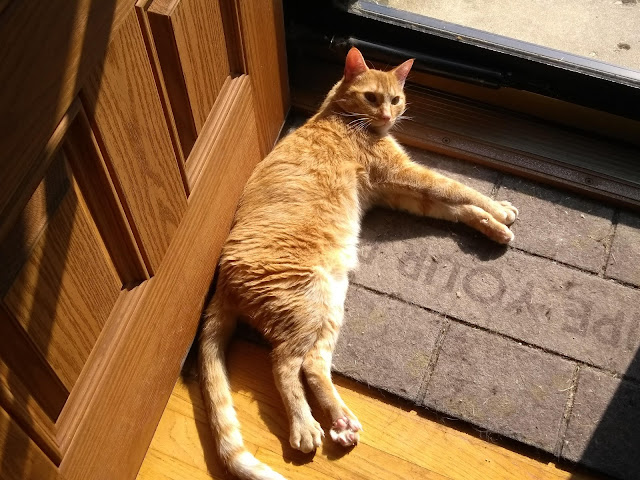 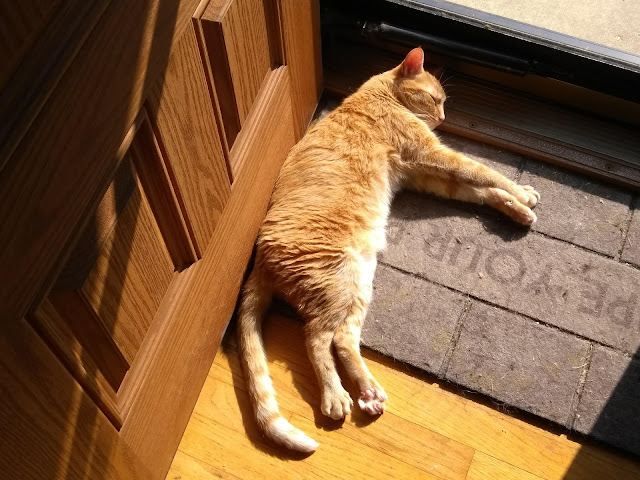 Evan apologizes if he seems less than loquacious and sociable right now. He's a bit busy, you know, basking in the sun.

Wishing you all a Monday as sunny as Evan's! 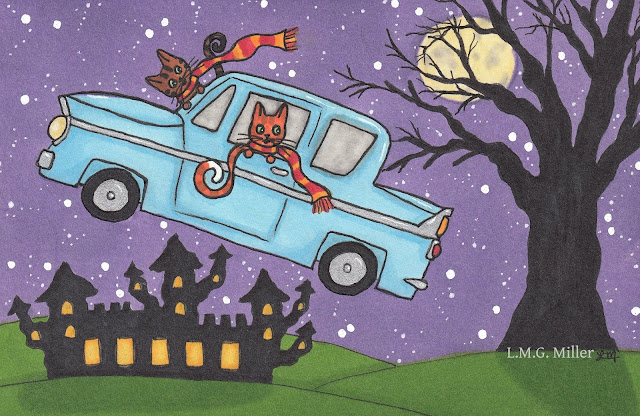 That there doodle is one of the last couple in my current series inspired by the weird, wacky, whimsical world of Harry Potter. If you're in need of an explanation for this weird doodle, it's based on a scene in Harry Potter. In this scene, Harry Potter and his friend Ron make the poor decision to take a flying car to their magical school. Ultimately, their drive in the sky is brought to a rough end by a moody willow tree. Makes perfect sense, right?

***
Did you know?
Did you know that your dog or cat can be belted in for safe travels in the car? When it comes to what the market has to offer, there are far more options when it comes to seat belts for dogs when compared to cats. For dogs, for example, various companies have manufactured seat belts in the form of safety harnesses that secure the dog into their seat. There are also simple yet beneficial dog seat belts that click into the car's belt at one end and snap onto the dog's collar on the other end. Those are just a couple of examples, and research can reveal a variety of other options.

When it comes to cats, though the options might seem more limited, it is still very possible to secure your kitty into their seat. First, for cats and even small dogs, it is best to keep them in a carrier and to secure the carrier in place in the car. There are some options on the market for this, such as straps that extend around carriers and snap into place. You can also secure the carrier in place without the use of straps you buy, though. One simple way is to wrap the seat belt around the carrier and snap it into place. If possible, you can also pull the seat belt through the handle of the carrier and then snap it into place. You can even use bungee cords to secure a carrier in the car, as long as you can find a safe place for the cords attach to the interior of the car in a way that they won't snap out of place and cause harm. You buckle yourself into the car, right? Do the same for your furbabies!
Posted by The Menagerie Mom at 5:56 AM

We've been closing the blinds around here, 'cause the sun is too hot! Hopefully, the temps will go down soon. When I drove Da Boyz home after adopting them, one of them broke out of their box and I had a free-roaming cat in the car, while I was doing 70 mph on the freeway. Thank goodness said kitty just sat in my lap, but I was a wreck until I could take an exit and pull into a parking lot. Was it Manny? Gosh, funny...I don't remember! Using a long handled window scraper, I put it through the handles of the cardboard box, thereby locking escape cat in.

Enjoy the sun handsome Evan! You look so happy and content - someone is well taken care of I think!

Evan is so adorable. I like the drawing too. I always seat belt the carrier in the car. :)

Evan, i don’t blame you for being quiet, sunbeams are for basking, not chatting.