Evan recruited the help of his mom here to snap his selfies this week. After all, the resident orange boy was super busy snoopervising the neighbors out the back door, so why not put his mom to good use while he kept an eye on the neighborhood? 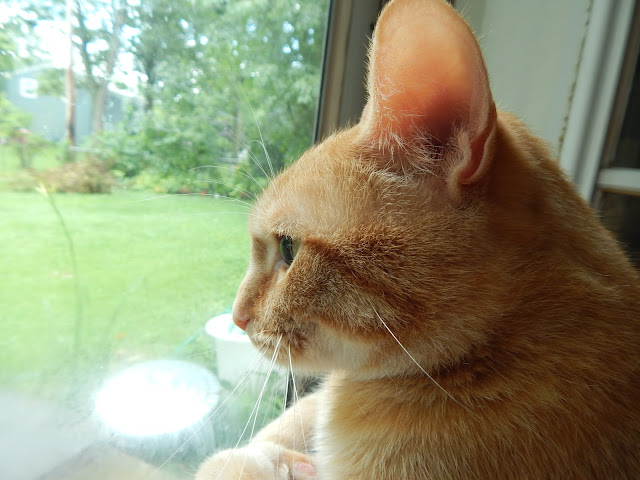 Evan quickly came to regret allowing this mom lady here to help with his selfies, though. You see, not only did he soon find his ear cut slightly off in the above photo, but in the next one pretty much his entire ear was cut off. Not to mention, his paws also wanted to be in the selfie, but his mom's camera skills cut them right on out too. 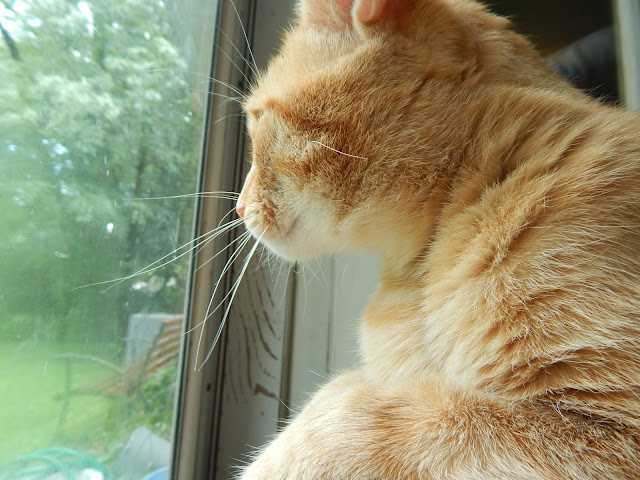 Evan hopes all of you kitty friends of his have a way better photography assistant than him. You just can't find good help these days, can you?

***
Doodle of the Day: Flashback Sunday 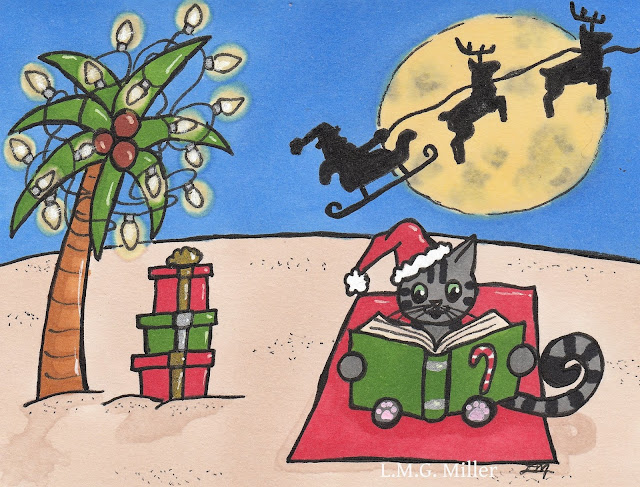 If I'm being honest, doodling up beach scenes like the one above is not one of my most favorite ways to pass my daily art time. I'm simply not a beach sort of person. I'm not too keen on sand, or salt water, or bodies of water in general, or just plain beaches. I'm thinking that's one reason why this year's Christmas in July doodles are in a completely different style than last year's. That, and I didn't want to just recreate all of last July's festive fun. There are still elements of Christmas in this year's summer festivities, and there still are elements of warm weather such as that common to July, but so far it doesn't look like there will be any new Christmas in July beach scenes this time around. I think you'll see what I mean when I share tomorrow's festive summer doodle.


***
Did you know?
Did you know that Japan has more than one island known for its cat residents? One Japanese island is even known as "Cat Island", with the official name of Aoshima. This island is inhabited by roughly a dozen humans but at least 120 cats. The residents of the human sort feed and generally care for the cats. Another cat island in Japan is called Toshiro-jima, and it contains roughly 100 human residents but over 100 cat residents. Again, the human residents of course feed the kitties. It is also reported that Toshiro-jima does not allow dogs, for the cats' sake. Yet another Japanese island known to be a cat-centric island is Manabeshima, with a decent population of friendly cats who frequently greet visitors. These Japanese cat islands first acquired their feline inhabitants for a variety of reasons, such as reducing the rodent population, and for good luck that the Japanese inhabitants often believe cats can bring about.
Posted by The Menagerie Mom at 4:54 AM

Evan that is the problem when we allow a hooman to do a cats work. You still are handsome as anything my friend and hope you see something fun out the window

Who cares about ears when there is that sweet ginger profile!

Evan, you are looking so good in your selfies. Good thing mom was there to help. There must have been a very busy day of snoopervising. Thanks for sharing. Have a wonderful Sunday.
World of Animals

Cute selfies Evan- even if we don't get to see those adorable toesies. I like the drawing even though I am not a beach person either. And I did not know that many places had so many cats. I am glad they are cared for, but wish they all had forever homes with humans of their own.

Cats are very good luck, and Evan, better luck next time you pose!

Evan, your prifile selfie is awesome, even if Mom cut your ear off. You're just so handsome!

Evan, selfies are so human!
I wonder if any of the cat islands practise TNR...too many kittens is NOT a good thing!

Aww, great selfie, Evan, a most studious study :) Great material for the photo fails too, MOL Your beach holiday in July does look rather tempting as there aren't too many foreign tourists plus you have sun, too. I wonder though if Santa can be persuaded to visit early ?
Purrs
ERin

Well Evan even with your paws missing and part of your ear missing you still have a wonderful profile for selfies!