Woof Woof Wednesday with a Rhyme on the Side

It's time for a pouty puppy snout shot! 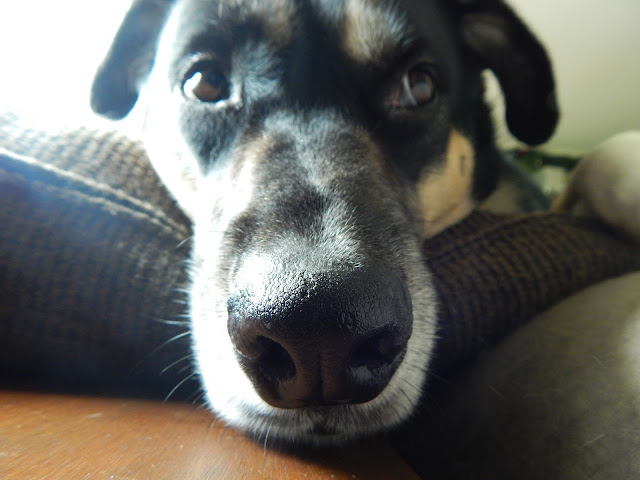 Do you see the little scar above Astrid's left nostril? A couple years ago, I don't fully know how, but she lost a little chunk of her nose. She just walked up to me one day when we were all relaxing at home, and she had a little pink spot on her nose where she'd lost a bit of flesh. This pup does like to bury food bowls and chew bones with her nose, so perhaps she got a little too flamboyant doing that and lost a bit of skin. Ever since then, Astrid's had that little indentation on her nose. I think it's kind of cute.

Now, we're doing things a little differently today. Each week, we participate in Angel Sammy's Thoroughly Poetic Thursday challenge. This week, since Thursday is Independence Day in the US, we'll be dedicating our post to that. So, we're sharing our poem today. We hope you don't mind!

Our poetic host always shares a photo to help guide us. This week's image is this wonderfully chilling one here:

I adore this image. As a person who loves spooky, atmospheric things, and whose favorite holiday is Halloween, this photo made me so incredibly happy. I'm going to be honest, the first thing this image inspired me to do was doodle up my own version of it. So, I did just that, and then I wrote my poem with both images in mind. That being said, I don't know that I really like my poem, or that it represents either the original image or my doodle all that well, or that I even successfully got my ultimate idea across well. But, I at least had fun writing the poem, and doodling up my own version of the spookishly stunning image above.

The witches lived upon the great big hill,
In a house that evoked fears and chills.
It moaned and groaned with every windy gust,
Its sides adorned with rotten wood and rust.
Eyes of the cat familiars could be seen in the warped windows,
Staring straight into each and every passerby's soul.

That is why the townsfolk quaked in their shoes,
When a witch appeared in town one summer day at noon.
She wore a long black gown to go with her bright red hair.
Atop her head was a pointy black hat sticking straight up in the air.
On her shoulder sat a poised and admittedly regal cat,
Just as black as the witch's pointed hat.

The witch walked down the road and right into town,
Either oblivious or uncaring of the townsfolk's frowns.
The witch and her cat first stopped at Dora's Diner,
Where she ordered two tuna plates and a glass of hot cider.

The witch and her cat took their time eating.
No other patrons were willing to remain seated.
They all stood and left in more than a hurry,
Something that made Dora the diner owner a tad bit surly.
Not that she would ask the witch to leave, though.
She wouldn't risk that, oh no.

Finally, the witch and the cat finished their meal,
And thanked Dora with words ever so sincere.
When the witch and her cat made their way back out to the street,
The townsfolk gave them space of more than a few feet.

It was to the shops where the witch and her cat headed next.
In fact, that's where they spent hours that numbered nearly ten.
The witch perused and bought a handful of things,
Including a set of pots and some colorful string.

By the time the witch finished and left the shops,
The moon had replaced the sun way up top.
Much to the townsfolk's relief,
The witch began taking the road out of town on her own two feet.

Suddenly, though, the witch stopped in the middle of the street.
It seemed there was something she did see.
She was facing the one street lamp whose light had gone out.
The townsfolk wondered what this was all about.

The witch whispered something to the cat on her shoulder,
And to the lamp they stepped even closer.
The cat's tail flicked back and forth,
With really a great deal of chilling force.

The townsfolk felt a great wave of fear,
When out of thin air a ball of flame did appear.
The fire flew from the witch and her cat to the street lamp that stood dark,
So that right before their eyes it suddenly glowed bright and sharp.

Indeed, the lamp was no longer dark after that.
The witch petted her cat and straightened her hat.
Old Mrs. Crank was the one who finally did plea,
"Witch, won't you just go on ahead and leave?"

The witch and her cat turned right around,
Until they faced the woman who had made the sound.
"Oh," the witch said, "are you talking to me?"
"Of course I am," Mrs. Crank said and stepped back a few feet.

A smile formed on the witch's pale head,
And with that smile she said,
"What makes you think I'm a witch?"
Really, you have your facts quite switched."

The woman again straightened her pointy hat,
And promptly reached up and petted her cat.
There was again great swishing of that tail,
And the woman introduced the cat to the townsfolk as Gail.

"We'll be gone now," the witchy woman said in a happy tone.
"Gail, will you please take us home?"
The black cat named Gail made a quite evident nod.
Then, with a swish of its tail and a meow they were quite suddenly gone. 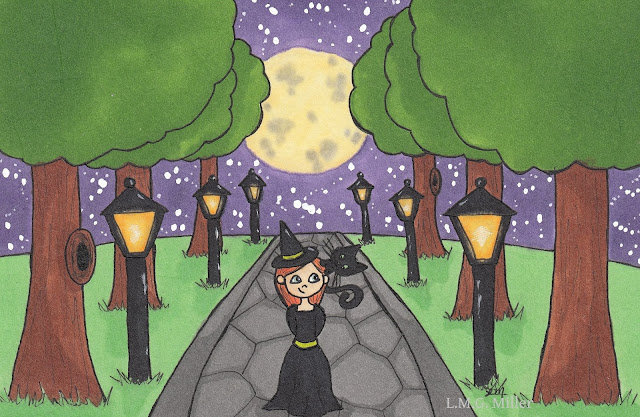 Although I rarely get any, I love hot cider! Adorable story/poem today, and love the doodle. Yes, I know all about the 'black cat syndrome', which is why I saw Manny and CB in the adoption center, I just had to have them. The Hubby and I will have a black cat in the house for the rest of our lives.

We think that's a beautiful photo and your poem is INCREDIBLE! Love the doodle and yes, sadly, we know about adoption rates for black cats and dogs. We've educated some of our neighbors about just that and happily can report, two separate families intentionally adopted black kittens and an adult dog!

Astrid is such a sweetheart, I have been so dazzled by her I didn't even notice!!! Shame on me * sigh *

Astrid, we just love the cute nose of yours. We never noticed the scar from all those Wednesday looking out the window posts. Thanks for sharing. Have a great and safe upcoming holiday.
World of Animals

That doodle and your poem makes me wish it was Halloween even more than I already do! Love your nose, Astrid!

Astrid is a cutie. I do wonder how she hurt her nose. Great poem, as always. You have such a wonderful imagination. I love the drawing too. And sadly I did know about black cats and dogs having a tough time being adopted. I am proud to say I have 4 black cats. :)

We do try to point out the exceptional friendliness of the black cats and tuxedo cats at the shelter, even so, they are the slowest to be adopted. It’s sad because they are very loving!

We love Astrid's photo, and her little scar is adorably different. Wow, Mom Lorianne ... that poem you wrote is fabulous. So imaginative!