Hello and happy Thursday to one and all! We'll get right to our rhyming for Angel Sammy's Thoroughly Poetic Thursday challenge.

Our poetic host never leaves us stranded at sea. Rather, we're always given a photo prompt to guide us. This week's prompt is this fun one here:

That there photo reminds me of the summers during my childhood. I can remember flying kites on many occasions during my childhood summer breaks from school. Speaking of summer break, my poem ended up being inspired by not only the image above, but by some of the parents I know who have expressed to me how it is having a kid during the summer months. I decided to just start writing a poem with that in mind, and to see where it went. That resulted in this:

Franny and the Nanny

Summer was a time for parents to lament.
After all, in the summer school was no longer in session.
Children are indeed a wonderful thing,
But they also can drive their parents insane.

Franny was a sweet and happy little girl,
But she was filled with energy, spins, and twirls.
She could spend hours upon hours in play,
Running and dancing and frolicking all day.

Franny's parents appreciated their daughter's lively nature,
But keeping her entertained could be a bit of a labor.
When she was home from school in the summer,
Her parents weren't sure if it was a blessing or a bummer.

By the time July rolled around,
Franny's parents knew their sanity was not sound.
They loved their lively daughter dearly,
But she simply left them far too weary.

And so an ad was put out for a brave soul of a nanny,
In hopes someone might be able to better entertain Franny.
Franny's parents immediately hired the first nanny to respond,
But this applicant was not what they expected at all.

When the nanny showed up at the door,
Franny's parents' jaws nearly dropped to the floor.
This nanny was small, grey, and whiskered.
She also had a tail and a meow that came out as a whisper.

Franny's parents were about to turn the nanny away,
But Franny ran in and immediately asked the nanny to play.
The nanny appeared to offer a shrug,
And then she followed Franny, after scratching the rug.

Franny and the nanny spent the entire day together,
Entertaining themselves no matter the weather.
When it rained all morning and then through lunch,
The nanny supervised as Franny made a pie and a bowl of punch.
They ate lunch together as Franny sipped on tea.
Franny's parents didn't once have to address their daughter's boredom or pleas.

After Franny and the nanny finished their midday meal,
The little girl looked outside and squealed.
She clapped her hands and did shout,
"It's not raining, and the sun is out!"

That's when Franny ran straight out the door.
Her parents worried the nanny would want to be there no more.
Instead, the nanny took a seat at the window,
And never once took her eyes off the girl running to and fro.

The little girl skipped and hopped and of course flew her kite.
Franny was the kind of little girl who did easily excite.
That's why her parents worried the nanny would eventually grow tired,
And that the nanny's desire to stay would expire.

All throughout the afternoon, though, the nanny remained.
She watched out the window as Franny's energy never once waned.
When evening drew near,
Franny's parents felt more than a bit of fear.
Would the nanny say she'd had enough?
Would she have grown weary and leave in a huff?

It was Franny who hugged the nanny and asked,
"Nanny, tomorrow won't you please come back?"
The nanny mewed and stretched and yawned.
Then she purred and said, "You act like I planned to be gone.
I'm moving in, didn't you know?
I have no intentions to leave or go."

Franny's parents had not been made aware of that fact,
But Franny certainly cheered, skipped, and clapped.
The then nanny accompanied Franny up the stairs,
And from that day on she gave Franny the best of care. 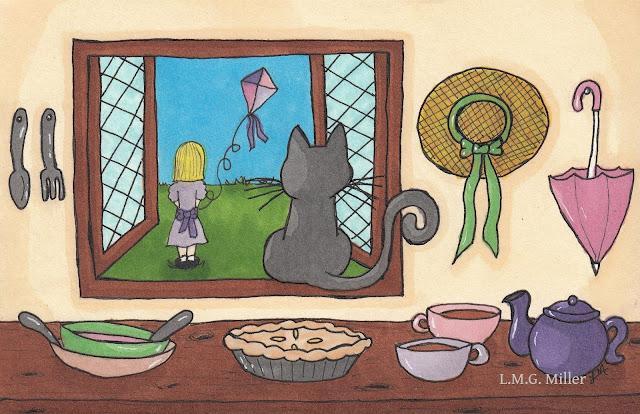 It's of course now time for Thimble and her Thankful Thursday thoughts. We were going to share a photo or two of Thimble, but then Google did it again. We've talked recently about how, since we upload and save our photos to Google Drive, Google often uses our photos to create little animations for us. One of the most recent ones stars Thimble. Actually, it stars her adorable little toesies.

Thimble is of course thankful for her toesies, because they're not only cute, but they also help her walk to places like her food bowl. This here mom of Thimble's is also very grateful for those toesies. Honestly, I can't even handle how cute they are.

As always, we're also so thankful for this amazing community of bloggers. You're all spectacular and wonderful friends!

***
Did you know?
Did you know that cats use their feet as a form of communication? This is because the paw pads contain scent glands, which cats often use to leave behind cues for other cats. This is one of the reasons why cats have a tendency to scratch on things. They indeed scratch to sharpen their claws, to stretch, and as a visual display, but also to leave their scent on items in their environment. The pheromones that cats leave behind are a territorial message to other cats in the area.
Posted by The Menagerie Mom at 6:06 AM

Let's go fly a kite, up to the highest height! Those are some darling toesies! Good info on foot pads, I didn't know that.

Awwww, we love Franny too and those special Thimble toesies! Thanks for joining the Thankful Thursday Blog Hop!

Reading your poem/story made me think of how my parents raised six children, with no immediate family nearby to help out. Seems an impossible task, with my father out of the house during the weekdays.

Love your poem. You do these so very well.

Not participating in Friendly Fill-ins this week. We're going on a cruise with our yacht club.

Those toesies are too cute!

WOW how amazing of Google to do something with your pictures! I love those toes!

I love the poem! A kitty is the perfect nanny for a child as you know from your childhood. Cute drawing too. I look forward to your fill-ins :)

Now that’s a great nanny, a friend through thick and thin.

Would you believe I've never flown a kite? And I just have to try out that Google Drive feature...

We love your poem. Mom hasn't flown a kite since the kids were little, MOL Fenris doesn't like them. And the Goodyear Blimp drives him nuts.

Love the animated Thimble toesies! Also love the poem - I think the BEST nanny would be a kitty so I loved every word of this poem of yours. Thanks for being one of our regular participants in Sammy's Poetry Day.