Boy oh boy, do I have a weird doodle for you today. Doesn't that sound promising? Yeah, I didn't think so.

I'll preface this further by saying that this upcoming week contains the date of July 25th, for those who might not have noticed. That date is what some call the true Christmas in July. In honor of this summer festivity, in the upcoming days I'll be sharing some doodles inspired by Christmas in July. However, before that, I couldn't leave out another of my favorite holidays. That is, Halloween. There's a Christmas in July, so why not a Halloween in July? Indeed, I tried my hand at a Halloween in July doodle. The result was, well, strange. See? 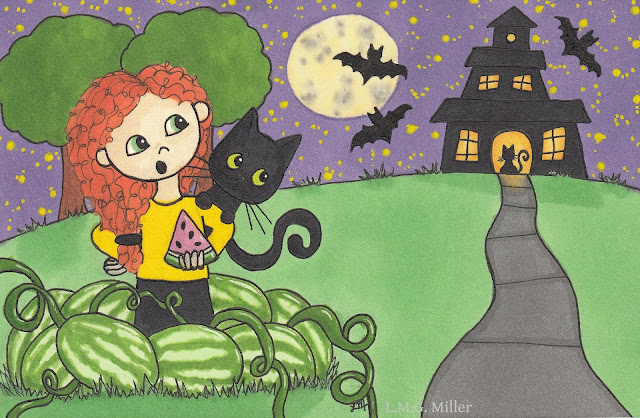 ***
Did you know?
Did you know that bats are a mammal, and that they're the only mammal that can truly fly? Did you know that a full-grown bat can potentially weigh less than 1 oz.? And did you know that bats have tiny teeth that sometimes leave little to no evidence that they've bestowed a bite? What's more, bats are also somewhat of a contradiction when it comes to rabies. One truth of the matter is that bats are one of the primary animals known to carry and transmit rabies. On the other hand, the CDC has also reported that most bats don't, in fact, carry rabies. A study even showed that of bats who were captured, and even presented as sick, only 6% proved to have rabies.

All of the above being said, do be aware of your kitty or pup's health and safety when anywhere that might be frequented or inhabited by bats. Such areas might include tree-heavy regions, especially at or near nighttime. Also be aware in or near buildings with attics or other rooms into which bats might find a way and take up residence. As indicated earlier, bats are small creatures with tiny teeth that leave little to no marks. For this reason, it might difficult or impossible to know that your kitty or pup, or even yourself, has been bitten. This can be especially dangerous in the case that you do come across a bat that has rabies. Signs of rabies in a bat might include the bat flying around during the daytime, the bat being spotted in an especially uncharacteristic location, the bat being easily approached or caught, or a bat that simply acting sick or weak. Bats may be an intriguing species, but don't forget that they can pose a potential danger to your furbabies and yourself. Should you have a concerning bat encounter, contact your local animal control or other responsible authorities.
Posted by The Menagerie Mom at 5:14 AM

Halloween in July sounds pretty fun to us. WE love that doodle! :)

Maybe each trick or treater could have their very own watermelon, though they would not have room in their bags for any candy.

Cute! TW saz she wants some of what you're smoking. MOL!

That is beyond brilliant. I think the only thing I miss about summer during the rest of the year is watermelon. Other than that...bring on Halloween and Christmas!!!

I LOVE your drawing! Halloween is my favorite holiday. I can't wait for fall.
I always think of bats as having rabies, that is interesting.

How i love bats! We have some at our zoo, and i will watch them for hours, they are the fruit eating bats. The ones that eat mosquitoes are most welcome, too.

Yes, precautions should be taken to not actually come near them, just like with any other wild animal.

We actually think Halloween in July would be a GREAT idea, you could count on it being hotter than Hades so you would know how to dress. One of the things Mom always disliked about Halloween was not knowing if it would be Hot or Cold, sometimes it is still very hot down here on Halloween other times a cold front moves in and it's freezing so it's hard to pick out what you want to wear until the day. So you have to have two costumes.