As we've mentioned on more occasions than one, Eddy is our resident blooper queen. In fact, as per usual, she was our star in the Pet Photo Fails! Blog Hop on Friday. However, sometimes Eddy actually can sit still for more than half a second. Sometimes, she even manages a clear, focused selfie. She did just that for today, though this here human assistant of hers didn't quite set up the zoom properly. As a result, Eddy lost her ears and chin. 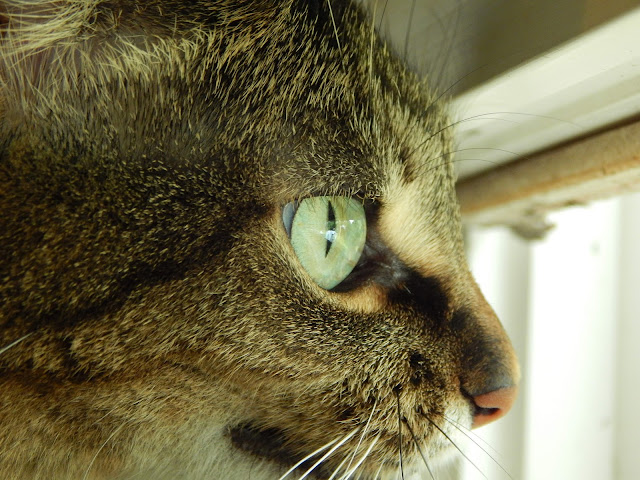 Of course, Eddy snapped this selfie for the Sunday Selfies Blog Hop, hosted by the Kitties Blue over at The Cat on My Head.

As I've mentioned over the past couple of days, lately I've been feeling inspired to scribble up doodles of a more magical sort. In particular, I've been sketching up some Harry Potter-esque doodles, but with cat-centric subject matter. Today's doodle of this sort looks somewhat similar to yesterday's, and that's because I created them simultaneously and indecisively. 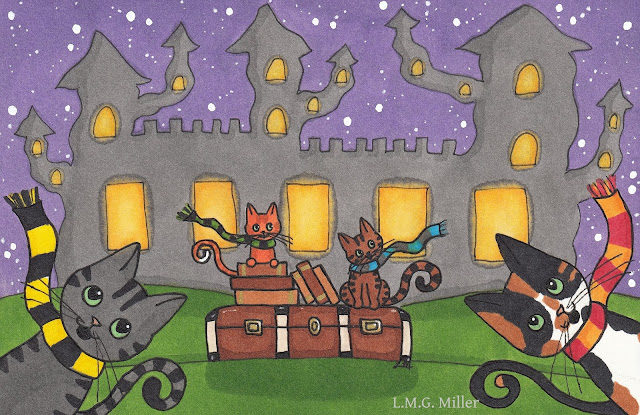 ***
Did you know?
Did you know that, because a cat's eyes are disproportionately large compared to their body, a cat can't see anything less than roughly a foot in front of them? This would explain why a cat can focus in on prey from a distance, but can't manage to find the treat you just placed right in front of their face. The size and resulting composition of a cat's eyes is in large part why they simply can't see or focus on something placed directly in front of them. To help your kitty find a nearby treat or toy they can't locate, try putting it in motion or moving it to a farther distance.
Posted by The Menagerie Mom at 12:03 AM

Yes BUT you managed a magnificent clear and sharp eye. The focus in INTENSE and speaks volumes!

Nature, and Eddy, have the BEST colour palette in town, for sure. A gorgeous selfie that really doesn't need the chin or ears to make it work.
Purrs
ERin

Eddy's eyes are a beautiful color....this is a GRAND Selfie!

Eddy has BEAUTIFUL eyes!
And We loved the doodle, too.

Wow, that's a great close up of Eddy's eye. So pretty!

Such a clear and detailed selfie - I feel like I could reach out and touch beautiful Eddy!

Beautiful indeed, Eddy. Great profilie and such a lovely doodle. Pawkisses for a Happy Sunday to all of you🐾😽💞

Beautiful selfie, Eddy! The eyes definitely have it! :)

Eddy does have gorgeous eyes. Cute drawing too. And yes, I knew that about their vision. :)

Those are beautiful eyes and a fun doodle and yes, you do have to put the treat where they can see it and smell it for them to find it.

Just like The PO'M, Eddy has beautiful eyes, and gorgeous fur and whiskers! I love the long, curly tailios on your doodle cats.