Happy Friday! We're ready to fill in some fill-ins. Are you? In case you missed the fill-ins statements yesterday, we'll share them again here. Ellen of 15andmeowing came up with the first two, and I came up with the second two.


I filled these in myself, and my attempts are below. My answers are in bold.


1. I am able to speak the word "no" to my cats, but I won't.
(It's simply not wise to use the world "no" when speaking to a kitty. That's what my kitties told me. Also, my cats are cute, and they know it, and they use it against me. I can't deny them what they want. My kitties have turned me into a pushover, but I'm okay with that.)

2. I won't ever give pup Astrid a chew bone that contains dye again.
(I once bought Astrid a chew bone that was unnaturally orange. It obviously had to contain dye to be that color, but since so many pet toys these days are unusual colors, I didn't think anything of it. It was the only bone Astrid had ever chewed, though, that was an unnatural color, and that thing made her lips blow up like balloons. Her lips also became blistered and sore, and I felt terrible. The vet gave us some cream to put on her lips, we took the bone away, and all was well. Needless to say, Astrid now only gets to chew on bones that are dye-free and far more natural in color and overall content.)

3. The current chapter of my life would be titled "Is It Autumn Yet?"
(Can you guess which season is my favorite? Spoiler alert. It's autumn.)

4. I've been meaning to clean my garage but haven't yet.
(A while back, I unfortunately started using my garage as what I intended to be a temporary storage space. I did this after I inherited a large number of family heirlooms after my paternal grandfather passed away, and after my maternal grandmother entered a nursing home. I inherited so many items in a short amount of time, that I felt overwhelmed and simply put them all in my garage to sort out later. The problem, though, is that the garage that was supposed to be a temporary storage space ended up getting abused and neglected, and now a complete overhaul is required. I'll be working on said overhaul of my garage over the next few weeks. I'm so excited.)

Are you ready for your Eddy fix? We actually have a clear, non-blurry Eddy shot for you today. In order to achieve such a shot, I opened my bedroom window for Eddy so as to distract her. I did this on a 95°F day, so that was fun. 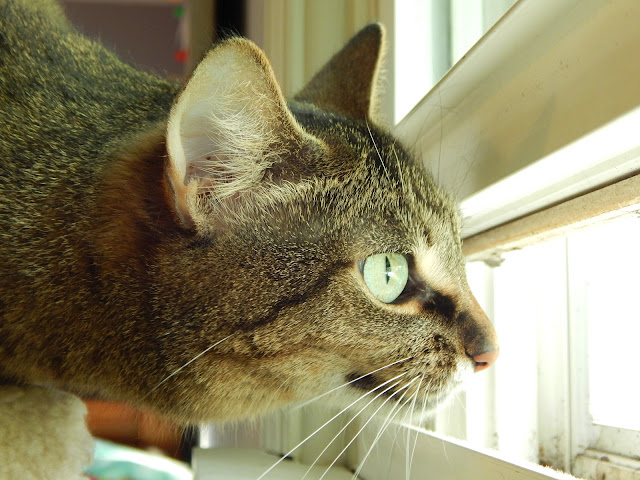 We hope you're all staying cool out there! Happy Friday!

***
Doodle of the Day: Flashback Friday

At least for a while, I'm going to slightly change up the doodles I share throughout the week. There will indeed still be a doodle to go with every daily post, but roughly two days each week, I'm going to share a flashback doodle from the past couple of years rather than share a brand new doodle. On the other five days of the week, the doodles will be brand new ones you've never seen before.

One reason for this slight change relates to something I've mentioned here before, and that's that one of my goals and dreams in life is to write, illustrate, and publish some of the random stories living inside my head. I've been working on these stories, but, as I've also mentioned somewhat recently, some of the stories I had planned out have become far bigger than I originally thought. With that revelation, I've come to realize that I need a bit more time each week to fit writing in with my other hobbies and my full-time job. I also would like a bit more time to spend on blogging and visiting you friends of ours, because I have fallen shamefully behind on that.

We'll do our first flashback doodle today. This one stems back to May of 2017. 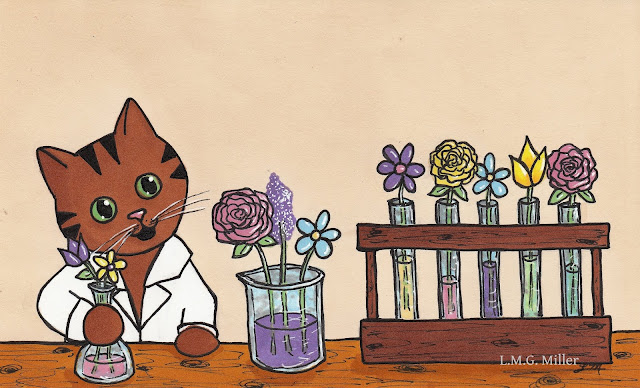 I created this doodle in part because I work as a lab tech in a chemistry lab. I remember feeling compelled to scribble up a doodle that made that job look a little prettier than it is. I also remember feeling inspired by the concept of the line between science and nature.

I'll admit there is at least one thing that really bothers me about this doodle, and about some of my other past doodles, and that's that I omitted this kitty's tail. I don't know why, but I used to just not give the kitties in my doodles tails if they were sitting behind something, such as how this kitty is sitting behind a table. Nowadays, I always give the kitties in my doodles tails, no matter what. I make myself find a way to squeeze that tail in there, because I can't stand to see a kitty I've doodled sitting there tailless.

***
Did you know?
Did you know that Albert Einstein was an animal lover and pet owner? He was known to have a cat, a dog, and a parrot. It is said that the cat's name was Tiger, the dog's name was Chico, and the parrot's name was Bibo. According to some historical sources, Einstein's pet bird required a great deal of medical care, and that Einstein would often try to cheer up his bird by telling it jokes.
Posted by The Menagerie Mom at 6:16 AM

Good idea to use flashback doodles so you can have more time for all the OTHER things you do! You especially need to get all that creativity of yours into book form as you are so very talented. I love this doodle of "Lab Tech Kitty".....!

Dontcha love the way Eddy's fur has so much color and depth? I love tabbies! I like your cat tails, 'cause you make them so long and curly. We are behind you 1,000%; life is too short not to focus on your goals.

Great answers, except I feel bad for Astrid, that must have been awful. I am with you waiting for autumn. My answers was I want to move to Alaska ( I figure it is cooler there). That is a good shot of Eddy. And I love the flashback doodle. I don't remember it from 2017. I am glad you are working on your stories and illustrations- I look forward to reading them someday. Have a wonderful weekend! XO

It’s the story of our lives, we put something someplace “for now” and that ends up being way longer than was intended.

Flashback doodles sound like fun, a good doodle should see the light of day more than once anyway.

Amen to #3!!! I'm sure you won't be surprised to learn that Mudpie never hears the word NO either ;)

It's not a proper Friday without Eddy!

Oh that peep out the window is SO CUTE!!