Yesterday, Thimble shared a selfie of herself gazing out our back door. Today, Evan wanted you all to know that said door is also one of his favorite places to be. And, of course, Evan makes sure he gets his fair share of time there. 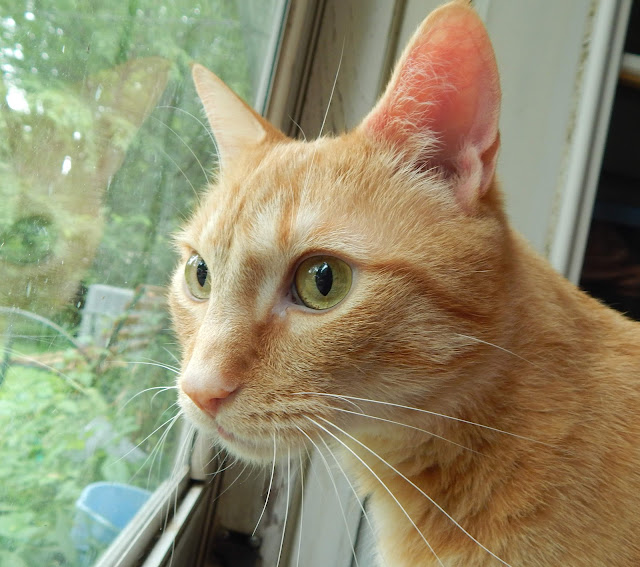 I recently doodled up and shared with you all a pastel sort of kitchen scene. Soon after I finished scribbling up that scene, I decided I fancied drawing yet another kitchen doodle, but with a completely different sort of atmosphere. I don't even know how to describe this one, but it's certainly different. 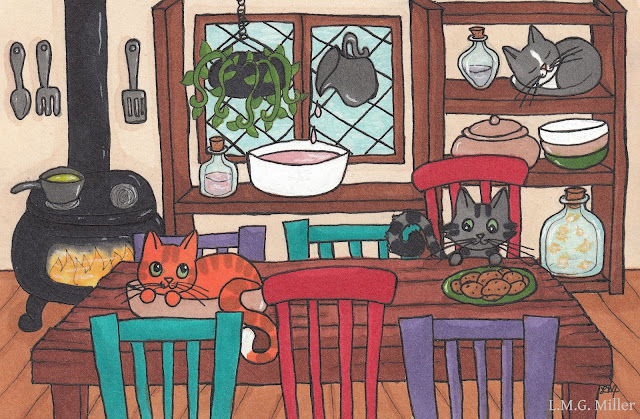 ***
Did you know?
Did you know that Winston Churchill was a lover of cats, and that one of his cats was an orange tabby named Jock? Before Churchill passed away at the age of 90 in 1965, he saw to it that Jock would continue receiving proper care and that he would remain living at Churchill's home, Chartwell. What's more, one of Churchill's dying requests was that there always be an orange tabby named Jock living at Chartwell. Churchill's wish has been granted over the years, and Jock VI currently resides at Churchill's home of Chartwell.
Posted by The Menagerie Mom at 12:39 AM

That door is a popular place!

Evan's got his eye on something out there! Love the new kitchen doodle.....this one is like a "Cottage Kitchen"!

Evan, it is always good to see you. You are looking good too. You all have a fantastic week.

Looking pretty sharp and alert there, Evan! Your doodle could almost be our kitchen with kitties here and there, and even someone up on the table where they shouldn't be!

Evan, that is an amazing photo of you today - very handsome. Cool info on Jock, that is awesome!

Evan, you keep your peepers on the critters outside! Have you ever seen the movie, "The Eagle Has Landed"? I won't give the story away, but Winston Churchill is a big part of it!

Happy Mancat Monday, Evan!! We think you have the best spot for watching outside tv. Love the selfie that you shared. Have a fun day and look out for those pesky squirrels.
World of Animals

Hi Evan! Something sure has your attention outside.

Great shot of Evan. I love the drawing- the different colored chairs are cool. And I did not know that about Winston Churchill.

What a cozy kitchen! Enjoy your view, Evan!

Somehow that makes Churchill much more “human” in my eyes. He was a living legend in so many ways.