Happy Christmas in July, friends! It is, after all, July 25th. And you know what? That sort of (but also sort of doesn't) have a lot to do with our rhyme for the day.

Indeed, today is Angel Sammy's Thoroughly Poetic Thursday challenge. And, as always, our host shared a photo prompt to guide us.

Given that today is July 25th and I've been scribbling up all sorts of festive summer doodles, I indeed had Christmas in July on my mind when I saw that there image above. I asked myself how I could use that image to scribble up some sort of rhyme that was reminiscent of, of course, Christmas in July. Then I realized how laden the photo prompt was with the Coca Cola memorabilia. Does Coca Cola automatically make anyone else immediately think of those festive polar bears who so often advertise for Coca Cola? Because that's what I always think of, and so that's where I tried to go with my poem. I don't know how well I succeeded, but here it is nonetheless:

Cole is a big, white, bear of a soul,
And he loves living where it is colder than cold.
In case we're not making it clear about Cole,
He's a polar bear living in the great North Pole.

On one fine summer day Cole strolled outside.
The temperature out there was a great big surprise.
Usually it didn't rise above 32 Fahrenheit in degrees,
But today the degrees counted a whopping 33!

Cole worried and fretted and drove himself nuts.
What if this heat wave melted his icy little hut?
Cole felt like he himself might, in fact, be melting.
He needed to find something else on which to be dwelling.

Cole had a bright idea to help himself cool down.
All he had to do was make the short walk into town.
A cold drink surely would do the trick,
And so Cole put on a scarf and headed out quicker than quick.

Just outside of town, Mr. Fox emerged from his cold home.
He nodded to Cole and greeted him with, "Shalom."
"Isn't it downright sweltering out here?" Cole did say.
"I fear we're all going to melt into puddles today."

Mr. Fox shrugged and replied, "I hadn't noticed.
It's as cold as cold can be, or my name's not Otis."
"But your name isn't Otis," Cole reminded him.
Mr. Fox shrugged with the opposite of a grin.

"Well," Cole said, "I'm off to the Polar Pop Shop.
At least there I can get a cold drink and cool off."
Mr. Fox shook his head as he said, "Polar Pop.
What a ridiculous name for a shop.
Does no one know the stuff is called soda?
That's like calling coffee something as silly as mocha."

With that, Cole wished Mr. Fox a good day.
And then to the Polar Pop Shop he went on his way.
He took a seat at the little shop's bar,
Where he was served pop, or perhaps soda, in a wonderfully cold jar.

Cole spoke for hours to the little shop's owner,
That being an equally white bear of a soul named Homer.
They both drank pop, or soda, or whatever, out of bottles,
Wondering if outside it was growing hot, and then hotter.

When the top of the bar was filled with their glass bottle dregs,
It was the Polar Pop Shop's owner Homer who said,
"You know, I have a thermometer just right over there.
Let's see if the temperature on it will give us a scare."

Preparing himself by drinking one final pop,
To the thermometer Cole's eyes then did hop.
It told him the degrees had lowered back to a glorious 32.
When it then fell to 31 and 30, Cole thought a great big, WHEW! 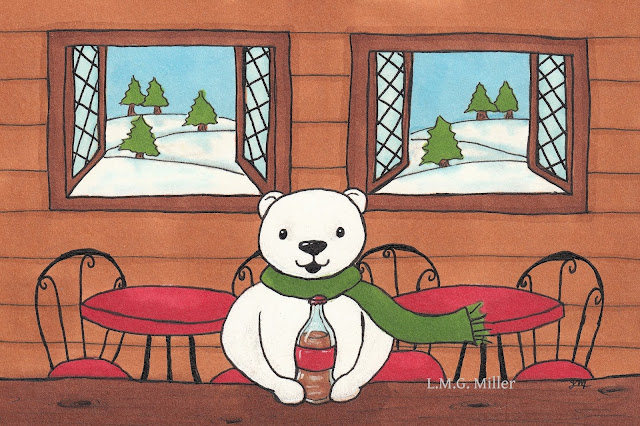 Now we're on to Thimble and her Thankfuls. 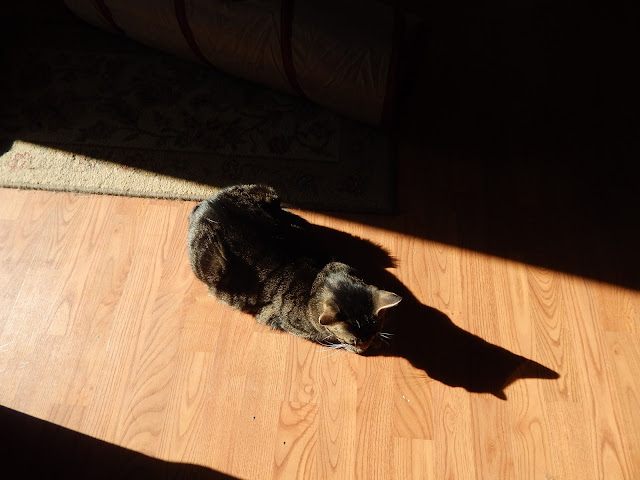 Thimble is obviously so very grateful for those warm sun puddles. 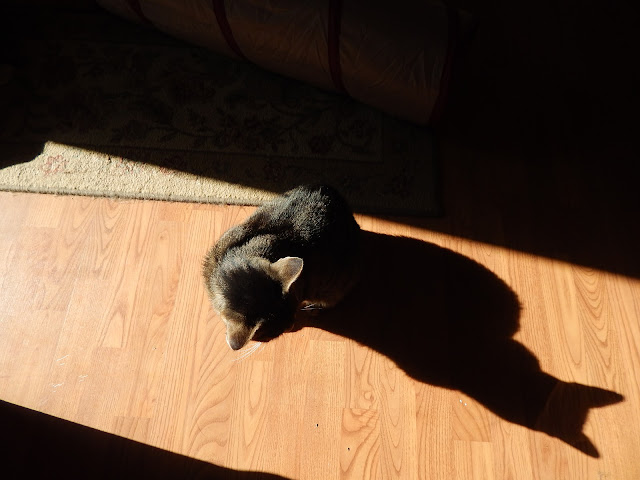 This little ladycat almost said that she was grateful that her shadow revealed her to be the new Batman, or more like Catwoman. But, then we all remembered that a straight up kitty is way better than either of those. So, Thimble is grateful to be a stunning little tabby lady with a stunning little shadow.

We are also, of course, beyond thankful for all of you. And thank you to Brian of Brian's Home for hosting none other than Brian's Thankful Thursday Blog Hop!

Last but not least, how about we share the fill-in statements for tomorrow's Friendly Fill-Ins challenge? Ellen of 15andmeowing came up with the first two, and I came up with the second two.

***
Did you know?
Did you know that polar bears are found in the North Pole, and penguins live in the South Pole? This means that, though the two species are often displayed together in various forms of art, they literally live on opposite poles of the world as each other. The North Pole has a decent amount of connected land within a reasonable distance. For this reason, it is more conducive to habitation by land animals, such as polar bears, Arctic foxes, Arctic wolves, and of course reindeer. The South Pole, on the other hand, is largely surrounded by significantly long stretches of freezing cold water. This is why it is more heavily inhabited by animals who are capable of living and swimming in such conditions, and those animals include penguins, seals, and whales.
Posted by The Menagerie Mom at 5:20 AM

It's not only the kitties who enjoy a good sun puddle. Sometimes we hounds enjoy one too, especially in the winter, summer not so much.

That was such a fun poem and Thimble, you are a beautiful Catwoman sweetie! Thanks for joining the Thankful Thursday Blog Hop!

"The name arctic originates from the word 'arktos' which is a Greek word that means bear. The name originates from ursa major and ursa minor constellations that represent the great and little bear respectively. They are seen in the northern hemisphere where they point the north star, hence the name Arctic." Arctic is where there are bears, and Antarctica means no bears! Cool, huh?

I like the Polar Bear doodle, we need to think of cool things this time of year! Thimble, you cast a big shadow beautiful!

Oh I really love this poem/story and I do always think of the polar bears relative to Coca-Cola! Some things stick with you - those commercials were always so cute. I love the places people's imaginations go based on the photos Angel Sammy sends us - next week's is going to be another fun one. Thimble looks quite happy in her sunpuddles....I think she makes a great CatWoman!

Happy Christmas in July!! We loved the cute poem that you shared. Thimble, you love your sun puddles. Such great Thimble photos and doodle drawing. Thanks for the share. Have a wonderful day.
World of Animals

Your shadow is as darling as you, Thimble! And yes, polar bears are my first thought too when it comes to Coke.

I love your poem! And the drawing that goes with it. I did not realize penguins and Polar bears don't live near each other. Thimble is a cutie= I am glad she got her sun :)