Happy Friday! Are you ready for the Friendly Fill-Ins? In case you missed the fill-in statements yesterday, I'll share them again here. Ellen of 15andmeowing came up with the first two, and I came up with the second two.


Below are my answers, in bold.

1. I have been contemplating which book to read next.
(My to-read list looks something like Mount Everest, so my options are endless. I'll soon be ready to start a new book, so I definitely have a lot of contemplating to do.)

2. I want to talk an ear off about my cats.
(I'm not a very talkative or generally social person, I'll be the first to admit. That being said, when I find someone who likes cats as much as myself and wants their ear talked off about my furbabies, I'm game. That's very likely why I appreciate this community of cat bloggers so much. None of you judge me for rambling on and on about my furbabies.)

3. People should worry less about what others think of them and more about what they think of themselves.
(I recently heard someone make a comment very much like this, and I thought it was such a profound and true statement. All that matters is that you're happy with who you are, and that you know and embrace what makes you happy. If others don't appreciate you for who you genuinely are, then there's no need to give those people your time or worry.)

4. I want to make the world a better place by being a voice for the voiceless.
(I often feel so hopeless and helpless when I think of all those in need, both four-legged and two-legged. I feel like I can never do enough to help the plight of the homeless, hungry, and all those generally in need. One thing that gives me even an ounce of solace is realizing that even if I can't physically make rounds helping all those in need, at least I have a voice with which I can speak for them. This is one reason why I appreciate the Remember Me Thursday movement that aims to raise awareness for animals in shelters by being a voice for the voiceless.)

Today's shots of Eddy are yet more of her posing in the window. After all, that's one of the few places she'll actually sit still. 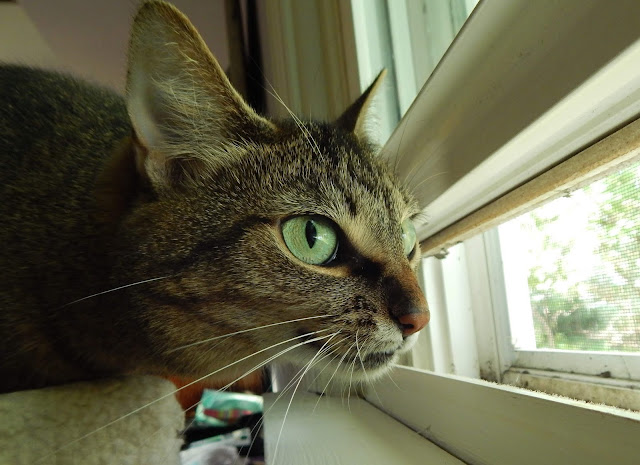 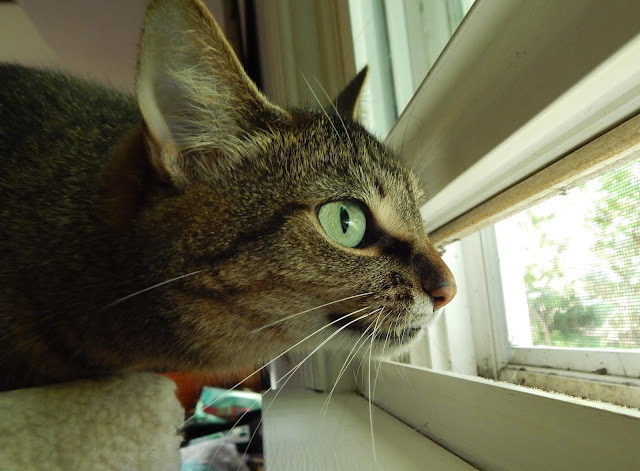 Have a fantastic Friday, friends!

***
Doodle of the Day: Flashback Friday

Today's flashback doodle is from March of 2018. 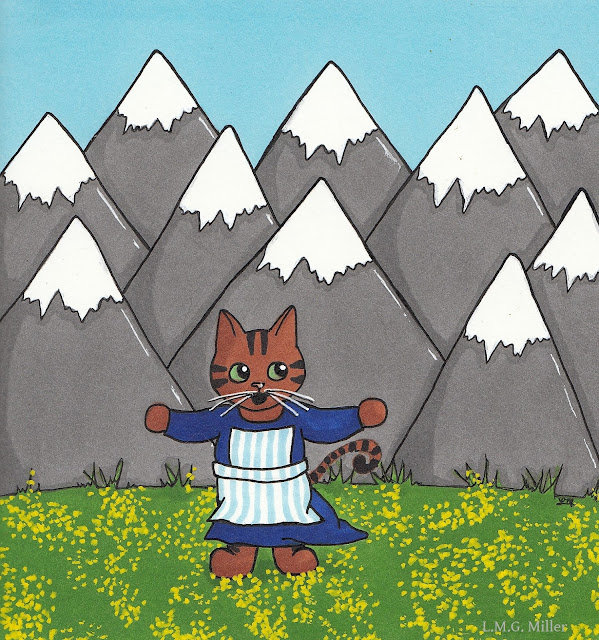 In truth, I've only ever seen The Sound of Music once ever, and it's not my most favorite thing in the world. Can you believe that I'm not really a fan of musicals at all? That fact drives my sister nuts, because she loves musicals.

Regardless of the fact that musicals aren't 'my cup of tea, I remember why I doodled up the above drawing last spring. The reason was, plain and simply, because I had a hankering to scribble up something that fell like spring. We were having us a lot of snow still last March, and I wanted to create something that didn't feel like winter. For whatever reason, the scene that came to my mind was the one with Julie Andrews dancing and singing in a field of wildflowers, so I doodled up the above. The title of the doodle is, of course, The Sound of Mewsic.


***
Did you know?
Did you know that the musical Cats is based on a collection of poems by T.S. Eliot, and that it was almost based on dogs instead? Indeed, the musical Cats is based on T.S. Eliot's cat-centric collection of poems titled Old Possum's Book of Practical Cats, published in 1939. Originally, T.S. Eliot had considered writing that very poetry collection about dogs. That being said, T.S. Eliot is reported to have been a fan of both cats and dogs, but his love for cats won out. It's been said that, regarding his decision to write his collection of poetry on cats instead of dogs, T.S. Eliot declared, "Dogs don't seem to lend themselves to verse quite so well, collectively, as cats." He was also reported to have said, "It would be improper to wrap [felines] up with dogs." Those very thoughts ultimately led to the creation of Cats.
Posted by The Menagerie Mom at 5:55 AM

Eddy,You are looking mighty good. Bet there is something good out that window. You all have a fine Friday.

Love your fill-ins. Spot on.

Great answers to all the fill-ins. I am the same way wanting to talk about my furbabies. Very true about #3, but easier said than done. And you do an excellent job already with #4. I love the drawing- it makes me want to burst into song- the hills are alive with the sound of music- be glad you can't hear me :) Eddy is adorable, nice shots. Glad they went with cats instead of dogs. :)Have a wonderful weekend. XO

Eddy, you are looking too adorable looking outside to see what's going on. We loved your friendly fill-in answers. Thanks for the share. Have a wonderful Friday.
World of Animals

Did you know you have a Celine Dion kid name?

The child was named after the jazz singer.

And that SOUND OF MUSIC pic Lorianne drew. I would draw a picture of the children in their drindls singing Do-Re-Mi. And maybe the goatherd song.

Wonderful, thoughtful answers. Mudpie is one of my favorite topics too :)

There are a lot more great books than time to read them all.

If i am behaving the way i know i should, and others do not like me, that is not my business, i agree with you.

While i knew the musical Cats came from Eliot’s book, i had no idea he ever contemplated writing it about dogs. That just would not have worked.

Great fill-in answers. At any time, we have bags filled with stuff for both the human shelter and the TNR. you go, Eddy!