Can anyone guess who today's troublemaker is? Are any of the furbabies here really troublemakers, though? Surely not!

If we were absolutely forced to showcase a potential troublemaker today, it would perhaps be a certain little calico named Tonks. 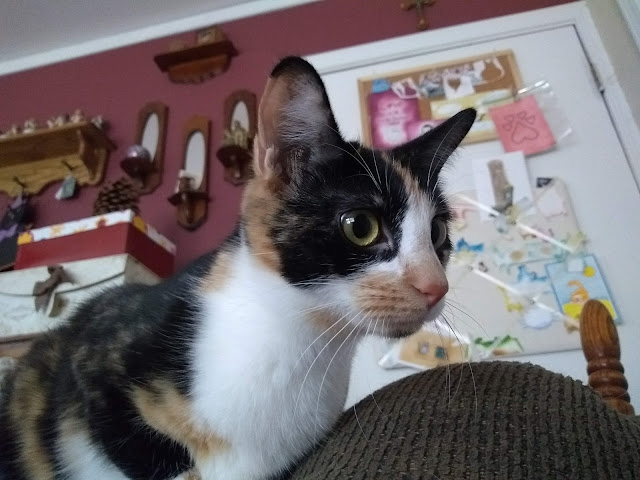 I haven't given an update on the whole Tonks vs. Eddy rivalry in quite some time. The truth of the matter is that Eddy still very, very, very much prefers if she gets my bedroom all to herself. The primary reason for this is that, to put it simply, Tonks is a great big bully to Eddy. Eddy is the only cat in the house that Tonks bullies, and Tonks is relentless about it. Tonks chases Eddy, corners Eddy, makes Eddy scream, hiss, growl, spit, and all that catty jazz. Eddy is a very skittish, high-strung cat by nature. These days, the only way she won't hide beneath my bed 100% of the time is if there is a baby gate up in my bedroom doorway, so that, you know, Tonks doesn't stalk and chase her. So, there is very often a baby gate up in my bedroom doorway. When that baby gate is up, Eddy is as happy as happy can be. Take the baby gate down, and she's back beneath the bed and you won't see her.

All of the above is not to say I'm not still going to continue with heavily supervised meet-and-greets, though. I have hopes that one day the baby gate can come down and everyone can come to some sort of compromise. Perhaps one day that will happen. Maybe. Hopefully. I won't stop trying.

In the meantime, Tonks loves to catch glimpses of Eddy through the baby gate that separates them. She can see through the baby, as well as over it when she picks certain seats in the house. I'm glad the baby gate allows Eddy to still see and hear everything that goes on in the house from her happy safe haven, but that also means it gives ornery Tonks an easy view of her. Tonks loves to stalk Eddy from her side of the gate. Isn't that so sweet? 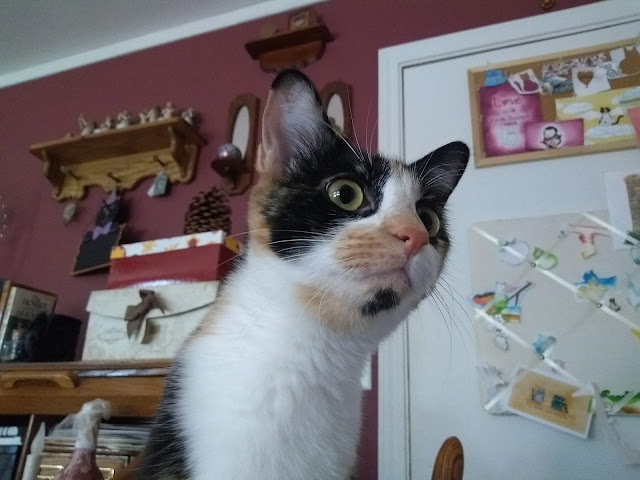 That there is a photo of Tonks trying to catch a glimpse of Eddy over the gate. Eddy is a loud little lady who likes to announce when she's playing, so Tonks always gets into place to watch her when she hears her. I wish that Tonks could turn that interest in Eddy into a playful attitude, but when I let her in my room with Eddy, she chases and corners her beneath my bed with something that is most certainly not a playful attitude. My sweet, ornery calico, could you perhaps stop bullying anxious Eddy? Please?

How about a little story to make this rambling post even longer? I'll try to make it quick. Though the baby gate in my doorway is usually heeded well by all cats in the house, the other day someone somehow managed to move it right on out of the doorway. Some kitty did this when I wasn't home, and I was quite honestly gone for the entire day. I have no idea how long Tonks was in my bedroom with Eddy that day, but let me tell you, Tonks was in full stalking mode and Eddy was not a happy girl when I got home. Though no one was injured in any way, it took me an hour to coax Eddy out from under my bed. What's more, ever since that day, whenever she sees Tonks on the other side of the baby gate, she lets out terrifyingly impressive hisses and growls, and then often runs away and hides. This always gets Tonks going.

One big happy family, huh? I find it quite intriguing that cats are much like humans in the sense that some personality types simply clash. Every cat in the house has a different relationship with every other cat in the house, and the relationship between Eddy and Tonks is still one of rivalry.

I guess I'll stop rambling now. We hope you're all having a day filled with happiness, peace, and quiet!


***
Doodle of the Day: Throwback Tuesday

Today's flashback doodle is actually one of the first ones I ever scribbled up of my calico girl Tonks. Tonks came to her forever home here on the 1st of June last year, 2018, and I drew this roughly 3 weeks later. I had already drawn a couple other doodles of her by then, but one day I found myself in a magical sort of mood, and so I scribbled this up for her: 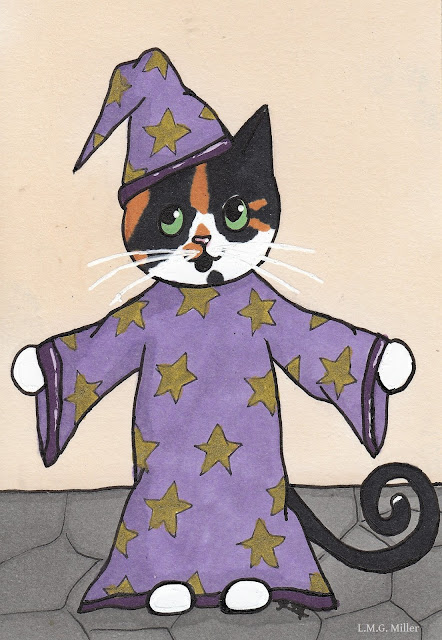 ***
Did you know?
Did you know that the calico is the state cat of Maryland? This has been the case since October 1, 2001. Maryland chose the calico as their official state cat because the tricolor kitty resembles the coloring of the state bird and the state insect, those being the Baltimore oriole and the Baltimore checkerspot butterfly, respectively.
Posted by The Menagerie Mom at 12:03 AM

Bear Cat used to do exactly that to Kitty. He was a kitten and she was 15 and he just refused to leave her alone. Worse, I couldn't really separate them well because Bear would flip out at a closed door. He definitely kept us on our toes. He can be a jerk to Ellie sometimes - but usually, it's pretty peaceful.

Tonks, you sure a pretty calico. Calico is one of Mom's favorites. Have a great day.

Luckily, our major clashes are behind us now. But it took quite some time for us to get to where we are today. Tonks, you are a cutie.

Da Boyz didn't chase or fight with Angel; just their presence too near to her made her scream and hiss. Luckily, she is enjoying her upstairs apartment, but I don't know what we'd have done if we couldn't keep them all completely separated.

We have two that fight on sight, and the only solution is a closed door and strictly keeping them away from each other.

It sounds like Maryland hit the trifecta with their state animals!

The Tonks/Eddy rivalry sounds so much like the Wally/Zoey rivalry. Zoey would stalk Wally and he would get so upset. And so would she. It was a mess. That's why Zoey ended up living most of the time in her own room...which she much prefers. I tried everything including consulting 2 different vet behaviorists to try to get them to at least tolerate each other to no avail. I hope Tonks and Eddy work out their differences and at least can reside somewhat peacefully together. ~Island Cat Mom

Wouldn't you love to know what creates these clashes? I hope they become friends one day.

Tonks is a cutie. Har to believe she is a bully, but I have sweet faced bullies too :) Joanie is like Eddy and gets all upset if any cat even looks at her which eggs them on. Cute drawing. And I didn't know any state had a state cat :)

Tonks, you sure are adorable. Do you really bully Eddy? If so, we hope you can come to an agreement at some point. We know your Mom would like that a lot!